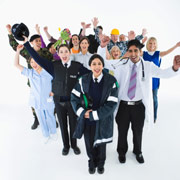 Minnesota’s conservative state legislative policymakers want to placed a “right to work” constitutional amendment on Minnesota’s 2012 ballot. This effort has nothing to do with the “right to work.” Instead, it would eliminate, by law, workers’ hard-earned protections in the workplace. This amendment would diminish and, in many cases, silence workers’ organized voices, leaving them to face well-organized employers on their own.

Twenty-two of the 50 American states are “right to work” states. Minnesota is not. In “right to work” states, workers are allowed to organize labor unions but are prevented from collecting dues from the workplace’s non-union members. Despite not paying dues, non-union members reap collective bargaining’s benefits. Minnesota allows unions representing non-union workers in organized workplaces to collect a “fair share” payment, representing the cost of the union’s collective bargaining and representation services.

“Right to work” legislation is aimed at hamstringing a union’s ability to fund its worker advocacy and protection activities. By permitting enough workers to opt-out, eventually the union is unable to function. Hard-won rights evaporate, driving wages down in a race to the bottom. Ironically, non-union workers lose as much, if not more, than their organized colleagues when collectively bargained workplace protections are lost.