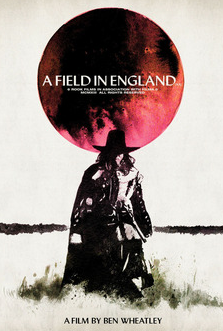 A Field in England

The conceit of mainstream cinema is that everyone should or will have the same experience in front of the screen, whether it is fabric or plasma. A few minutes standing in a theater lobby as any movie gets out should reveal the misconception in that thought. A set of attentive viewers can agree on the basic plot and arc of the story, but dig deeper than that and you will see how personal the dream of cinema can be.

I enjoy experimental, avant-garde, surrealist, or whatever, film because it plays with this sense of shared dream-making. Some films will send the viewer into their own trip, others will somehow create a consensual sense out of meaningless elements. A Field in England, directed by Ben Wheatley, works at both edges of that polarity.

If I had to tell you what this film is about, it would go something like this. Whitehead (Reece Shearsmith), a holy man in service to an alchemist, is sent to capture a rogue occultist during the English Civil War. Whitehead falls in with a group of deserters from both sides (Julian Barratt, Peter Ferdinando, Richard Glover), eventually convincing them to forego their quest for beer in order to help him find the occultist O’Neil (Michael Smiley). They find him or he finds them, the film is (intentionally) unclear on this point. O’ Neil captures them, with the help of his henchmen Cutler (Ryan Pope) and puts them all to work to find a treasure hidden somewhere in the fields. What they find is uncertain, but it unleashes a spiritual and formal storm which makes everything topsy-turvey.

There are long stretches where the characters do little more than talk and walk. This would be annoying if it weren’t for the crafty dialogue and character work that is revealed in this banter. Furthermore, I believe most of the “hints” to the what is really going on in all of this can be found in the actual dialogue.

This is a strange little beast of a movie. Part existential new wave, part surrealist, part supernatural horror and part historical drama, it seems dead set on telling its story on its own terms. Of course, the further into the mushroom (yes, that kind) filled field our merry band gets, the harder it is to tell exactly what the story is. Visually speaking, we see people get shot, people get killed and the climax of it all is a several minute psychedelic tour-de-force which blends stroboscopic effects (flicker film), art film tableau, and multiple exposures. There is a Jodorowsky vibe to all of this, but the imagery is all drawn from the narrative of the film, not an external “object of desire”, so Bunuel’s narrative films are worth mentioning. The immediate experience of this is a bewildering spin of WTF that leaves the viewer groping for a thread of sense.

This is where it gets interesting and remarkable. As disorienting as the film is, it does communicate the story quite well. Well enough, that with the exception on one historical detail, I left the film understanding most of what Ben Wheatley explained in a bonus feature on the disc. In a sense, I “got it” without really knowing that I understood the film. A Field in England works on you like the mushrooms in the strange field. Disoriented, transmogrified, and beyond sense; it communicates like a soft hallucination.