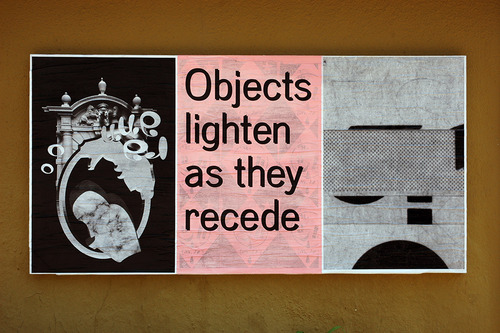 Graphic designer and design blogger Erik Brandt‘s work has been celebrated around the world. A design professor at the Minneapolis College of Art & Design and a member of the prestigious AGI (Alliance Graphique Internationale), his work has been featured in publications from Maurizio Cattelan’s Charley (Greece) and CRACK Magazine (UK) to designboom (US) and IDPURE (Switzerland), and his client work has been just as diverse, including, but not limited to, work for artists, videographers, and festivals. Given the international nature of his design practice (and residences: he’s lived in Malawi, Cameroon, Japan, Germany, and Egypt, to name a few), his latest project stands out for an opposite characteristic: its intensely local nature. He’s curating an ongoing poster show in his back alley in Minneapolis’ Powderhorn Park neighborhood. But in typical Brandt fashion, Ficciones Typografika offers a global lens: He’s invited artists from around the world to contribute work to the 24″ x 36″ space on the side of his garage. A neighbor and friend, he agreed to share some of the thinking behind the project. 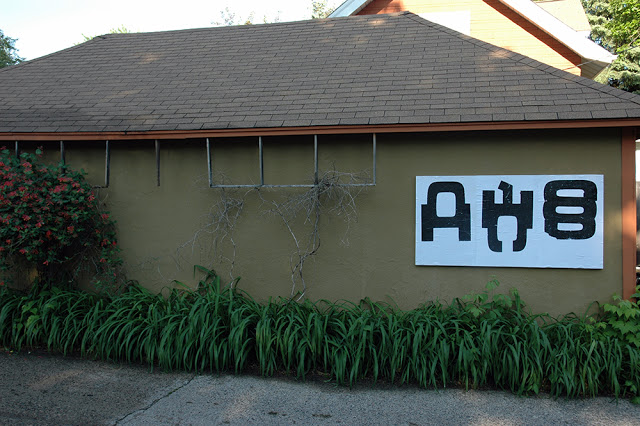 The audience for artwork on the side of a garage in South Minneapolis is limited. What prompted you to do this, and do you also consider the online life of the project in addition to that in-person audience of neighborhood visitors?

This may sound funny, but I really believe in the intelligence and imagination of people. The poster was made for people, to be viewed at a human scale, intimately and also from a distance. It’s a medium entirely devoted to life as a human, however distant that concept has become in our world. I used to do much more of this type of public projection in grad school, and this specific idea has been circulating in my head for some time, but it found momentum only recently. I had been invited to take part in round four of a similar project in Manchester, UK, called No Fly Posters. The idea there was to use abandoned buildings as a ground for posters devoted to that theme — the founder, Jon Bland, started it as a response to a property owner’s rejection of some early fun with the space, then started inviting designers to create work that poked fun at his admonition, “No Fly Posters.” I just decided that I wanted a medium that I could exploit at will and as often as I wanted, but also knew immediately that I would want to invite artists, poets, and designers from all over the world to join in.

The online life of the project both documents and extends the project’s reach, and it is especially satisfying to share images of wrinkled posters as opposed to digital versions. Once I have enough submissions, which will be sooner than later, thankfully, I’m also planning on printing a newspaper version of the posters at scale. I’m really looking forward to that; that medium will preserve the transparency, and each poster will interact with each other in a new way. 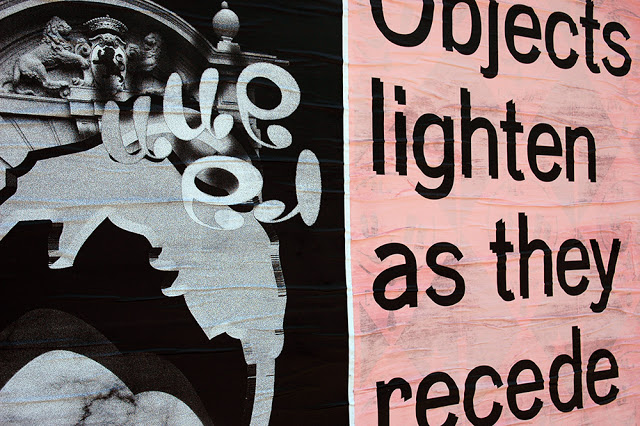 The site for the works and the ephemeral nature of the medium suggest an affinity for street art or graffiti, but the subject matter and style aren’t typical of those movements: abstract posters, experimental design. Do you make a connection to such street-based art? Or is there another medium you’re referencing?

I’ve been surprised by the conversations this has started with both neighbors and people stopping by. Most seem to feel it is art of some kind, and that is just fine. I can completely relate to street artists and hope this might be a way-station for that kind of activity. It’s also a defense-mechanism of sorts: my garage has been tagged a few times, so if it happens again, it will only complement the work on display at the time. 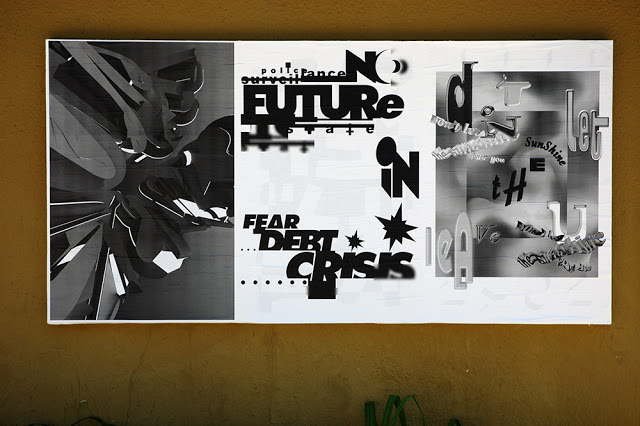 But, yes, I really want to advocate for experimental design and non-specific explorations. A highly-regarded friend of mine recently asked why she should engage with the project. I said that if it felt like design for design’s sake, so be it! The Be-Bop artists literally turned their backs on the audience, playing only for themselves, discovering new directions. I’d like to think this offers a similar potential, and I don’t mean that to sound arrogant or pretentious. The irony is that it is public, after all, however limited. Indeed, the Internet life of the project will surely reach more eyes. I imagine it both as a place for experiment and projection, and I haven’t defined content for anyone I’ve invited.

Tell me about the title. Of course, Typografika is the name of your studio, and “ficciones” is Spanish, hearkening Borges’ famed anthology?

I’ve been using that term for many years with regard to both my own work as well as some advanced design seminars I’ve taught both here and abroad. It is entirely inspired by Borges, though “typografika” was actually a term to describe Czech typographic unions some time ago. My early studio name was ¡ü16.øäk!, I stated using Typografika around 2000 because it seemed simpler, though I still like the conglomerate nature of the early moniker. It references the languages I grew up speaking, and their identities. 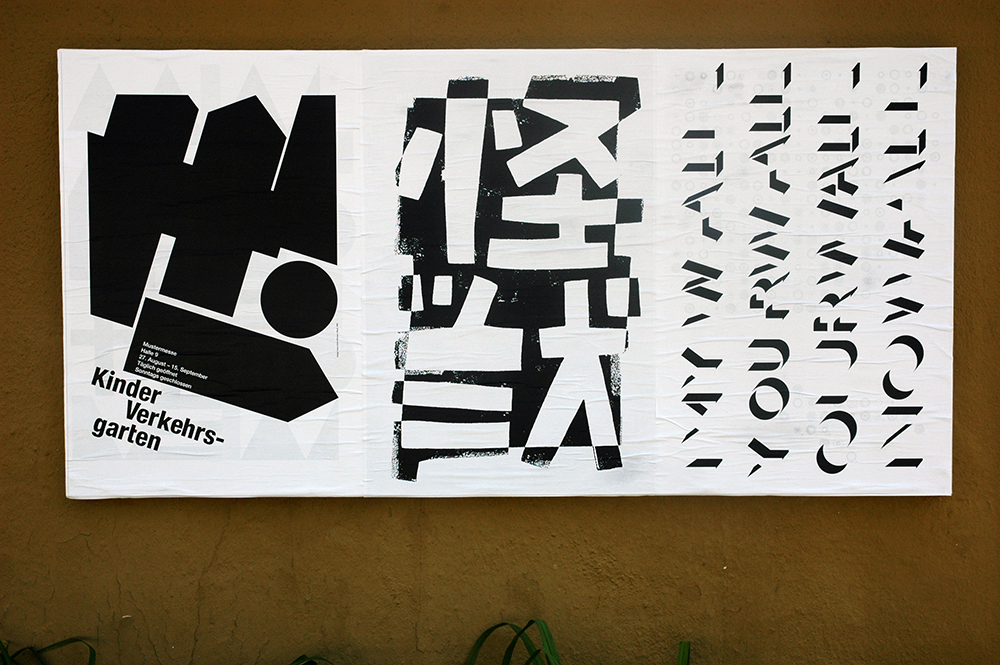 You’re featuring international designers in a hyperlocal setting. In that way, the project seems like a gift to Powderhorn, from you and from the contributing designers.

I’m glad it comes across that way, it really is a hope of mine that people will enjoy it. So much of our activities are online and revolve around “hearts” and “likes.” These get to be rained on and seen by chance, or on purpose. It might be hard to get them up in winter, but I am going to experiment with some heated wheat paste then.

To what degree are the works site specific? I see one, Götz Gramlich’s “My wall, your wall, our wall, no wall,” which seems to be. Will there be others?

It’s entirely up to the individual. I have encouraged people to work with their own native languages, so I hope Götz will submit a new one in German. I really want to share the vibrancy of language in all of it’s forms. There will be submissions from Thailand, Iran, China, and beyond, I hope. 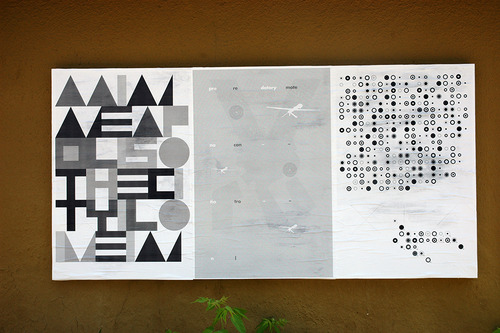 Your predator drone “remote control” piece definitely has some currency as more artists take on the topic in their work. Is there a political message in the siting of the piece — your alley — in the way that James Bridle’s large-scale Drone Shadows brings drones down from the sky and reminds what few of us can see close up: surveillance or weapons-enabled aircrafts remote controlled by unseen government actors?

That poster was reworked from an earlier version I submitted to Mut zur Wut (Courage to Anger), the Heidelberg, Germany poster competition founded by my friend Götz. I like this version better, it’s more direct in a sense, and the typographic experiment is subtle yet pointed. His competition invites people to take on subjects that “anger” them, and this one is related to the inaugural event, where I used type found in Minneapolis to determine the message that tried to capture early disillusionment with the promise of Obama. The recent revelations of NSA surveillance of citizens worldwide has only compacted this feeling. We came so far, but at what cost? It is deeply disturbing to me. Travis Stearns and I share a similar viewpoint, and his recent submission echoes that same sense of foreboding. 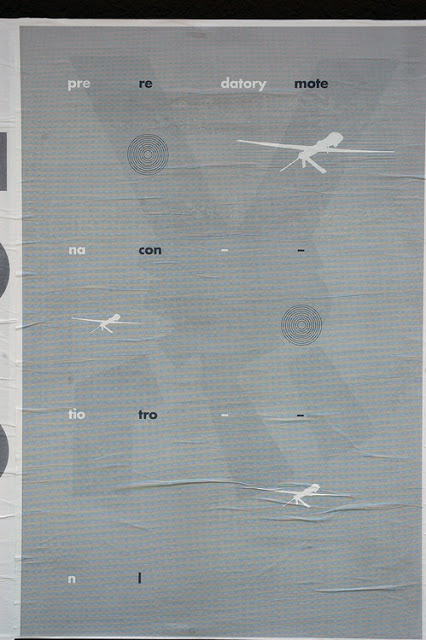 I love the DIY nature of this. You’re an accomplished designer/artist with lots of client work and design accolades. What does this kind of project do for your process? Does it fill a need or scratch an itch that client work might not?

Well, thank you for that compliment, sincerely. It fills a need to communicate and experiment, and it’s especially satisfying to include others, both students and professionals, artists, poets, and designers. It’s so simple, and so joyful. Armin Hoffman remarked once that posters expose the soul of a city. I am hoping to share the souls of the world. 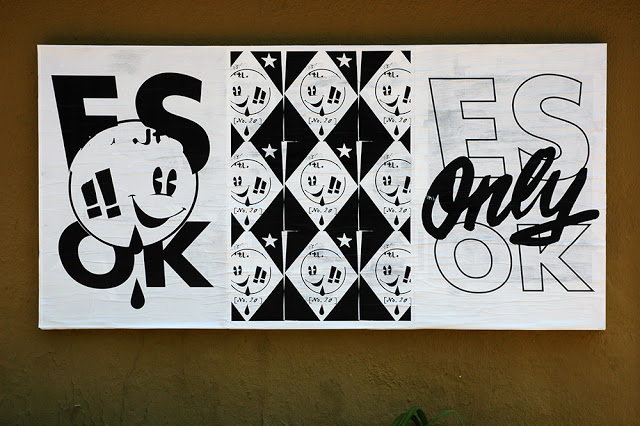