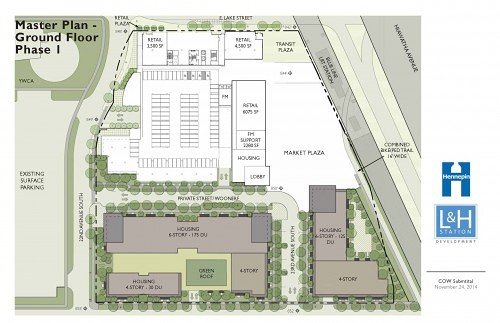 In early December, Hennepin County and L&H Station (“the development team”) submitted plans for the development of L&H Station at 2225 East Lake Street, at the southwest quadrant of Lake Street and Hiawatha, a six-acre site immediately adjacent to the Lake Street station of the Blue Line. Below is the ground level plan submitted. In the context of the years of planning that led up to this submittal, and posts of my own, the following are a few questions I think the Planning Commission should ask.

Can meaningful improvements be made to activate the 22nd Avenue frontage? (see below for 22nd Avenue elevation) Perhaps the real question is why are 90 enclosed surface parking stalls even needed, given there are 350 underground? The CPED staff report cites the 22nd Avenue frontage as problematic, as it is too inactive and the main problem is the garage door that faces the neighboring YWCA. The development team’s answer to the neighborhood’s urban principle that parking be underground or otherwise hidden from view was to simply enclose the planned surface parking and skin it with the bike storage area. They added that the bike storage could maybe become a bike shop, which would be nice, but where is the letter of intent from that business? The development team also extended the windows farther south from the corner at Lake Street with the notion that the corner retail space be occupied by a restaurant with an active patio. That’s all well and good but what if a restaurant never materializes?

The southern third of the 22nd Avenue frontage is the planned apartment building whose lobby will face 22nd. The problem there is the plan shows a wall separating the sidewalk from the building (see below), which reduces a building’s ability to activate the public realm. So, whereas the development team argues that as much as two-thirds of the 22nd Avenue frontage could be active, in reality if no restaurant or bike shop moves in the active frontage will be closer to zero. Either way, the big garage door remains Speaking of the hope for retail tenants, has the planned retail space, its design, ingress and egress and relationship to parking been vetted by retail developers and brokers?

Is the county really willing to spend such a large proportion of it’s the project budget on parking? Putting nearly 350 stalls underground at a ballpark figure of $25,000 per stall is $8.75 million, or 17% of the $52.5 million budget. Even if all those stalls were needed, putting those stalls in a parking ramp at $15,000 each could save $3.5 million that could go to fund the farmers market plaza or other public amenities. On a related note, is all this parking needed, as the CPED staff report asks?

What is the plan for the market plaza and will a future owner materialize without additional public expenditure? Among the many things the Corcoran neighborhood wants is a permanent home for the farmers market and street-facing retail. While it is true that a location is being set aside in the plan for the farmers market, actual improvements to that location aren’t yet guaranteed. Aside from having to operate from a new location consisting of asphalt, the only guarantee is that they will have to move at least twice before this is resolved. Moreover, there certainly isn’t money identified as of yet to improve the plaza, much less provide management and programming for the plaza the other six days of the week when the farmers market isn’t operating. The development team themselves acknowledge this as an issue, and their hope is that a well-funded entity comes along to purchase the plaza from the county.

Is it really best for the neighborhood and farmers market to have the market plaza so isolated from the rest of the site? As perverse as this sounds, the current situation of the farmers market, open and visible from the YWCA, Lake Street and the Blue Line, albeit on an asphalt lot, is better than some future scenarios.

Is the Corcoran neighborhood really happy with the current plan? Although CNO has supported past iterations of the plan for Lake and Hiawatha, to my knowledge they have not officially voted to endorse this particular design. There is a difference between settling and striving for something better.

Just to be clear, the private green roof (shown below) located above the enclosed surface parking lot will be built as part of phase 1, but there is not yet a plan nor funding to build the public plaza that will be the home of the farmers market? Is there a better way? While the Planning Commission’s job is to react to the submitted plan, even a little research in to past iterations of this project show prior plans had a much better public realm that was more porous and pedestrian-friendly (see 2010 plan below). So many of the issues that arise in the staff report stem from the fundamental layout of the site plan, which is primarily driven by the county’s pressing need to get their service center completed as soon as possible and the insistence that guests can arrive by car and directly enter the building without needing to set foot outside. What this does is puts indoor parking at the center of the site (with private green space above), which creates a ripple effect throughout the site, diminishing pedestrian connections, creating auto-dominated frontages and ultimately isolating what should be the centerpiece of the site, the market plaza. We can do better. A group of concerned urban professionals including Bob Close, Pete Keely, Michael Lander and I came up with an alternative ground level plan (see below) that accommodates the county’s needs but also accomplishes the following: It wasn’t so much that we wanted “our plan” to be used (we don’t even want credit for it), but rather that it serve as an example for how great this TOD could be. We believe that if you put 10 developers and urban designers in a room for a day (like a ULI Advisory Panel, for example), you could come up with a plan that meets the requirements of Hennepin County but also better results for everyone, particularly the public realm. A win-win.

Alas, Hennepin County is, after all, the key to this project, with a $52 million investment that frees up the site to be developed over time. Purely from the perspective of delivery of services for Hennepin County, this project meets their needs, and with the added benefit that clients can arrive by transit if need be. It is really exciting that Hennepin County is bringing an anchor tenant to the site, but the fundamental problem is they have designed a suburban-style facility that allows visitors to never set foot in public, urban space. That is fine in Brooklyn Center, for example, but not in the city, much less next to a train station. We should hold Hennepin County to a higher standard when it comes to TOD.

The old expression about not letting the pursuit of perfection get in the way of good results would apply here if the results were good, but the problem is they are so…disappointing, and as I already noted are a step in the wrong direction from earlier plans. We cannot accept mediocrity in the name of urgency. And the idea that this is the only way to accommodate Hennepin County’s needs is simply untrue. There can be a win-win, and for now it’s in the hands of the Planning Commission. We’ll see if their back and forth with the development team results in meaningful improvements to the plan, because we can do better, but time is running out.