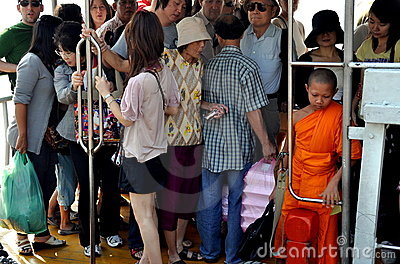 She was a young farang — or Westerner — and I could see that she was failing to make herself understood by the  security guard at Bangkok’s Thammasat University where I am newly installed as a research fellow. With an unruffled look she held up a map of the city and kept pointing at it and talking to the uncomprehending guard as if  sheer persistence might break down the language barrier. For his part, the guard smiled and bowed his head in a half-wai — the Thai gesture of respect. I got close enough to hear that she was speaking in  accented English and decided to “make merit,” as the devoutly Buddhist Thais say.

Her name was Sophie and she was from Munich. Unlike most of the farang I’ve encountered here, she seemed very centered and not at all nonplussed or frazzled by the heat or crowds or her confusion over directions. She told me she’d been in Bangkok for four nights, alone, staying in the Muang Nonthaburi neighborhood about six miles upriver from the university. She was going to be in the city another week, then traveling to Chiang Mai province where, in mid-June, she planned to meet friends and travel around Thailand for another month. Right now, though, she was trying to find the public landing where she could catch a ferry to her lodgings.

No problem, I said, like the expert on Bangkok I was after being in Thailand for a grand total of two weeks. Follow me.

The landing was only a hundred yards away as the crow flies, but the route takes you out past the gates of the university and then, via a hard right, through a warren of portable stalls where vendors hawk food and costume jewelry and the small bouquets that Thais offer the Buddha at temples and on into an enclosed, dogleg passageway of shops and vending machines and, of course, more stalls. I brought her to the ticket window, then got my own ticket at the adjoining window. “Safe journey,” I called as she began to make her way up the gangway to the floating landing where her ferry was already waiting.

“Thank you,” she replied. “Auf wiedersehen.”

I watched as she boarded, making sure that she was on her way without incident, then climbed on my own ferry. Once we pushed off, it  took less than a minute before I realized that I’d gotten on the wrong boat. Instead of taking me directly across the Chao Phraya River to the Thonburi landing and a quarter-mile hike to my apartment, we were headed toward an upstream landing and a two-mile walk down streets where I’d never ventured before.

The blind leading the blind, I guess. I hope she made it back to Nonthaburi. Even if she didn’t, I suspect she would be okay. She was that kind of young person

Auf wiedersehen, Sophie. Sawasdee. It was nice getting to know you, however briefly.