A flock of wild turkeys walks down Johnson Street daily in Northeast Minneapolis and hang out in trees at a neighborhood church. Store owners and residents feed them daily. Drivers stop and wait while they cross the street. One merchant even sells t-shirts that read, “I heart Johnson Street turkeys.”

But for a mother who attended a panel discussion on Urban Wildlife held at the Eastside Food Coop on March 8, the turkeys have become something to fear: she had to beat them off when they attacked her toddler. A postal worker in the neighborhood also had a turkey jump on her back while she was trying to deliver mail.

According to Bryan Lueth, life is good in the city for many wild animals and rivers running through the metro area make ideal avenues for animals to wander. Wildlife including turkeys, opossum, fox, and coyote are spotted in all parts of the metro area on a daily basis. Cities are safe for predators like coyotes because of the presence of prey species in the area.

Lueth said that animals such as rabbits, squirrels, white-tailed deer, turkeys, coyotes, and fox are “habitat generalists” and can adapt easily to living in close proximity to people. The cities also have become an ideal habitat for Canadian geese, each one of which leaves behind 2-4 pounds of goose droppings a day.

The ranges of animals such as the wild turkey, coyote and opossum also have expanded to include the Twin Cities metro area in the last 15-20 years, as residential and industrial development has put pressure on habitat.

Today the DNR receives more nuisance calls about wild turkeys and coyotes. A coyote may “shadow” a dog and its owner on a walk because the coyote perceives the dog as a rival in its territory. Coyotes may prey on small dogs out alone or pet cats roaming free all night.

Residents who find injured wildlife can take them to DNR-licensed rehabilitators such as the Wildlife Rehabilitation Center located in Roseville. The Wildlife Rehabilitation center was founded in 1979 and originally served as a student club of the Veterinarian College at the University of Minnesota. Its mission is to provide medical care and rehabilitation for all injured, sick and orphaned wildlife. Their first year they treated only 46 animals. Today they are the busiest wildlife hospital in the country treating 8600 animals last year. They are supported entirely by public donations, which come from 42 states. According to Phil Jenni, Executive Director, the most common animals they treat are squirrels and rabbits.

“We get to make parents out to be super heroes when they bring in injured animals with their kids. We bail a lot of parents out,” he said, noting that they are building compassion for wildlife.

After rehabilitation, the animals are released back to the wild to an area where they will most likely survive. The center works with the Park Service to find the most appropriate spot but generally it is in the same area where they were found.

Another mission of the center is student teaching. Fifty to sixty interns a year work at the center. Jenni said wildlife medicine is growing in popularity.

Although people are trying to be helpful they often become animal nappers. Young animals are brought to the center because people think their mothers have abandoned them.

(Parents with) “Kids will come in with a shoebox full of bunnies,” he said. But the bunnies are often well fed and the mother was most likely nearby when the parents took them in.

Lueth once received a call by someone who had his dog stomped on by an angry doe when the dog got too close to her fawn. 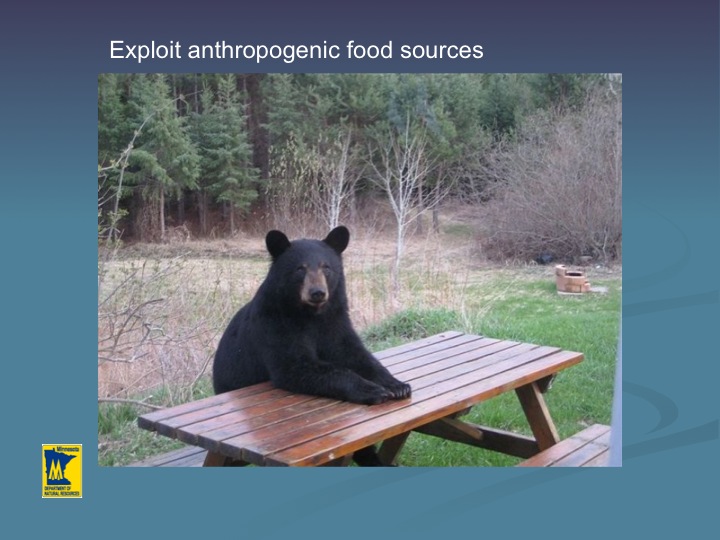 Most problems with wildlife can be traced to intentionally or inadvertently providing food.

Feeding the wild animals causes more harm than good. Contrary to what many think, feeding ducks bread is bad for them.

“Putting bread out in water for geese will actually kill them,” Jenni said.

Feeding wildlife also makes them problematic. Wild animals get lazy and will go after the easy meal. Turkeys who become used to being fed will become aggressive. They will try to be the “ top turkey” and will come after small children.

Thor Nelson said that water balloons and super soakers are good deterrents for an aggressive turkey.

Relocating wild animals that are doing damage is a bad idea they have difficulty surviving in a new area, and because they could also spread disease and become a problem in someone else’s neighborhood.

City ordinances govern what methods of disposal are allowed and for which kind of animals that are causing damage.

Lueth said, “The DNR should be involved if it is a species that a property owner is not allowed to take without a permit. Even then, local ordinances that prohibit the use of weapons and traps still apply. We rely on individual property owners or local governments to handle most of these problems, if they are severe enough. We try our best to manage wildlife populations, not individuals.”

The DNR is interested if residents find great numbers (six or more) of a species dead of unknown causes so they can determine if a disease or poisoning is occurring. They are also interested in rare or unusual species sightings. Sending a photo of the animal or its track to them can be very helpful when trying to identify a particular animal.

“People often send me pictures of what they claim to be cougars, but they are really house cats. Not impossible, Lueth added, “ but sightings are rarely substantiated, and if they are, the animal is here today and gone tomorrow.”

The consensus from all three speakers comes down to a few simple words of advice: If you love wild animals leave them alone. “Enjoy the mystery of them being wild,” Jenni said.