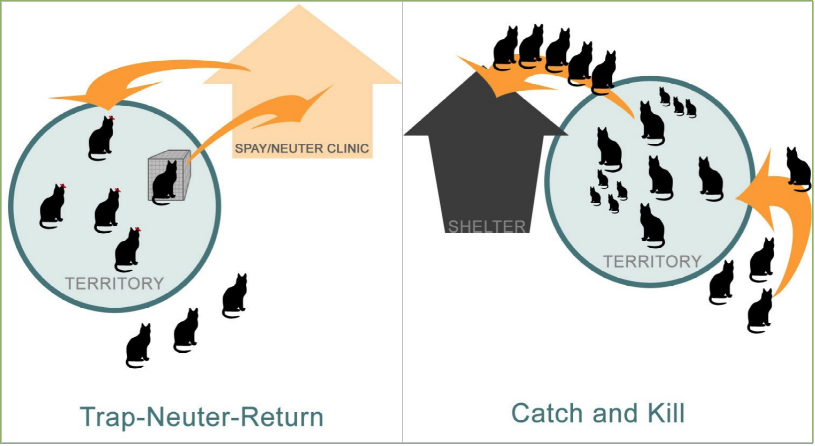 What started as Don Waalen-Radzevicius spotting a few feral cats living under his front deck has now turned into caretaking of an entire colony of around 16 felines.

When Northeast Minneapolis resident Waalen-Radzevicius heard that the feral cats were going to most likely be trapped and destroyed, he decided to contact a local organization called Pet Project Rescue. The people at the organization helped him to figure out how to trap the feral cats and bring them in to be spayed or neutered. Pet Project Rescue is a local, for purpose organization that rescues homeless or abandoned dogs and cats and places them in volunteer foster homes until the animal is adopted. In this first of a series, we look at parts of the urban animal puzzle.

Pet Project Rescue referred Waalen- Radzevicius to Minnesota Spay Neuter Assistance Program (MN SNAP), a non-profit that gives high-quality, affordable, and accessible spay and neuter services for animals to those in need. He then had to go through the process of filling out paperwork in order to become the caretaker of his colony of cats. You are agreeing to feed and take care of the feral cat colony until it is gone when you become the colony caretaker.

After Waalen-Radzevicius became the caretaker, he learned that there was a colony of over one hundred cats around one mile away from his house and another colony of about 40 cats within a four block radius. They have three traps from Pet Project Rescue that they lend out to neighbors if they need help trapping feral cats. One of his neighbors is the caretaker of one of the other colonies so they have shared some of the feeding responsibilities of feeding. Pet Project Rescue also helps by giving food to colony caretakers when they receive food donations.

Any kittens born in the colony that are at least 6 weeks old are taken and put in a foster home to see if they are tame enough to be adopted. If the kittens are 12-13 weeks old, the feral instinct generally is so dominant that they are no longer tameable, and the foster family has to bring them back so they can be returned to their colony.

“The big thing is that these animals are being treated humanely and trying to keep them as little of a public nuisance as possible,” Waalen-Radzevicius said.

Dr. Kim Culbertson worked in the animal shelter business for about 10 years when she realized that there wasn’t an organization like MN SNAP in Minnesota, so she started it. A Doctor of Veterinary Medicine, she is the MN SNAP Founder and Blue Sky Veterinary Services Lead. Since they opened in 2010, Dr. Culbertson and her staff have spayed or neutered over 50,000 animals with 15% of those being feral cats specifically. At the previous shelter where she worked, Dr. Culbertson said that she didn’t remember any feral cats leaving alive. However, she learned the Trap-Neuter-Return concept from another animal shelter she worked at.

In the Trap-Neuter-Release method, the colony caretaker will trap the feral cat and bring it in to be spayed or neutered. Finally, it is released back into the colony. “Spay and Neuter is the first and foremost method of management,” Dr. Culbertson explained. “It has been shown time and time again that removing cats isn’t an effective method because then more cats come in.” If the feral cats are spayed and neutered and then released back into the colony the numbers generally remain the same and eventually the colony will end with the existing cats.

“If more of the neighbors could be educated about the benefit of TNR they would be more accepting of living with the cats and managing the population humanely,” Dr. Culbertson said.

People in low income neighborhoods are the least likely to have their pets sterilized and the most likely to relinquish their pet to a shelter. Because of this, MN SNAP tries to make it possible for everyone to have a chance to have their pets spayed or neutered. They screen clients by requiring that they receive public assistance or have a total annual income of $40,000 or less. They don’t require feral cat caretakers to meet certain standards, because they want to prevent the feral cat colonies from increasing. Dr. Culbertson says that they spay or neuter at least one feral cat almost every day.

MN SNAP has clinics each week that go to different locations all over the state. They are now traveling all the way to Roseau, MN, the furthest they’ve ever gone. At these clinics, the residents in the different locations are able to bring animals in to be spayed or neutered. For feral cats, they do an initial exam and shots, notch off the corner of the ear so you can visually tell if they’ve been spayed or neutered, and microchip them to track where they end up. If they find a cat outside of its colony, they can bring it back using the microchip.

MN SNAP purchased a building in North Minneapolis on North Washington Avenue at the end of 2012. The building is only a shell right now and will need a complete remodel. They are in the midst of a capital campaign to raise funds for the remodel. They are hoping to raise the funds so they can open sometime in the next year.

Minneapolis Animal Care and Control (MACC) works with residents to create safe and healthy communities for people and animals. On September 27 from 11 a.m.-2 p.m., the MACC is sponsoring their annual community celebration called “I’m in the Doghouse” to raise money for the animal shelter. In their words, they will be “’kenneling’ and ‘adopting’ local elected officials, celebrities and average citizens.” Mayor Betsy Hodges, City Council Members and McGruff the Safety Dog will be making special appearances.

City Council Member Jacob Frey is going to participate in the “I’m in the Doghouse” event. A while ago he was able to tour the MACC facilities. “I was amazed at the amount of care and compassion exhibited by MACC staff,” Frey said. “On an annual basis MACC takes in over 4,000 animals, is visited by more than 6,000 customers, and partners with 46 animal rescue groups to send more than 90 percent of adoptable pets home. These numbers illustrate our ongoing success in placing as many animals as possible with loving homes.”

In addition to the kenneling of humans at the event, MACC staff and volunteers will be giving tours of the shelter. There will be educational booths, face-painting, a dog agility demonstration, food and more. There will be a dog costume contest at 1 p.m.

Stay tuned for part two of this story. It will give an update on how the “I’m in the Doghouse” event went, will give more specifics about the new city initiatives to help create a healthy relationship between people and animals, and will explain what is new at Minneapolis Animal Care and Control.