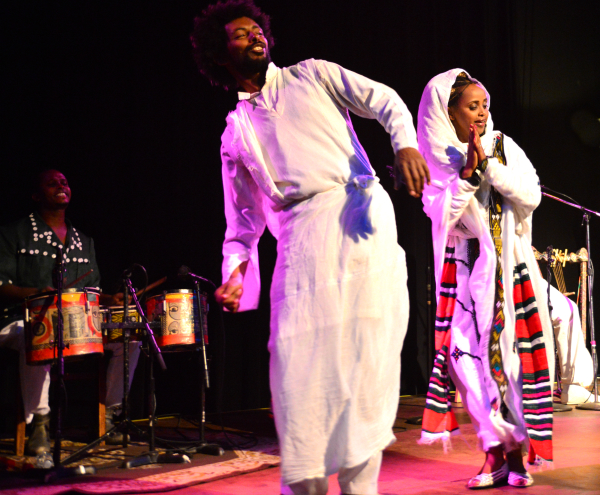 Fendika put on a great show at the Cedar Cultural Club on Wednesday, July 10, getting the large crowd dancing and jumping and spinning all over the place. Before I went to the show I had never seen Fendika except for a video off the net. But I will plan to go anytime they come to the Twin Cities because I know it will be a great show that will make me feel like I have seen a band.

Last night’s show began with a set from the three instruments which were unique;  four drums which looked like they might be handmade (played by Misale Legesse), a masengo, which is a violin-style instrument (played by Endris Hassen who played the single horsehair string with his fingers), and Seleshe Damessae made music with the krar,  best described as a type of six-stringed lyre.  The music they made was quite wondrous, and that would have been enough for a fine concert. But that is not their style. Soon out came Nardos Tesfaw, the singer who upped the level a notch with her fine clear voice and occasional trilling cry.

But the energy level at the Cedar went nuclear when Zenash Tsegaye and Melaku Belay came out and engaged the people with their kinetic-energy dancing that set everyone in motion, whether age three or in their 80s. For well over a solid hour Fendika never stopped moving and shaking. Sometimes they twirled and sometimes they jumped off the stage and took members of the audience by hand and danced with them. Even the smallest of the participants from the crowd were entranced by the group and spent a happy time grooving away.

The band name, Fendika, is drawn from the club Fendika Azmari Bet, which translates as House of Music. It is located in Addis Ababa, the capitol of Ethiopia. Their music bridges the gap between the traditional music of Ethiopia and modern life, culminating in what can best be described as a big happy sound. The sound that comes forth is  the embodiment of the hit song by Bobby McFerrin, “Don’t Worry, Be Happy.”

As the show finally came to an end, Zenash and Melaku again jumped from the stage into the crowd and gathered them in a big circle and asked everyone to kneel down. Putting their hands on the floor, they began to raise and lower their arms in a hypnotizing swaying motion, which reminded me of a Voodoo ceremony I witnessed back in Haiti in the 1980s. This was not a religious act, but a joyous movement of our free spirits as this rhythmic dance drew the audience into a mass dance that rose from the floor and swirled together much like a whirlpool until exhaustion.

Then the show was over and people filed out of the Cedar happy to have been there to participate with Fendika in a rare collective-dance concert.