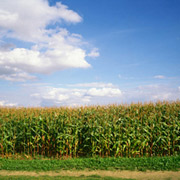 Minnesotans wondering how this summer’s heat and spreading drought may affect them might peek in at Lucy and Cliff Larson Jr. and their ventures that cover nearly every cog in the food chain.

What they know, and most everyone else directly involved in agriculture knows, is that Minnesota may have some farmers scoring windfall profits before the year is out. Others will be seriously harmed, and markets for grains, oilseeds and livestock may be disrupted for up to three years in the future and that can seriously hurt the Minnesota economy.

Cliff Larson is a corn and soybean farmer. He also has a grain marketing and processing business, Midwest Protein at Grove City, and owns an equity stake in Bushmills Ethanol at Atwater. Lucy, meanwhile, owns SoySoft Inc., an Edina consumer products manufacturing company that makes lotions from processed soy ingredients at a plant in Minneapolis.

Oh, and they eat. That makes them end-user, or consumers, too.

Much media attention has focused on the drought conditions that now cover more than half of the continental U.S. This has people questioning when and if consumer food prices will rise.

Commodity prices for corn, soybeans and wheat are soaring. This will add to variable costs and squeeze profits for food and industrial processors like SoySoft and Bushmills. The scarcity of hay crops and higher cost feeds already have stressed farmers selling dairy herds in southern Wisconsin and parts of the Eastern Corn Belt, and beef cattle raisers are doing the same in scorched areas of the Southern Plains.

“About four more days of 100 degree temperatures and little or no rain and we will be in big trouble across most of Minnesota,” said Cliff Larson, who farms land in Kandiyohi and Meeker counties west of the Twin Cities. Most of his fields still look good, he said, but he lost some soybeans in low areas after heavy rains fell on Father’s Day, and now nearby soybeans are drying up on adjacent land.

Across large areas of the nation, the severity of the drought is being compared with similar spells in the 1950s and 1930s. Here, Larson said, it is more like drought experiences in 1983 and 1988. “But that can change real fast,” he said.

Minnesota Agriculture Commissioner Dave Frederickson isn’t waiting for future weather to reveal itself. He’s pulling together key personnel in the Agriculture Department this week for a drought watch.

“We need to be prepared and not just react after the fact,” he said.

Frederickson said he’s especially concerned for livestock producers who are losing their feed supplies. “I checked the prices this morning (Monday) at the Murdock elevator and it would be tough buying feed for cattle at those prices,” he said.

Livestock prices may actually dip if more farmers across the nation choose to liquidate herds rather than encounter the higher costs for feeding them. This can also disrupt livestock cycles that can run from about 18 months for pigs to nearly three years for cattle.

Futures prices for corn for delivery after the harvest were pushing $8 a bushel, soybean futures had climbed above $16 per bushel, and the Minneapolis contract for hard red spring wheat gained more than 33 cents in Monday trading to close above $9.78 per bushel. Winter wheat crops traded in Chicago and Kansas City had similar gains to close above $8.84 per bushel even though most of those crops are harvested and the spring wheat harvest is underway.

Put another way, consumers might actually see lower meat prices at the store before summer is out, but will pay more down the road. Consumer prices always trail commodity prices, both up and down, as pricing works through the system. For grain-based foods, however, weather-induced changes in commodity prices are not as profound as with meat, milk and egg production; the food companies buy grain by the ton and sell it by the ounce. Other players in the food chain, such as processors and transportation, take greater portions of the food dollar.

This can hurt markets that are already under stress if people do more cautious purchasing, said Lucy Larson. The phones keep “ringing off the hook,” she said, but it isn’t from shopkeepers wanting to order “a Minnesota product made from Minnesota soybeans.”

Instead, the callers are printers wanting to sell her labels, or packaging companies with new products, or other vendors. The independent retailers that offer products like SoySoft are declining, she said.

Commissioner Frederickson said it is too early to guess how the drought will play out in Minnesota. More broadly, however, he said the severity of the drought should remind members of Congress that there is still a need for “safety net” protections for farm income in the farm bill they are writing.

It should also remind lawmakers that consumers – and especially the poor – also need “safety nets” as well against volatile prices. That comes from food assistance and nutrition programs that are under threat in both Senate and House bills, he said.