From street cars and rapid buses to expanding rural and exurban mobility, many Minnesota communities have ambitious plans for transit. In the past, federal funding has been a key tool to finance local transit needs and expansions.

At the same time, Minnesota’s state share for new capital projects has been going down, says Rep. Frank Hornstein, House Transportation Finance Committee chair, toward a share of only about 10 percent of new projects’ cost. Local authorities are often being asked to shoulder as much as 30 percent of the cost, with the hope that federal funding will make up a big part of the remainder.

That hope is getting more likely to meet with disappointment, says Dibble, given that the federal share of capital costs on new transit projects has been declining too. The 80 percent federal share which used to be commonplace is receding down to 50 percent on many projects now, like the new Green Line light rail, and Dibble believes that downward trend is likely to continue: “we don’t know” quite how low, but he expects 25 to 30 percent is certainly possible. It’s more difficult now to predict future federal funding levels, too, since this bitterly divided Congress has trouble staying in operation at all, much less passing short two-year funding authorizations for the Department of Transportation.

Longer six-year funding authorizations used to be standard, a timeframe which gave communities a better sense of what Washington was going to fund and allowed them to make more confident and secure transit plans. Now things are more volatile, and a conservative-controlled House is distinctly unlikely to support the expanded DOT funding which could grow the pie available to new transit. 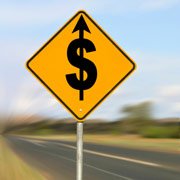 Minneapolis mayor Rybak’s policy director, Peter Wagenius, recently said in light of all this, federal DOT officials have themselves encouraged Minneapolis and other cities to focus on pursuing non-federal funding sources for new transit. Dibble expects that “we’re just going to have to get about the business of doing for ourselves.”

The rapidly rising numbers of applications for federal TIGER grants for capital improvements (to take one major example), especially from smaller communities outside major metro areas, “speaks to the incredible unmet needs that’s [sic] out there,” as Hornstein put it. With an uncertain federal role in the future of Minnesota transit, Hornstein says there’s a “growing sense that we need to step up regionally to fund these projects,” but he looks to cities and counties as “the key players” to do it.

Local leadership absolutely has to be there, but Minnesotans shouldn’t have to be limited just to that, not when improvements to transit are a vital interest of how this entire state supports its people and fuels its economy. The Legislature didn’t step up with this year’s transportation financing, but they’re going to have step up to do Minnesota’s part for making Minnesota mobile and connected. That means robust state support for transit, side by side with local involvement.