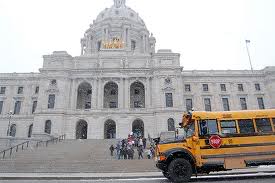 To say the least.

Already ranked near the bottom among states in per capita spending by the federal government, Minnesota dipped even further in 2010, according to the U.S. Census Bureau.

The federal government spent $44.3 billion in Minnesota in 2010, a negligible increase over the previous year’s total. The 2010 spending total amounts to $8,366 per person, dropping the state from 47th in per capita spending in 2009 to 49th. Only Nevada was lower, with the government spending $7,321 per person there.

(If you’re really interested, presumably you can get to the report noted in the article, by starting here.)

A spokesperson was pretty diplomatic:

Factors influencing the flow of federal funds include demographics, economic well-being, industry, federal facilities and emergencies, such as natural disasters. So a state’s low per capita federal spending could be a sign that a state is doing well.

“The federal government spends less per capita in Minnesota than most other states for several reasons,” said John Pollard, a spokesman for Minnesota Management and Budget. “We do not have as many senior citizens as several other states, we receive less Medicare and Medicaid reimbursement than other states, we have a smaller number of federal employees than many other states, and the state does not have a high concentration of military personnel, military bases or military contractors.”

Overall, the real reason that Minnesota is in this position, is that it can be. While there are exceptions, for the most part, over the decades, it’s the red states that have needed the big federal inputs,to keep their economies from plummeting to developing-nation status, because of their failed conservative governance.

Until about 13 years ago, Minnesota was generally governed with the idea that tax receipts should be invested for the good of everyone, not funneled to the rich.  We can get back to that, too, without having suffered too much long-term damage, by taking back the legislature and defeating the planned “Destroy Minnesota” amendment, which would require 2/3 majorities to make the rich man pay up.

I, personally, don’t have a huge problem, with helping to bail out the kids in red states;  who knows what their schools and hospitals might look like, otherwise.  But, it’s long past time that more of the voters there pulled their heads out, and started to abandon the righty politicians that have kept their region the most benighted bastion of political and economic failure in the developed world.