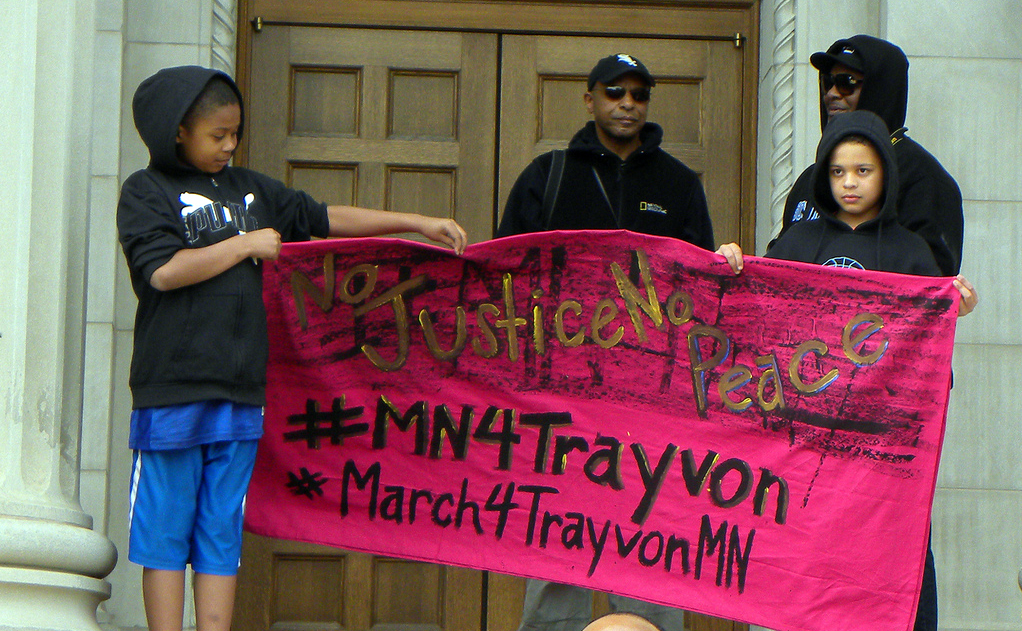 A rally at the University of Minnesota in March 2012. Photo by Fibonacci Blue (Creative Commons).

On Saturday night, July 14, 2013, the internet has exploded over the results of the George Zimmerman trial. Cries of shock, anger, and dismay resound on Facebook, on Twitter, around the blogosphere. There was a vigil already on Saturday, and there are more being planned.

I feel sick to my stomach. We live in a country where a man can shoot another man, a Black man, in the chest, and get off free. How can this be?

The laws are wrong, clearly. Florida’s Stand Your Ground law, like similar laws in other states, has been revealed in this case as in others to be an epic failure, to encourage vigilante justice and lawlessness. Let’s not forget that Zimmerman at first wasn’t even charged with a crime, and it was only after public pressure that the prosecution took up the case.

But it’s more than just bad laws that has caused such a tragic and outrageous conclusion. It’s the deep-seated racism that still persists as an ever-present scar on our country.

No one will ever call the cops on me because I’m walking through their neighborhood at night. It just simply won’t happen because of my skin color. I don’t get pulled over by the cops for no reason. There’s a whole list of things that I take for granted that I don’t need to worry about because I happen to be white.

In some ways, I find myself unsure of how to even express my emotions over how Zimmerman could have been found innocent. Who am I to say anything, when I clearly enjoy this privilege that protects me from the George Zimmermans of the world?

At the same time, how will we ever become an anti-racist society if it’s just one segment of the population that expresses outrage when something like this happens? It takes all of us—no matter the color of our skin—to say, you know, this is something we need to deal with.

It’s not going to happen at a rally, or on a blog, or because of a Facebook post. If we want to start chipping away at white privilege and racism, it’s going to have to start in schools. Unfortunately, I think that with some exceptions, schools still don’t have strong tools for teaching young people about these issues.