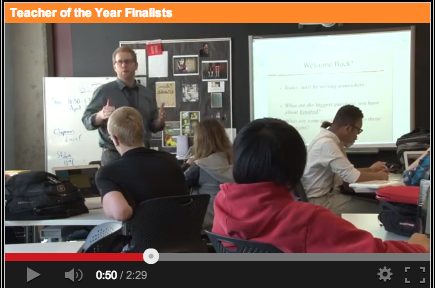 High teacher turnover. A climate of fear and silence. Children put in dangerous situations. A lack of oversight, governance, and responsibility. Extremely poor leadership and communication.

Frustration and a sense of helplessness are boiling over for some parents and teachers from the Fine Arts Interdisciplinary Resource School (FAIR School), who say they want principal Kevin Bennett fired in order to save the school.

The FAIR School, with campuses in Crystal and downtown Minneapolis, is part of the West Metro Education Program (WMEP) and educates approximately 1,000 students in grades K-12. FAIR has an arts focus and is part of the independent WMEP school district, intended to promote integration between suburban and urban students.

On principal Kevin Bennett’s LinkedIn page, his job as “President” of his consulting company “KB4Kids” is listed first, followed by his job as principal of both FAIR School campuses. In fact, his affiliation with outside businesses is one of the key reasons the teachers and parents are questioning Bennett’s ability to effectively lead the school.

According to several teachers who spoke with a reporter on condition of anonymity, Bennett has started a variety of businesses while at FAIR, including KB4Kids, a music production business, and a restaurant partnership. [TC Daily Planet generally does not use anonymous sources, but makes an exception when there appears to be a well-founded fear of serious retaliation for whistle-blowing.]

They also maintain that Bennett promotes his other businesses during the school day, and has his own publicist in FAIR staff member Anne Marie Arndt, who they say “follows Bennett around with a camera” during the school day. On Arndt’s LinkedIn page, she is listed as both a FAIR employee and as “Creative Director” of Bennett’s “KB4Kids” business.

Twin Cities attorney Gregg Corwin, who has been retained by a group of parents and teachers, says Bennett’s side businesses are indeed a key point of contention. Corwin says he has documentation, which has been presented to the WMEP school board, showing Bennett promoting one of his businesses while at a school-financed, out-of-state conference.

Corwin also said he is representing this group of parents and teachers because they fear retaliation, not only for themselves, but also for their children and students. He said parents and teachers who have spoken out publicly have been subjected to a variety of silencing tactics. For example, teachers have been reassigned to grade levels, classrooms, and positions that they are not prepared for.

Corwin said that a group who recently spoke to Star Tribune reporter Steve Brandt have been called racists on the Star Tribune website by Michael Elston, who is listed as the “Director of Partnerships and Community Relations” for FAIR. To Corwin, this counts as intimidation and retaliation.

Prior discipline of Bennett

The questions about Bennett’s outside businesses are just a few of many questions raised by some parents and teachers about how FAIR is being run.

“Bennett also was reprimanded for attending an out-of-town conference in the fall of 2011 with a female educational assistant for the district. The letter said he had a personal relationship with the assistant, whose presence wasn’t authorized by the district and who socialized with him on the trip. …

“Bennett was also reprimanded for getting the personal cellphone numbers of employees he supervised to send personal text messages, ask them out for drinks and dinner, and similar personal activities.”

Why save the school?

For parent Patrick Burns, stepping in to FAIR as a new parent last year was eye-opening. Burns’ oldest child started at FAIR in 2013, and he has two more who may start at the school this fall, depending on how questions about the school’s leadership are resolved.

Burns said that he and his family chose FAIR because of its reputation as an arts and integration-focused school, but, once there, they “walked into a mess, unaware.” At FAIR, they discovered an “incredibly high turnover rate of families and teachers” as well as a “school board that allows problems to persist.”

Burns also found that FAIR’s parent-teacher (PTO) group had collapsed. He has since helped restart the group. He recalls one PTO meeting when a group of students from the downtown Minneapolis FAIR school showed up, saying the school’s administration would not allow them to have a student council. Also, Burns describes an “atmosphere of punishment and intimidation” at the school, where “very unhappy parents and teachers are fearful of speaking out.”

FAIR is structured with one principal for two schools—the Crystal and downtown Minneapolis locations—and a school board that has no representative from FAIR on it. Instead, FAIR’s school board is composed of school board representatives from the eleven member districts that make up the West Metro Education Program. WMEP governs FAIR.

For Burns, this structure is not working and has created a climate of bullying and dysfunction, leaving Burns to wonder if the mission to educate students is getting lost.

Burns’ perspective is echoed by FAIR parent Mandy Teigland, who said, “We were sold as parents on what FAIR used to be,” but that the problems at the school cannot be overcome by memories of FAIR’s past successes.

Teigland says that the school’s money has been depleted by having to pay Superintendent Dan Jett’s legal fees stemming from his 2013 suspension. Also, FAIR had to pay for an interim superintendent to fill in while Jett was being reprimanded in 2013.

The FAIR teachers who spoke on the condition of anonymity also mentioned a concern for the safety of their students. They cited a “downpour of issues” and what they say is a “callous disregard for other people’s children.” One example: the time Bennett insisted a student could be sent home with a non-custodial parent, causing much upset and fear for the other parent. They also referred to disturbing student behavior in the downtown campus, where it seems high school students are allowed to misbehave and disrupt classes.

The teachers and parents who were interviewed, including Burns, Teigland, Chris Bur, and Jim Ramlet, said that “everyone acknowledges there are serious issues, but on one will take responsibility,” and that there are “no systems in place, and no checks and balances.” They cite a lack of communication, a situation in which teachers are continually punished and silenced through reassignment, and say that the principal frequently hangs up on parents.

Their hope, they said, is to save the school, and compel the board to step up and take seriously the “dire straits” the FAIR school is in.