A new climate of fear hovers over the Twin Cities’ Somali community after the FBI said last week that it’s investigating Minnesota Somali men who may have gone to fight with Islamist groups in Syria.

Although speculation about young men traveling to Syria had circulated for weeks, concerns grew in the community when the Voice of America radio network broadcast a report June 1 about the disappearance of Abdi Mohamed Nur, a 20-year-old Minneapolis man.

Nur’s sister Ifrah said in the radio interview that her brother sent her a text message, saying that he was headed to join fighters in Syria, hoping to die for Allah. She said in the interview: “He texted me and said, ‘I am going to join the jihad. Don’t worry about me — I’m in search for my way to paradise.’”

She added: “But when he started to attend Islamic classes at [Al-Farooq Youth & Family Center in Bloomington] two months ago, he changed. He grew very quiet. He stopped talking to people, even if you’re sitting next to him. All this time, he was up to something that we weren’t aware of.”

Nur and 12 other young men flew from a New Jersey airport for Turkey, she added. Community members speculate many of the men are have gone to Turkey en route to Somalia, others to Syria.

The Nur family informed the FBI about the situation. Ifrah Nur said the FBI told the family that the agency officials would do what they can, even though they cannot legally enter Turkey and bring Nur home.

The FBI has not publicly commented on Nur’s case, but has told reporters that it’s concerned about members in the community traveling from Minneapolis to Syria to join Islamist groups, who are fighting to oust President Bashar Assad’s regime.

“We believe that persons who have traveled overseas are traveling primarily to Turkey, and once they are entering Turkey, they are crossing unfettered into Syria through the common border,” Kyle Loven, spokesman for the FBI in Minneapolis, told the Star Tribune.

On June 3, the Minneapolis division of the FBI posted a note on its website, asking the public to report any information about individuals planning to travel to fight in a foreign country or who have been recruited to do so. (It’s a federal offense for American citizens to take part in armed conflicts in foreign countries, unless they’re in the U.S. military.)

Minnesota’s Somali community was in a similar situation six years ago, when authorities learned more than 20 Somali-Americans had left the Twin Cities to fight with Al-Shabab, a Somalia-based cell linked to the militant Islamist group Al-Qaeda.

“When we heard about our kids return to Somalia and join terrorist groups, we were shocked,” said Hashi Shafi, executive director for Somali Action Alliance. “We expect every young Somali to be a good citizen and to contribute to the society’s well being.”

Like many Somali-Americans, Shafi said, the new case has “shocked” him more than when he heard reports of the disappearances of the young men in 2008. He said that the question that the community cannot find an answer to is: What forces someone who grew up in the United States to go to an Arab country he doesn’t know? 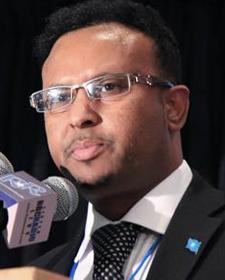 There are concerns that authorities are coming to the mosques as part of an ongoing investigation, noted Jibril Afyare, president of the Somali Citizens League in Minnesota.

Afyare’s message to the members of the community and mosques: “Collaborate with the authorities. It’s our interest to protect the security of this country.”

Abdirizak Bihi, a longtime community activist in Minneapolis, said such a case hurts the Somali community by tarnishing its reputation.

Bihi added that the participation of Somali youth in armed conflicts in Somalia and Syria is a result of a lack of adequate resources and programs for underserved youth groups in the Twin Cities.

“Al-Shabab targets vulnerable young men,” he said. “If we don’t engage them, if we don’t create permanent social and educational programs for them, then someone else will.”

‘Am I a terrorist or what?’

Many Somali community members say they denounce violence and terrorism anywhere, but they acknowledge there is a climate in the community of trepidation and fear of the FBI.

How it feels to be subject to FBI interrogations is well known to Mohamed, who requested his last name not be used in this article because of the sensitivity of his situation.

When his close friend Abdisalan Hussein Ali left for Somalia in 2008 and joined Islamist fighters, Mohamed was interrogated and subpoenaed. He said the effects that the interrogations had on him and other Somali students who then attended the University of Minnesota were painful and frustrating.

It was during my finals week in 2008. I was a sophomore. I was sitting with a bunch of friends — guys and girls — at the Somali Student Association office [in Coffman Union]. Two men came in and asked for my name. The way they approached me was really embarrassing. Everybody in the room looked at me like I was something else. Anyway, I sat with them outside of the building. One was trying to be rough on me, threatening me and stuff. The other one pretended to be the nice guy, saying, ‘Hey, he’s going to tell us the truth…be easy on him.’

They wanted to know about Abdisalan: What kind of person he was, if I was communicating with him, if he talked to me about his trip. Of course I knew Abdisalan. We went to middle and high school together. We basically grew up together. But he was a private guy. He never shared anything about this trip or what he was up to with me.

Then after about 40 minutes, the [FBI] handed me a subpoena. It was really a painful process. I couldn’t focus on my exams, I couldn’t sleep. I was stressed out. I was like, “Am I a terrorist or what?” I was going all through this just because I knew some of the guys that left.

Shafi said the relations between the Somali community and law enforcement has improved since the first group of the Somali-Americans left to fight in Somalia.

“The community is starting to understand the process now,” he said. “Authorities have frequently met community and religious leaders. The relationship between the community and law enforcement is much better now.”