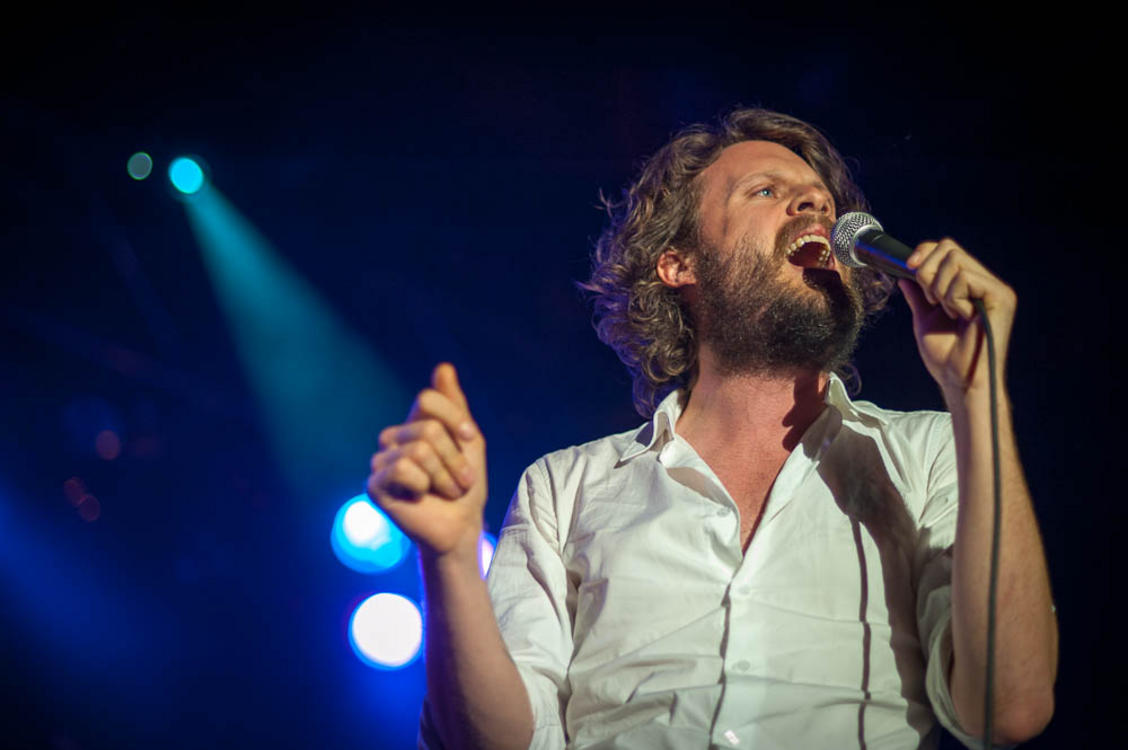 Minneapolis has seen a lot of Father John Misty in the last year. The man behind the man, Josh Tillman, and his bandmates have toured relentlessly since the release of “Fear Fun.” Chances are you didn’t catch them when they sold out the small 7th Street Entry, or even when they came by last Halloween to play to the always-obnoxious Fine Line audience. But if you were at First Avenue on May 21, you saw Misty and company in all their glory—giant psychedelic mural backdrop, roadie stuffed tiger, disco balls and all.

The Misty machine is well-oiled, if not a bit road weary. But the crowd’s energy fueled the band’s performance, even after having to stand through the tone-deaf, dynamically-challenged opener Solid Gold. When Tillman took the stage, the crowd erupted, and relentless entertainment ensued.

The band played through 11 out of 12 tracks from Fear Fun, including a very believable, countrified version of “Every Man Needs a Companion,” and a strung-out, heavy cut of “Hollywood Forever Cemetery Sings,” which found the frontman twirling the cord of a stage light around himself and letting out intermittent screams between verses and during the song’s noisy breakdown.

Tillman’s stage presence is the most exciting thing about a Father John Misty show. His approach is old-fashioned. Give a man a stage, and he should entertain. The spotlight, both literally and figuratively, shone on the lead man for the show’s 80-minute duration. His hip-swinging, dramatic, and very often interpretive stage moves had the crowd laughing and rolling their eyes simultaneously. It’s all ridiculous, yes, but it’s so damned fun to watch.

Don’t kid yourself either—Tillman knows how ridiculous his persona is, as evidenced by his between-song banter, something Misty fans have come to expect and relish in, and something that newcomers are often turned off by. One highlight was Tillman’s joking about how great it is to see all the individual cultures and places while touring after a fan gave the standard-issue, obnoxious call for “Free Bird.” He also gave a “brief summation” of the film Die Hard, playfully heckled the fans who repeatedly requested that he disrobe, and even gave a Bill-Hicks-esque rant about the pervasiveness of American fast food marketing. Sound absurd? It was. But that’s what makes a Misty show so fun and unique.

The band rallied through an 11-song set before leaving the stage to wait for their encore. Upon returning, Tillman played solo a wordy, comedic new song, followed by a full-band version of a risky, but rewarding cover of “Happiness is a Warm Gun.” The band ended the night with “I Love You, Honeybear,” the title track from their forthcoming record, but not before Tillman quipped that they would “one-up The Beatles” and end the show with one of their own songs.

One of the last things we heard from Tillman was him thanking the crowd for having a sense of humor. And that is precisely and simply the key to Father John Misty. It’s the key to his blatantly titled Fear Fun album, and it’s the approach one should have to his live show too. If you couldn’t see that, the joke might be on you.