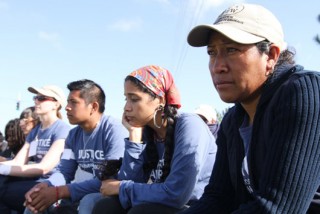 The Coalition of Immokalee Workers (CIW) are in the fifth day of a 6-day fast to draw attention to the unfair treatment of farmworkers in Florida tomato fields. The target of the fast, supermarket retailer Publix, has refused to join the Fair Food Program. The program’s demands include paying tomato pickers a penny more per pound. Retailers will also ensure safe and healthy work conditions and support ending child labor in the fields. Publix has refused to meet with CIW to discuss the Campaign for Fair Food.

Cheap labor is one ingredient that makes food retailing profitable for corporate America. The refusal to ensure safe work conditions and fair wages for farm workers is a core problem in a food system that claims to feed the world. Perhaps the claim should be adjusted, to reflect that farm laborers and their families are excluded from the world that industry claims to feed.

The plight of farm laborer is virtually missing from most mainstream conversations about food. It is as if food magically appears from farms located in far and distant places. Another twist of fate happens and food appears in the grocery aisles of supermarkets across America. The American public must begin to understand that the industrial food complex is not magical, but a series of complex interlocking relationships between multi-national companies that are supported by an even more complex set of public policies that often pit consumers’ health and wellbeing against corporate interests. Frequently, the interests of the general public, family farmers and poor people are forsaken in the name of profit. Caught in the web of corporate interests and federal policies, farmworkers are purposefully ignored.

The reality is that farm products, such as tomatoes, are harvested by someone. Usually, the workers are recent arrivals to this country looking for work to feed their families. The men and women who harvest our food find themselves in inhuman situations, including documented cases of modern-day slavery and farmworkers who are held by force, threatened, beaten, tortured and denied wages. These are some of the conditions by which tomatoes appear in supermarkets across America. To quote a song, “the price of silence is much too high.”

IATP joins the call for Publix to sign the Fair Food Pledge. It is the right thing to do, it is the moral thing to do.

We are also reminded that when we eat, we do not eat alone. Until farm laborers are paid fairly, when we eat, we eat injustice. We will stand in solidarity with Coalition of Immokalee Workers until the bonds of injustice are broken.