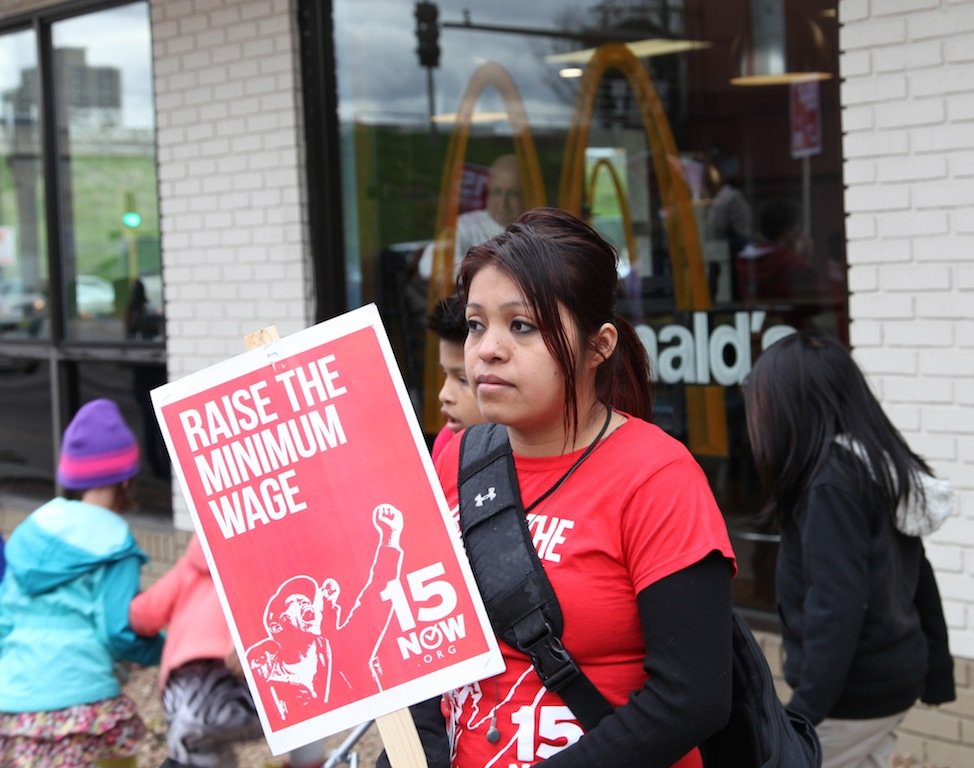 Bernenice, of Minneapolis, and her children stand outside McDonald's as a member of the company's management watches the rally from inside the restaurant.

A group of fast food workers and activists gathered outside the McDonald’s at the corner of 2nd Avenue and Lake Street in Minneapolis on Thursday, May 15 as part of a nationwide event to raise awareness about low wages and workers’ rights in fast food establishments across the country.

The crowd gathered outside as members from the McDonald’s corporate office looked on from inside the restaurant.

Several of the activists shared stories of struggling to make ends meet, like Bernenice, a single mother from Minneapolis.

“I am a single mother with three kids,” she said in Spanish, translated by Chris Gray, activist with the group 15 Now.  “I have only been able to find temporary work. They pay between $7.25 and $8 an hour. It’s not even enough to pay the rent.”

Josefina Franco, another activist at the rally, has friends and family members who work at McDonald’s.

“It’s urgent that the minimum wage be raised to $15. It’s urgent because it affects us, especially teenage kids. Latino kids are working to help their families, to save money for college. It’s really urgent,” she said.

Recently, U.S. Rep. Keith Ellison wrote an op-ed in The Nation, outlining the reasons behind the strike and why he supports it.

“They’re doing it because they have families to feed, parents to look after and basic needs that can’t be met at $7.25 an hour,” he said.

Bernenice, of Minneapolis and her children stand outside McDonald's as a member of the company's management watches the rally fr