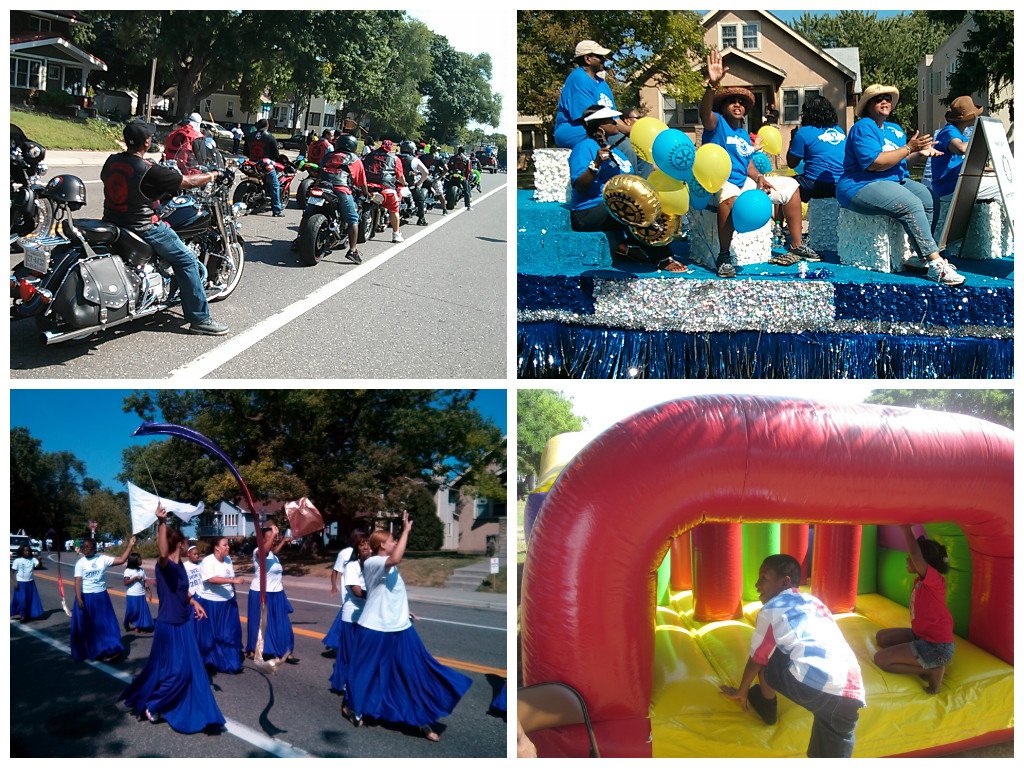 The late-summer heat wave didn’t deter the crowds from coming out to celebrate the Minneapolis Urban League’s 24th annual Family Day, Saturday, August 31. Family Day filled the streets of North Minneapolis with a fair-like atmosphere, a timely morale booster given the recent violence in the community. It was a festival with a purpose, as housing, employment, health, and fitness resources were on hand, in addition to food, games, and entertainment.

The festival kicked off with a parade that began on Xerxes Avenue N. and Golden Valley Road, and showcased a diverse mix of participants—from praise dancers to motorcycle clubs.

Parade watchers Richard Warren and Shirley Jaiyesimi (photo below) came from Coon Rapids to enjoy the festivities. “I wanted to get out of the apartment and see what’s going on in the community,” said Warren, from a choice spot under a shaded oak tree. Richard Warren and Shirley Jaiyesimi enjoy the parade in the shade.

Abby Mathieu, who walked the parade route as a volunteer for Minnesota State Senator, Bobby Joe Champion, has attended Family Day almost every year.  “It’s good to see everyone—my neighbors and friends. This feels like being with family!” said Mathieu. Abby Mathieu tries her best to make it to Family Day every year.

At the festival grounds, gospel music and uplifting crowd favorites like Common’s “The Light,” thumped in the background as attendees visited vendor tents and sought shade from the blazing sun.

The generous selection of games and activities for children was put to good use, as many gathered around colorful children’s entertainer, Silly Miss Tilly (Amber Corbett), to watch her bang the drums. Hugs from Super Why, the popular animated character from PBS, were also a hot commodity with the kids, as were the live pony rides, inflatable slide and bounce castle, and cotton candy. Silly Miss Tilly provides colorful entertainment for the kids with her drumming skills.

Hometown R&B star, Robert “RL” Huggar headlined the main stage and embodied the purposeful spirit of the event and community at large, as he powered through the evening rain to give a heartfelt and crowd-pleasing performance.

Visit the Urban League’s website for more information about Family Day. See more photos from the 24th annual Family Day in the slideshow above.

Art instructor, Shirley Jones showcases the jewerly on display at her table