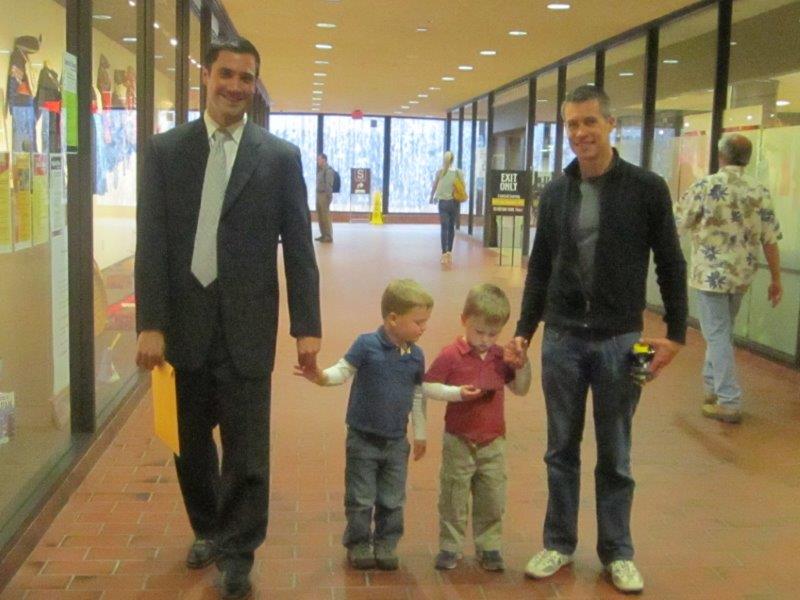 Now that same sex couples can legally marry in Minnesota, how will their families look different than those headed by straight people? Not very, if the Melchert-Zimmerman family is any indication.  Paul Melchert and James Zimmerman, both 41, met when they were introduced by a mutual friend nine years ago, and married seven years ago at Macalester Plymouth United Church. They come from traditional families: both Melchert’s and Zimmerman’s parents have been married for 44 years. Their lives when they’re not working are mainly centered around their adorable four-year-old twin boys, Gabriel and Emmett. “We like gardening, cooking [Melchert’s the chef, Zimmerman’s the sous chef], reading, talking… we’re kind of boring,” said Melchert. “We exercise every morning before the kids get up. We try to incorporate them into everything.”

Accidental activists
Melchert became involved in the fight for gay marriage when he was contacted by Project 515 and Minnesotans United and asked if, as a pediatrician, he’d speak out about the health of children raised in same-sex parent families. He was glad to step in and speak about his professional experience, even as his personal experience as a gay husband and dad. “As a pediatrician, I worked with families and I knew the literature,” he said.

“Initially Paul and I were a little hesitant about putting our children’s faces out there everywhere,” Melchert says. They decided to sacrifice some personal privacy for the greater good.  A YouTube video of Paul speaking at a press conference while Emmett started to grab the microphone, Paul’s mouth, and anything else within his reach, went viral.

It seemed only natural that Emmett and Gabriel accompany Paul and James to the Hennepin County Government Center on Thursday, June 6, the first day same-sex marriage licenses were issued in Minnesota. The family spent the morning there: Paul and James were among the first same-sex couples to receive a Minnesota marriage license, while Emmett and Gabriel played on a toy structure, gathering a small crowd of admirers. Later the twins split a donut while Dad (Paul) and Papa (James) chatted with a reporter over coffee.

Beginnings
Melchert grew up in Chaska, the middle child of three. “I have wonderful parents. They were very religious, Missouri Synod Lutheran. I grew up in that religion, it isn’t very tolerant,” he said. “I was a good student, in 4H –”

“He was the grand champion of desert dish gardening at the State Fair,” Zimmerman interjects.

“Coming out was hard,” Melchert admitted. He struggled to accept his sexuality. “It took until I was in medical school to accept it. The messages I’d gotten from church, home and school as I was growing up, about gay people – there was no positive messaging about being gay. There were only negative stereotypes [in the media].”

In contrast, Zimmerman, who grew up in a military family, with the usual number of moves and different schools, said he experienced “no messaging about gay people. No bombarding of negative images while my self-esteem was forming.” Though there was an absence of gay role models, “My family is very diverse; there’s a recognition of personal differences,” and he found the military community to be a close and welcoming one.  When he came out to his parents as a young adult, “There was total acceptance. They weren’t shocked, but concerned about how I’d be treated by others.” Like many parents, the Zimmermans suspected their son was gay; “They said, ‘we didn’t ask because we didn’t want make you uncomfortable.’”

“From almost the moment we met, we hoped for a life together,” Melchert said. “We both had always wanted a long-term relationship – marriage, kids.” Glancing at Zimmerman, who is negotiating the splitting of a donut, he said, “In all honesty… he’s kind, gentle, loving, incredibly smart, he’s HOT, he’s the handsome one – I married up.”

Forming a family
“Once my parents met James, they saw some really wonderful changes in me. I had a little angry edge when I went home, had never brought anyone home, felt a little resentment.  After I talked about James my parents asked to meet him. They saw what James did for me, he made me a better person. My brother-in-law said, ‘that’s the one.’ My parents stopped worrying about me.”

The boys were born using donor eggs, sperm from both men, and the services of a gestational surrogate.  When she became pregnant with twins (each man is the biological father of one of the boys) “We were thrilled – ecstatic!” said Melchert.

“Having twins was amazing, a dream come true,” Zimmerman said. “We wanted to find out/didn’t want to find out [their gender]. Having twin boys was enormously exciting, but knowing that we likely wouldn’t have another child, there was a sense of loss about not raising a daughter, helping her plan a wedding, that very unique and different relationship.”

Most of their family lives in Minnesota and Wisconsin. “We have two Christmases, family reunions, vacations together,” says Melchert. Last Thanksgiving was celebrated at the Melchert-Zimmerman home,with 21 people in attendance. Melchert changed jobs more than a year ago (he is still a pediatrician) in order to have more flexibility and family time (Zimmerman has worked in sourcing and procurement for a retail chain for nearly 18 years).

Going forward
When their video went viral, “I got Facebook requesst from every state in the union and countries around the world, including closeted people in Muslim countries like Dubai, Kuwait,” said Melchert. “They said things like, this is what a family looks like, can look like. Aside from anonymous YouTube comments, we’ve had nothing but support from the community, straight and gay.”

They hope to stay active in the community. “We’re so grateful to those who led the way, many years ago,” Melchert said. “We’ve really realized how important it is to be involved. If you want change, you have to be.” They’re particularly interested in transgender youth, safe schools, advocating for homeless youth.

Melchert spoke at the bill signing. “Standing on the steps of the Capitol, holding Gabriel, was the most incredible moment of my life, other than our marriage and the birth of our kids. It was so meaningful. My parents were in the audience, my brother, his wife and son…

“It’s right. We didn’t do all of this trying to incite anger. It was about standing up for family and what’s right. That’s what made it easy to do.”