Many had yet to catch up on sleep from a late election night four days earlier, but that didn’t keep around 90 people from attending the Twin Cities Media Alliance 8th Annual Fall Media Forum. Held at the University of Minnesota’s Urban Research and Outreach-Engagement Center (UROC) on November 10, this year’s theme was, “After the Elections: Change Work, New Media and the Challenges Ahead.” The day-long event provided an opportunity for participants to make sense of election results, analyze media coverage, contemplate challenges, and share ideas about valuable tools and strategies. It also served as the final major piece of TCMA’s New Normal 2012: Get Connected! project. 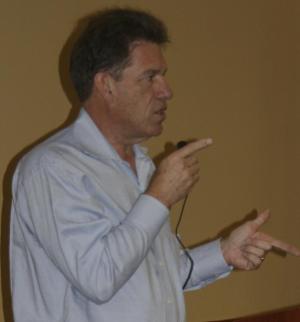 Minnesota’s Secretary of State, Mark Ritchie, kicked off the morning with an informative, thought-provoking keynote address. Ritchie praised the Twin Cities Daily Planet and other forms of decentralized new media for accurately reporting on many stories that mainstream media either missed or misrepresented during the election cycle, including what he called “the assault on the Constitution,” and the true nature of a proposed constitutional amendment that would have suppressed votes of several demographic groups. Constitutions, he argued, should not be used to do anything other than protect basic rights. The Secretary of State traced the historical roots of the state’s more easily amended constitution to the Civil War era. This election, he contended, presents a major opportunity to reexamine why Minnesota has the sytstem it does.

According to Ritchie, one of several underreported stories was the “deliberate defunding” of the administration of elections, something that results in  old equipment and long lines that keep some voters from voting. 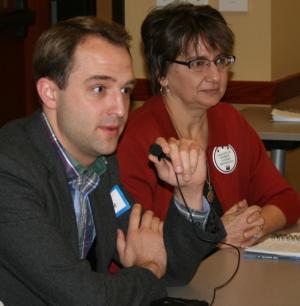 A panel comprised of people from organizations that worked to defeat the voter ID and marriage restriction amendments followed. Jake Loesch from Minnesotans United for All Families, Sherri Knuth from the League of Women Voters Minnesota, and Beth Newkirk from the Organizing Apprenticeship Project, assessed the significance of the amendments and their defeat.

Loesch observed that Republican legislators who wrote and promoted the amendments unintentionally started a conversation about equality and the implications of amending a constitution. Opponents, he added, demonstrated the power of conversation and importance of crafting well-framed messages that resonate with voters. Newkirk noted that both amendments were about excluding people, and that once voters had sufficient information they were affected at the “heart level.” She credited social media, smaller and diverse media, and the Twin Cities Daily Planet for their role in getting the story out. Newkirk noted that different frames work for different groups of people. For example, not all narratives speak to communities of color. For her part, Knuth observed that the ID amendment’s defeat required the combined effort of many area nonprofits, and that voters’ rejection of that amendment protected same-day registration, “which was huge.” 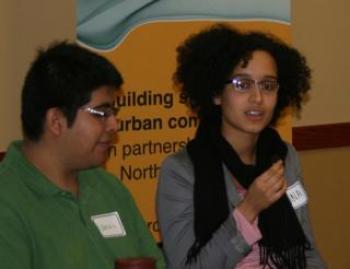 A media showcase highlighted the work of five area nonprofits. NAVIGATE MN was represented by Uriel Rosales Tlatenchi, Health Care for All Minnesota by David Zeller, the Organizing Apprenticeship Project (OAP) by Hana Worku, Give MN.org by Jeff Achen, and Envision Minnesota by Vanessa Perry.

There was general agreement among the panelists that when it comes to social media, smaller nonprofits must always remain open to trying something new. As Achen said, “You never know how effective something will be until you try it.” Knowing your constituency and how they receive information is crucial, said Tlatenchi. NAVIGATE works primarily with young undocumented immigrants who are far less likely to read email alerts than they are to notice and respond to texts or Facebook messages. Setting goals and then tracking who is visiting your website and where they’re coming from, is also important, said Zeller. Studying Google analytics is a fun part of his work, he added. A couple of examples of smart, successful recent new media projects were shown. One was OAP’s Voices for Voting Rights video series. On a lighter note, Perry revealed the campaign that Envision Minnesota had planned for this year’s Give to the Max Day.

The afternoon brought a presentation by photographer Wing Young Huie on the work he does to help understand who we are, in part through engaging people in conversation. This is something Huie has done in several settings, including outdoors for his University Avenue Project and at his Third Place Gallery. 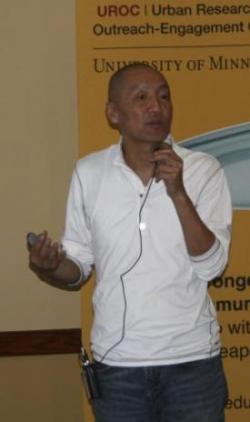 There were also several breakout sessions on a variety of subjects. Here are photos from two:

Karyssa Jackson of the District Councils Collaborative told about applying a Trusted Advocates model to the work DCC is doing to engage the community around planning for the Central Corridor lightrail line. McKenzie focused on The Advocates for Human Rights‘ One Voice Minnesota monitoring project, an initiative to help make communities across the state more welcoming to new Americans. Atlas-Ingebretson of the Charities Review Council stressed how essential it is that organizations and communities shift their focus from “diversity,” which she said, “often harms those you’re trying to engage,” to “cultural competence.” 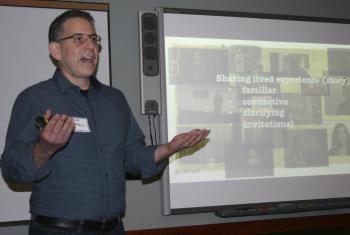 Capecci presented on the power of personal stories

John Capecci of Capecci Communications walked participants through the five qualities of an effective advocacy story. Other breakout sessions found Eric Davis of Beehive PR offering ideas about how to use new media tools to connect messages with people’s values, Jeff Achen on using new media tools to raise money and awareness of issues, Melissa Harrison of Allee Creative and Marcos Lopez-Carlson of the Twin Cities Media Alliance on using Facebook and Twitter to promote your issue, and Allison Churilla demonstrating the value of Minnesota Compass’s Neighborhood Indicators.