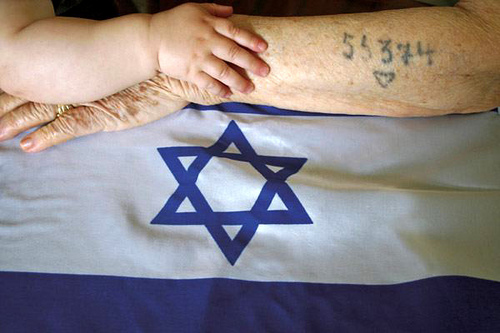 Tuesday was my grandfather’s first yahrziet– the anniversary of his death. He was a Holocaust survivor, a caretaker to his sick wife, and at the end of it all…an unwavering orthodox Jew. Reflecting on his life made me wonder:

How did my grandfather keep his faith? Didn’t he ever ask Where is G-d now?

My research about faith after the Holocaust led me to an interesting article on Chabad.org titled Belief After the Holocaust. The author points out that a question such as the above can only truly be asked by a believer. If the answer is that there isn’t a G-d, then there aren’t any questions to be asked.

This article also points out that even great believers have questioned G-d. A G-d that they had spoken to and that they knew existed. The Rabbis in the Talmud – a collection of oral tradition interpreting the torah – tell the story that G-d showed Moses how Rabbi Akiva would die. Moses then questions why such a good and holy man would have to experience such a painful death at the hands of the Romans.

Questioning doesn’t mean we don’t believe. It means we don’t understand. As humans, it’s within our nature to look for justice and rationalization. However, there are acts in this physical world that we may never be able to understand. But that doesn’t mean they didn’t have a purpose.

Why do some of the things that were so sacred to my grandfather sometimes feel like a chore or intrusion in my life?

Along with reflection, my grandfather’s yahrzeit also brought on a feeling of guilt. Who knew Jewish guilt was so strong it could live on through death? What would my grandpa say if he saw me eating meat in a restaurant, or working on Shabbos, or passing up an opportunity to give tzedakah? Why do some of the things that were so sacred to my grandfather sometimes feel like a chore or intrusion in my life?

It’s because I take the fact that I can practice my Judaism for granted. In fact, I think a lot of our generation does.

Forgive my rough analogy, but it’s like when you turn 16 and you’re so excited to finally be able to drive. You find every excuse to get behind the wheel of a car…even if it’s to run errands for your parents. But after awhile, driving becomes the norm. You get in the car on a daily basis and never think twice about it. But if someone suddenly told you they were going to take away your license you would be beside yourself. You would realize how valuable the ability to drive is and you would do everything in your power to keep your license.

Growing up, I watched my mom light the Shabbos candles, felt awe listening to the crescendo of voices during Kol Nidre, and eagerly sang songs with my Hebrew school class. But somewhere in my 20’s with heading off to college, getting married, and beginning a demanding career I began to take it all for granted. Fortunately for me, I don’t foresee my ability and right to practice Judaism being threatened in the near future. I need to create my own sense of urgency. And I’d like to help you create one too.

So I’m giving you a challenge. Whether it’s saying the Shema before you go to bed, or making Kiddush on Shabbos…do the things you once loved to do as a kid. Or the things you always wish you had done. Do the mitzvot you’ve been saying you’re going to do. Because you have the right to. You have the ability to. And our grandparents weren’t always that fortunate.