The sun sets on a printing press, and perhaps print journalism in general, at the Minnesota State Fair. Photos by Karen Hollish.

I practically had to wrestle John Hubin for his email address, which he finally released with a great deal of hand-wringing, reluctance and curmudgeonly grimacing.

“I don’t like to sit any longer at the computer than I have to,” lamented Hubin, editor of the News*Mirror in Hector, which has a population of close to 1,200.

Hubin, below, served as one of the honorary editors of the Minnesota Newspaper Museum, an annual Minnesota State Fair attraction that pays homage to the fading glory of print media. As part of the volunteer position, he greeted visitors, answered their questions, and groused about the Internet’s ill effects on our intellect. 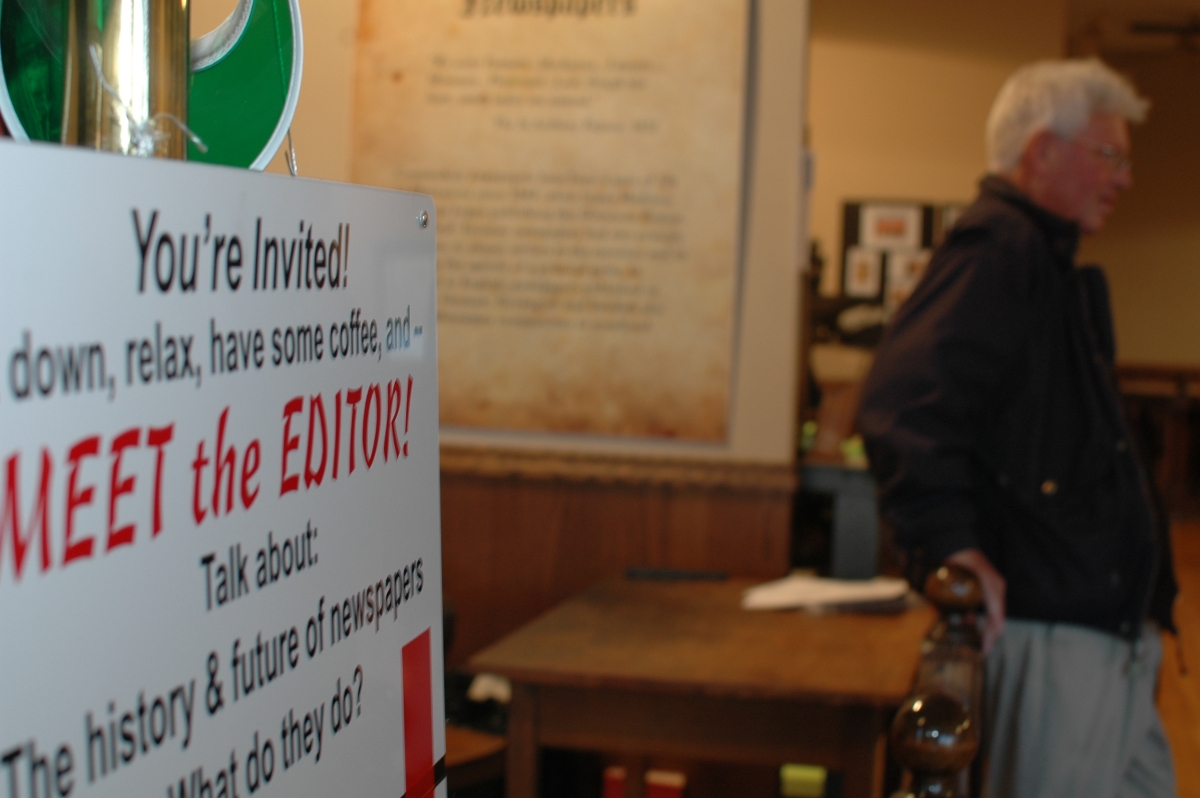 I went prepared to be romanced by the looks and sound of a working Linotype machine — and on this matter, the exhibit certainly delivered:

But I was surprised by Hubin’s antipathy toward online news sources and his disdain for the Internet in general. I imagined the museum would be staffed by someone who appreciates and savors print media’s glory days, but at the same time embraces new storytelling mediums — in short, someone a bit more like me.

As a former staff reporter at a small daily newspaper in northwestern Wisconsin — and as a current freelance contributer to this online news source — I have a foot in journalism’s past and present, and I appreciate both. Nothing compares to the print edition of the Sunday New York Times, which I digest slowly over the course of the week.

But at the same time I love reading online news, both from generally agreed-to-be-reputable sources, such as MPR and the BBC, and not-so-respected outlets (think Facebook, Jezebel and Craigslist’s missed connections). I’m as addicted to the Internet’s time-wasting pleasures as any other American 31-year-old lucky enough to have a laptop and wi-fi at home.

But for Hubin the battle is black-and-white, and print news is the superior choice for thoughtful people.

As for the future of newspapers, I asked him, is there one?

“It depends on how everything shakes out,” he said. “People are going to have to decide whether it’s going to be better to eat butter or margarine.”

Considering the Star Tribune‘s lip balm flavor this year was butter, it was an apt comparison. But it’s one that certainly has its limitations. Blogs, bemoaned as being low quality by Hubin, would fall in the margarine category — though it was just such a blog by Mary Treacy that led me, and likely other folks, to check out the museum in the first place.

His family-run newspaper is operating on an old-fashioned model. He has a seven-person staff, and they are paid living wages and receive insurance benefits, he said. They’re print-only, and they don’t even have a website.

His chain of success is simple: When the season’s crops are good, the businesses in his community buy advertising space in the News*Mirror. This leads to good financial numbers for him, and for the people he employs.

“Down here,” he said of the Twin Cities, “it’s a different story.”

Part of that difference can be seen in action at the museum, which used to put out an original in-house paper every day. Today, he said, they print out the same content every day and just change the date.

“Twenty years ago, when we started this thing, we had enough people to do it,” he said. “Then, as we all died off, we got less and less volunteers.”

This year, much of the up-to-date fair news was provided to readers through blogs, the vast majority of which, I venture, were produced with little or no payment for the writer.

Now here’s a conundrum: How can we bring the living wage and benefits paid to Hubin’s print people down to the Internet-soaked Cities?

Alas, I still don’t know, and neither does Hubin — even though I’d like to see Internet pay, and he’d prefer it just go away.

While we differ on this, Hubin and I both agreed on one thing: The machines and history on display at the Minnesota Newspaper Museum are truly special to behold.

And while I extracted his email address, he managed to squeeze out a promise from me to volunteer at the museum as an editor next year.

So look for me in Heritage Square 2011 — I’ll be the laptop-toting new media girl with a penchant for the sounds, smells and feel of old-fashioned newsprint. 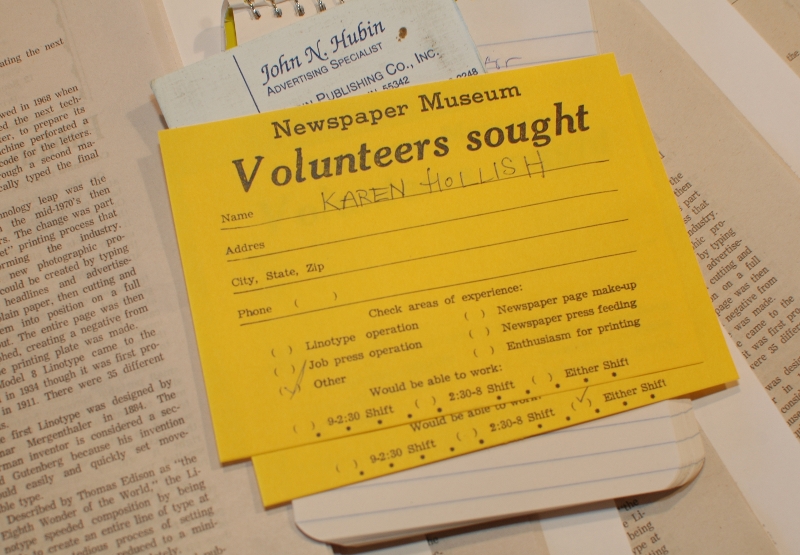