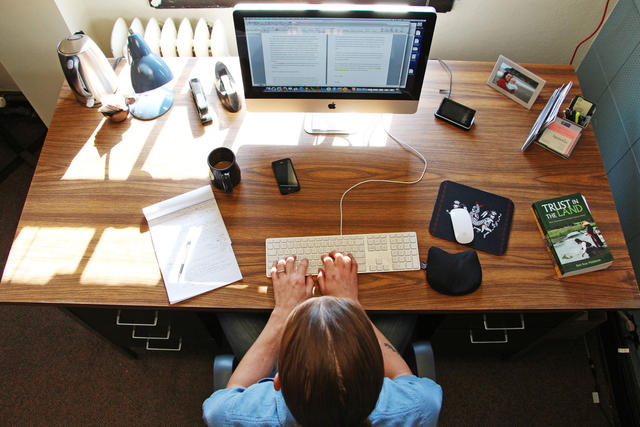 He tries to set aside a little time for it every day, and he’s found it’s easier to stay motivated when working alongside others.

This wasn’t always the case. Mayo, an assistant professor in the University of Minnesota’s Department of Curriculum and Instruction, spent his first years as a faculty member writing alone. But when he heard about the Faculty of Color writers group, everything changed.

The group brings together junior faculty of color — who can often feel isolated in the university community — to work on writing projects, learn techniques for improving their writing and meet other faculty who are at a similar stage in their career.

The writers group, which is part of Office of Equity and Diversity’s Institute for Diversity, Equity and Advocacy, is one of a “constellation” of programs that help with recruitment and retention efforts for faculty of color at the University, said Louis Mendoza, OED’s Associate Vice Provost.

Catherine Squires, an OED faculty fellow, implemented the group last summer, after she attended the 2010 Keeping Our Faculties of Color symposium, which is organized by OED.

One of the presentations at the symposium, given by faculty from the University of Washington, discussed the effectiveness of support systems, including writing groups, in alleviating concerns often expressed by faculty of color — namely, not having enough time to write, feeling isolated in their departments and struggling to find mentoring.

“Faculty do often get together and create their own writing groups,” Mendoza said. “What was important about this one was that it was an effort to institutionalize it.”

The group is meant specifically for junior faculty — associate and assistant professors — because they often find it difficult not just to find time to write but also to admit when they’re struggling.

“This way, they could have sort of a safe space to talk about their anxieties and to get strategies from people who are a little bit more experienced than them,” Mendoza said.

These struggles can be particularly acute for junior faculty of color, he said.

In 2011, people of color made up about 17 percent of the University’s total faculty, according to the Office of Institutional Research.

“They’re coming in with a certain amount of anxiety about performance — ‘Can I do this? Can I survive? Can I measure up?’ They’re even susceptible to feeling like, ‘Do my colleagues believe that I deserve to be here?’”

A sense of camaraderie

Finding other faculty who are in a similar situation can ease the transition to the University.

Clint Carroll, who is beginning his position as an associate professor in the American Indian Studies department this fall, joined the group this summer to work on his first book.

Carroll, who is the first member of his family to graduate from college, said the group has helped him navigate being a faculty member.

He said it’s helpful “to have other faces in front of you, other people that may have gone through similar situations.”

Within individual departments, faculty members often leave each other alone to work, he said. And though he said that makes sense, it can be difficult to know how to accomplish what needs to be done.

Mayo said while he has been fortunate to receive mentoring through his department, the sense of camaraderie was missing.

“I come from a context where I’m used to being one of a handful,” he said. “It’s the norm.”

Squires said writing groups are “a good, easy tool” to help build a sense of camaraderie among faculty.

Carroll agreed. “Being familiar with who else is out there, having their contact information and being able to exchange ideas and thoughts … is always valuable,” he said.

In addition to building relationships, faculty who have participated in the writers group have found the structure it provides to be crucial.

Working alongside others provides not just a sense of camaraderie but also a source of motivation. Just in the way that exercising with another person is easier than exercising alone, Squires said, so is writing in a group.

Mayo and Carroll agreed that just setting aside time for group meetings was helpful.

“It breaks you out of that solitary space,” Carroll said.

Because of the group, Mayo now tries to write 20 to 30 minutes every day, rather than in a block of several hours at the end of the week, he said.

Ultimately, the group allows faculty to prioritize their writing amid the many obligations their job brings.

Designating time to write is the most important thing to do as a junior faculty member, Mayo said, but it is also the most difficult.

“You’re so busy with meetings and teaching and student advising that you forget you have to carve out time to write,” he said.

Now, writing is his priority, he said.

“This has helped me to understand I can put it first.”