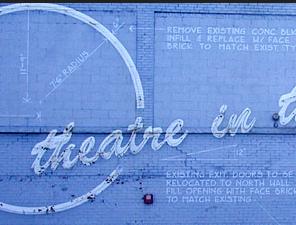 I have been a volunteer at Theatre in the Round for at least eight years.  During this time I have seen many productions, most of which I really enjoyed, some I was indifferent to and just a few that I would not have recommended.  However, I have never seen a production that I felt compelled to write about until this past weekend when I saw The Drawer Boy.

Since I am associated with Theatre in the Round it would not be appropriate for me to write a review.  This is my reflection on a production that I felt was top notch in all areas from the acting to the directing to the set and sound design.

The Drawer Boy, written in 1999 by Michael Healey, tells the story of two friends and how their lives are changed by the eager young actor who arrives at their farm to do research and ends up causing the two to revisit their past.  This production is directed by Jamil Jude, with set design by Laura Tracy and sound design by Christy Ellis.

Angus (Keith Shelbourne) and Morgan (Bob Malos) have been friends since childhood.  They grew into young adults and entered the Second World War together thinking they would find adventure.  Instead in Europe they found the friendship of two English women, “one tall and one taller” as the story goes while doing their best to avoid battle.  Angus was injured during an air raid and suffered permanent brain damage which caused a loss of memory.

For years Morgan has told Angus the story of their life and their love of the two women they met.  His story ends tragically and leaves Morgan and Angus continuing to live on the farm for 30 years with Morgan taking care of his friend Angus.

One day Miles (Mike Swan) knocks on the door of their farmhouse.  His acting troupe is writing and performing a local play and he wants to live with them for a few weeks to learn about the life of a farmer.  As he spends time with the two friends and hears their story, his reactions and questions help Angus to dredge up some old memories.  These memories cause Miles to question their story and lead to a surprising revelation and a truth that is in many ways more compelling.  The three actors are all convincing in their roles and the story within a story is clearly told through their performances.

After seeing the play I began to think about the coverage of NBC’s Brian Williams possibly telling a different version of a story that took place in 2003 during his coverage of the Iraq War.  We have to ask ourselves how much of the telling of our life story is shaped by the reactions we receive and/or our desire to protect ourselves and those we care about.  Is telling a good story better than telling a true story?