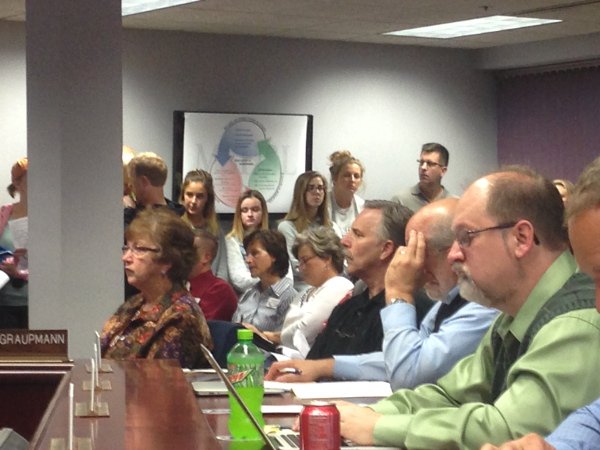 On Thursday morning, the Minnesota State High School League tabled a proposal that would provide guidance to schools on inclusion of transgender students in high school sports.

For two hours on Wednesday afternoon, and again on Thursday morning, supporters and opponents of transgender inclusion in high school sports took turns giving their input about the proposed policy.

Though the MSHSL announced last spring that is was researching transgender inclusion, the issue did not ignite until an anti-LGBT group placed a full page ad in the Star Tribune that painted transgender students as dangerous. The Minnesota Child Protection League placed the ad, and have been joined by the Minnesota Family Council and the Minnesota Catholic Conference — two groups opposed to LGBT rights — in organizing opposition to the policy.

Most of the speakers in opposition to the policy had a connection with either the Child Protection League or the Minnesota Family Council.

Autumn Leva of Minnesota Family Council complained that that group’s letters to the MSHSL weren’t responded to. Her group is housed at the office building at 2855 St. Anthony Lane in Minneapolis. Sharing the same building is the Minnesota Catholic Conference. MCC’s Jason Adkins testified that transgender inclusion by the federal government is a “spurious interpretation of Title IX by the Obama administration.” James Ballentine of the North Star Law and Policy Center also testified in opposition. His group is also located at 2855 St. Anthony Lane.

Melissa Coleman was concerned that transgender students will have a competitive advantage in sports and opposed the policy. Coleman was also an outspoken opponent of marriage equality, and is the authorized agent for the Minnesota Religious Freedom Forum and the North Star Law and Policy Center, both of which are housed at 2855 St. Anthony Lane. She did not identify that affiliation.

Also speaking against the policy was Renee Carlson and Evan Wilson, both of whom spoke out against marriage equality and were part of Lawyers for Marriage, a project of Minnesota for Marriage which is housed at 2855 St. Anthony Lane. Neither announced any affiliations.

At the start of the meeting, Dave Stead, head of the MSHSL tried to dispel some of the myths being spread by anti-LGBT groups about the policy.

“When people talk about people using restroom and 14 year old boys showing with girls, that’s misinformation that has been presented to you for whatever reason — I’m not sure but none of that is in the current draft. The Child Protection League used a draft that had been changed — if you look at the website and some of you had, it talks about the transparent policy and then it talks about the latest policy. The latest policy is what we are looking at today. The ad in the paper last Sunday talked about lots of things that weren’t in the latest policy. I can only guess why that happened.”

On the question of mandatory “transgender sensitivity training,” he said: “People have tried to misrepresent that.” He said that it’s included in the policy as “something schools might want to consider”

In fact, the first draft of the policy never mentioned any training. The second draft — the one under consideration on Wednesday and Thursday — never mentioned training either. Instead, under the section titled, “areas of awareness,” it stated, “Encourage schools to educate teachers, counselors, coaches, administrators, parents, students, and others regarding transgender sensitivity relative to students.”

Despite that, the Minnesota Child Protection League took out a full-page ad in the Star Tribune that read, “‘Transgender sensitivity training’ is required for all students, teachers, counselors, coaches, staff, and parents at school district cost.”

Attorney Renee Carlson was one of several speakers who were misinformed about the policy, specifically the sensitivity training element.

She said the policy forces schools to “embrace transgenderism through sensitivity training, training that the school does not have an option to decline according to this policy” and “imposes a narrative regarding human sexuality that is different from my own as a parent and leaves no other options.”

Becky Swenson asked, “How much will it cost to provide training? She lamented that OutFront Minnesota was consulted about the policy and said. “I wonder if the true goal isn’t transgender promotion… I’m sad to see that any disagreement is called hate speech.”

Religious school also testified that they objected to the proposed policy on religious ground.

Dr. Jeff Mattner of the Association of Christian Schools International asked the board not to step on the rights of religious schools to exercise their faith and convictions.”

Rev. Fredric Hinz of the Lutheran Church – Missouri Synod, a Lutheran denomination that rejects LGBT rights and advocated ex-gay conversion therapy, echoed some of MNCPL’s misinformation. “We are also disappointed that the proposed policy makes no apparent efforts to acknowledge the financial burden that it may impose on participating schools,” he said. “We find it ironic that while going to great lengths to advocate for greater sensitivity to the concern of transgender students, the proposed policy seems to lack any sensitivity to the vast majority of student athletes who may be forced to forfeit their privacy rights in sharing public facilities.”

He added that his faith rejects people being transgender.

“It is a policy that presumes that our true essence as human beings is somehow separable from our bodies that our bodies are somehow meaningless. This is a view which stands in direct contradiction of the religious views of the vast majority of students and their parents…to adopt this policy would be to intentionally endorse one particular religious view over another.”

Brian Sullivan head of Maranatha Christian Academy and Living Word Christian Center said he opposed it because of “deeply held religious conviction… whether it’s intended or not, it discriminates against these schools on the basis of religion.”

Michele Lentz of the Minnesota Child Protection League said her group is not spreading misinformation about the issue and defended her ad. “If you ran an ad, we wouldn’t have had to. Now parents know.” She challenged the very idea of transgender people. “The underlying assumption is that gender is a choice and not a matter of biology, which is absurd but that is what is at the heart of the controversy.”

(In reality, gender is considered to be “the range of characteristics pertaining to, and differentiating between, masculinity and femininity.” Sex is determined biologically. Lentz confuses the two.)

Despite religious arguments against the inclusion of transgender students, many people turned out to support the policy.

Ryan Vernosh, Policy and Strategic Planning Administrator for the St. Paul Public Schools, read a statement by the school district. “St. Paul Public Schools supports the policy for athletic participation for transgender athletes. We bel that it is our moral responsibility to welcome our students’ whole selves into our schools.. No child — let me repeat that — no child should be required to check a part of themselves at the door in order to gain access to school programming, including participation in student athletics.”

Phil Duran, Legal Director for OutFront Minnesota noted that the organization had received an increase in calls from parents of transgender students. “If the increase in inquiries that we received is any indication, more students with their parents’ support will be seeking out opportunities to participate in school activities as transgender. The league’s proposed policy… is a powerful initial step forward.”

Zeam Porter, a student and transgender athlete, addressed the board as well.

Melissa Thompson, a parent, told the board, “I’m here to let transgender youth in our community know that my family believes you deserve to be respected and protected just like anybody else. i believe by adopting this policy we can change the current toxic climate of fear,” she said. “Seeing the attacks by this Child Protection League, a group of adults that is growing by the day, on this statistically tiny group of students, speaks volumes about their character and their motives. They have made and spent quite a bit of money creating this pseudo-crisis in order to generate financial support.

Fred Combs, a parent of two adult children, addressed the board: “Thank you for being proactive in developing this policy. He said the anti-transgender ad taken out by MNCPL is “a perfect example of why students transgender or otherwise need this policy.”

Amy Marty, testified, “As a transgender woman, and this is the first time I’ve come out in public…I urge this board to adopt this policy because it looks like it would create security and well-being for transgender students.”

Claire Kohner said, “I didn’t choose to be transgender. No amount of reparative therapy or religious abuse can change who i am. There’s a lot of misinformation going on about the safety of students. 78 percent of transgender students are harassed and bullied, including me. 35 percent are physically assaulted K-12, including me. 12 percent are sexually violated in schools K-12. I want to look around this room and I want you to look me in the eye and ask who is afraid of whom. We are afraid of you. The organization that took out the ad in Sunday’s paper was also against the bullying bull, they lobbied against the bullying bill, and according to their own website, they lobbied against that bill because it offered protection to LGBT youth. There’s obviously an agenda that created a boogeyman man argument.”

Mike Martin read Bible verses, but in a different manner than previous speakers. “I know there’s a lot of people in the room that belong to the Christian tradition. Matthew 25:35: I was a stranger and he welcomed me. I wonder how many people who stand in opposition to this draft policy on transgender inclusiveness know anyone who identifies as transgender or is gender nonconforming… I also believe that the fact that some people having equal rights — if that makes you uncomfortable, there’s no fundamental right to not get out of your comfort zone. I encourage those that stand in opposition, to open your heart to learn more about the issue and to speak respectfully about the people who stand to be affected.”

The debate continued on Thursday morning just before the MSHSL board was set to vote.

Ellisa Lee, Macalester student, testified, “Despite all the hate and bigotry, we’re all striving to be our whole selves every day.”

Awen Briem, a parent, said, “I want for my son, his friends and all youth to be able to compete…free from discrimination.”

Emily Downs, parent of transgender child, said, “We’re all here for the same reason, for the love and well-being of our children… I ask the board to join us by being brave themselves.”

Julie Tilsen, a professor of psychology at the University of Minnesota said of the religious right influence on the debate, “This instigation of panic is based on old and highly sensationalized stereotypes.”

The MSHSL board deliberated into late Thursday morning and most agreed that there is a need for a transgender-inclusive policy. However, the board voted to table the issue until the Dec. 4 meeting, and set up a committee to reevaluate the proposed policy to include community input.