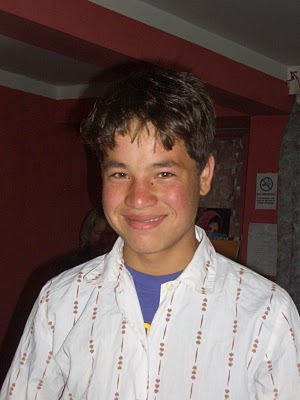 She is an unveiled, defiant young woman. He is a filmmaker still recovering from his kidnapping 6 ½ years ago. She told me this morning, only half in jest, that she plans on becoming the President. He, at only 15, has known the pain of losing his father but is still willing to stand up to the intimidation of much older adults.

What Zahra, Basir, Shahrbanoo, and Abdulai have in common is a commitment to peace, acts of courage, and, yes, they are all tired – tired of living in a nation of fear, corruption, violence, ethnic animosity and gender discrimination. One turns 30 in a few months, another 20 next week. At 23 and 15, the other two belie their ages with hard-won wisdom. All four took the gutsy step of protest in the streets of Kabul on Thursday, March 17th with 35-40 others, draped in bright turquoise blue scarves and holding banners reading “Today we make a resolute stand for a peaceful tomorrow”, “The citizens of Afghanistan say No to war”, “We wish to live without wars”, and “Warmongers, do not turn our houses into war bastions!”

Some are members of the Afghan Youth Peace Volunteers (AYPV); others belong to organizations that have aligned themselves to the AYPV, despite the enormous distrust many Afghans feel for their fellow citizens. These 4 collaborate together hoping to find ways to encourage each other in what is an admittedly lonely struggle – at least for now. While their elders sit in fear of the return of the Taliban, these young, energetic activists want their nation to move forward, not merely crouching in fear or wallowing in corruption.

Each of the four had 25 committed peacemakers from Germany, Australia, and the US travel with them for a week, listening to them, weeping with them, and smiling and hugging one another; peacemakers from four continents sharing stories and food, lighting candles to remember the victims of war. One of the International Peace Delegates, now in his 80s, had marched in the Deep South of the US in the days of the Cold War – a march from Canada to Cuba – and was there for the birthing of the Civil Rights movement. Two other internationals were so young that they couldn’t remember the first Gulf War in 1991, just a year older than my youngest son.

Abdulai laughs easily but he also carries a deep wound. It was the strength and courage of his older brother, Khamed Jan, who carried his younger brother up the mountains to hide from the Taliban who had killed their father. Like any 15 year-old who experienced such a traumatic loss, Abdulai has moments of anger and times of despair but when he was scolded by adults who told him he is naïve and unrealistic for advocating that negotiations to heal Afghanistan’s ethnic rivalries must also include the Taliban – at least lower-level Talibs – he quickly reminds the adults that he has already had a cup full of pain and wants the cycles of hatred, vengeance, and revenge to end. 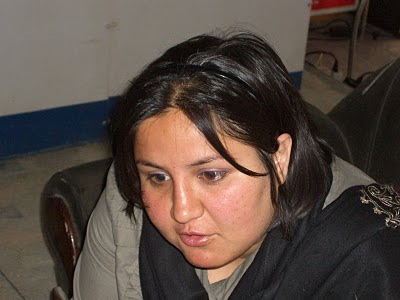 Knowing a little of how hard it is for any woman – let alone one who openly defies her extremely patriarchal culture – one of the Americans asks Zahra if she’d consider moving to India, Pakistan, Iran, or even the U.S. to give her some breathing room, a safer space, from which to operate. No, this is my country; I am an Afghan woman was her response. I could see in her sad eyes and drooping shoulders as she let down her natural defenses to tell us how tired she was. We listened, our hearts breaking at her pain – yet strangely celebrating the strength of this young woman at the same time. She had invited many people to join her in the peace march in the street last Thursday who said they’d come but then didn’t answer her calls on the day it was happening.

She is trying to bring change to Afghanistan but says she sees little change – she doesn’t witness good results. She tried politics for a couple of years but was disgusted with the fraud and corruption. People accept them just because of money, she observed. Although she likes some of the ideas of Dr. Barshardost, a Member of Parliament, she is not sure about his strategy. But she still sees it as too much talk and not enough action. “He should do, he should Act. People are tired of speaking, they want to see action. Barshardost hands out money (to the needy) but he should help with real development.”

“I’m tired; I don’t know how I can accept this situation. I want to work for peace but I worry that I am alone. I can’t find more people who have the same idea. When people are hungry, how can I say to them that you should work for peace? When they are jobless, how can I ask them to take a political stand? They can only think about food and work.” Then one of the internationals tells her that the recent uprising in Egypt didn’t happen overnight. It was people just like you working behind the scenes for years – even we didn’t see how fast the change came. 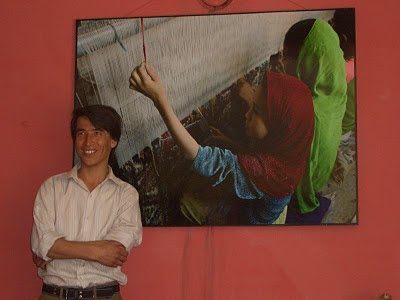 Basir, a photojournalist, told me he awoke from a nightmare a few nights ago, fearing he had a hole blown into the back of his skull, waking up with a premonition that it might be best for him to lay low today. It might be a wise decision since he had a similar dream the night before the Taliban kidnapped him in 2004. Although it has been more than 6 years since that event, he told us he is more concerned about his physical safety in the past year than anytime before. He told us that suicide bombers could strike anywhere. Although his beautiful photographs grace many of the walls at the Open Society office, greeting us every morning with his colorful images, most of his work is at the 3rd Eye Photojournalism Center, the place where we held the candle light vigil for victims of war several days ago.

Basir tells us the story somewhat matter-of-factly, as if keeping his emotions at arm’s length, he won’t have to be re-traumatized. He was traveling with two other photojournalists and he doesn’t give us the details of the kidnapping or how long they were held. The female filmmaker was shot by the Taliban and she remained lying on the ground, the Taliban assuming she was dead. I wasn’t clear on where she was shot but in moving away from her, allowed her to escape and survive. Meanwhile, the Talibs held Basir and the other photographer, hoping to exchange them for prisoners held at Baghram’s prison on the sprawling Air Base. During this ordeal, one of his captors became sick and Basir helped him. This captor was sympathetic to them, telling them what was going on, the hope of the prisoner exchange.

However, it became clear that neither the US or Karzai governments were interested in a prisoner swap and so Basir was told by this man that they were to be killed the next day. The man he helped indicated that he was powerless to release them and was sorry it had come to this. As they were on the move to the area where they were to be executed, the Talibs got word that another group of their comrades had just ambushed and killed “an international [soldier] and an Afghan soldier.” His captors, elated with the news lit a fire, and began dancing and celebrating. With the forewarning about their planned execution, Basir and his friend used the distraction of the celebration to escape.

So when Basir tells us seven years later that “things are much more difficult now”, referring to suicide bombing attacks that can happen “anywhere”, it may be a sign of hyper-vigilance as a result of post-traumatic stress or it can be just a realistic evaluation of the depression and fear engendered after decades of war and senseless violence. Basir and my other three friends have not known any extended periods of peace in their lifetimes – yet they are still willing to embrace us, visitors from the country which has armed both sides of this on-going tragedy. 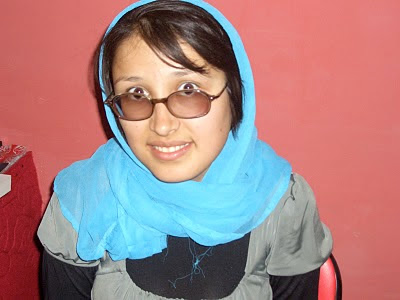 Shahrbanoo is being mentored as a filmmaker by Basir and also acted in one of his films. She and Zahra “escaped” to Kabul – leaving their very conservative, prescribed-roles, rural homes (without their parents’ knowledge or permission. [Their parents have followed them, moving to Kabul.] Basir serves as an “older brother” in picking them up and riding with them to the office. Never knowing who is watching, and with so many rigidly conservative men ready to pounce on any women brazen or foolish enough to travel unaccompanied by a male family member, having Basir or Asif accompany them is a helpful and prudent thing. I’m drawn by their lively spirits and their ready laughter with us but also know the deep well of pain they carry with them. They obviously draw support from each other.

For their future, for the future of their country, this war must end. They are very clear to us: Get the US troops out as quickly as can as be done responsibly. They don’t want to see the Taliban fill the political and military vacuum that could be created with too quick a withdrawal but the present reality must change. Karzai and his cronies may be hopelessly corrupt – but with courage and insight, these young people are getting ready to lead a new Afghanistan. It is a privilege to have listened to them.