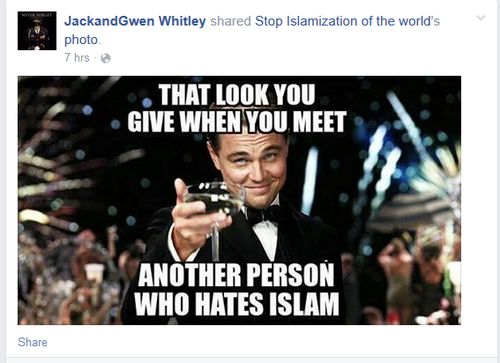 UPDATE: Whitley appears to have removed his profile from Facebook, following a wave of condemnation from both Democrats and Republicans following Jennifer Brooks’ post about Whitley in the Star Tribune. We’ll be posting about the reaction shortly. [end update]

A status posted today on the personal Facebook page of the Big Stone County Republican chair Jack Whitley suggests that an understanding of the Minority Liberty Alliance’s message of inclusion hasn’t quite taken hold among conservative leadership living beside Minnesota’s western boundary waters. 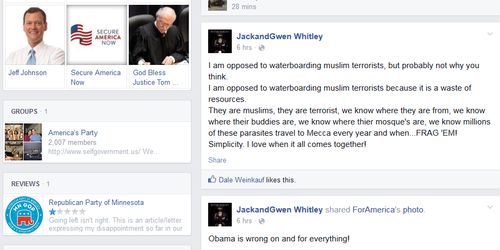 As the screenshot at the top of this post suggests, the status isn’t an isolated expression of anti-Muslim sentiment on Whitley’s Facebook page. There’s also this, this and this.

A 2008 study published by the John F. Kennedy School of Government, Estimating the Impact of the Hajj: Religion and Tolerance in Islam’s Global Gathering, concluded:

. . . [Participation in the pilgrimage to Mecca] increases belief in equality and harmony among ethnic groups and Islamic sects and leads to more favorable attitudes toward women, including greater acceptance of female education and employment. Increased unity within the Islamic world is not accompanied by antipathy toward non-Muslims. Instead, Hajjis show increased belief in peace, and in equality and harmony among adherents of different religions. The evidence suggests that these changes are more a result of exposure to and interaction with Hajjis from around the world, rather than religious instruction or a changed social role of pilgrims upon return.

Let’s hope Whitley can control himself when he visits Willmar, Marshall, Worthington or St. Cloud, home to Somali-American communities drawn by economic opportunities in those cities.