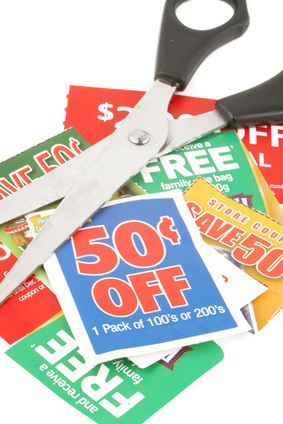 Due to the current nasty recession, everyone is looking to save an extra buck here and there. Some people are making a sport out of it through a phenomenon known as extreme couponing, in which consumers buy almost every product solely using coupons. Becky Schack, a currently unemployed mother from White Bear Lake, is a super-shopper who saves a lot of money with coupons.

“When I generally go shopping I have a coupon for everything I’ve bought,” she said. “Usually what happens is when they see me with my big clutch of coupons, they look annoyed, but when the cashier finishes scanning them and gets my new total people are usually impressed. Like, ‘Wow that’s a lot of money!'”

Schack estimates that so far this year, she has saved about $530.

“I’ve done it for quite a few years,” Schack said. “I just really like to look at how much money I’ve saved. I look at what I would have spent had I not spent the time cutting out my little coupons. There’s a little bit of a thrill when you get your total and it’s $200 and by the time they’re done entering your coupons its $150. To me, it feels like you’re getting things for free.”

According to reports, extreme couponing is on the rise across the nation. Last year, the number of coupons redeemed rose 27 percent, according to Inmar Inc.,  a coupon-processing entity. While many consumers are getting their coupons off the Internet, Schack mostly clips her coupons from the Sunday paper, Parade magazine and from people she knows who don’t use coupons. She says many stores will not accept Internet coupons.

“I’ll shop at Walgreens because you can combine the Walgreens coupon with the manufacturer’s coupon,” she said. “Same thing at Target. So a lot of times you can end up getting something for hardly anything at all, sometimes free if you do that. Unless I’m running to the store to get one thing I’m out of, I always use coupons on every trip.”

Schack goes grocery shopping on Wednesdays and Saturdays at Rainbow because those are double coupon days. She estimated that she saves around $30 each trip to the grocery store.

“You can get five extra dollars off your bill then because they’ll double up five coupons up to a dollar each, but any time I’m going to the grocery store and spending more than $10 or so I tend to have a coupon,” said Schack

According to Schack, the best coupons come from General Mills because they take a long time to expire and grocery stores often do promotions that offer $10 off your grocery order if you buy five or six boxes of cereal. Brands such as Kellogg’s sometimes do promotions for free milk, if you buy a certain number of products.

“Other coupons, Proctor and Gamble, their brand saver coupons don’t usually expire for a couple of months,” said Schack. “I keep my coupons for a long time and wait for the things to go on sale.”

As far as clothing goes, Schack recommends Macy’s because they often give out 20 percent coupons if you purchase merchandise using a credit card, which can also be applied to clearance items. She also shops at Plato’s Closet, where she says she can get clothing for her teenage daughter for cheap. Schack also recommends getting coupons from restaurant.com for going out to eat or halfofftwincities.com.

“At the end of the month they discount them 70 to 80 percent,” she explained. “So you can get a $25 restaurant.com gift certificate that you can use towards a bill that’s $35 or more. And you can get that for like two dollars. For two dollars you can get $25 off your meal.”

Schack recommends finding stores that do double coupon days, in which a single coupon counts as two coupons.

“My biggest tip would probably be find out if anyone’s doing double coupons. K-Mart does them sometimes. Look for items that have been discontinued because they’re usually marked down quite a bit. Generics aren’t always least expensive. If you buy a brand name with a coupon, it ends up costing you less money.”