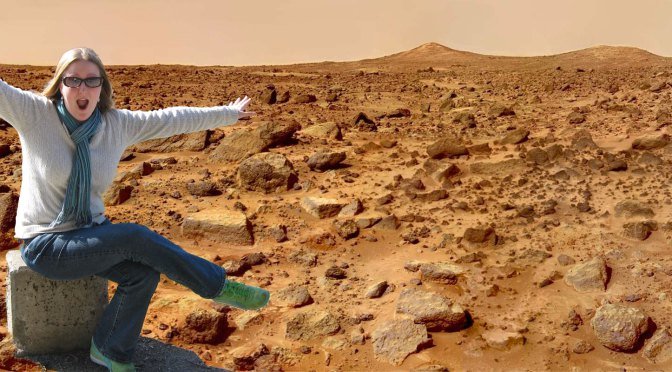 I’m not against extroverts – quite the contrary.

Yes, of course I’m an introvert and naturally I’m prone to long stretches of uncomfortable silence. That’s why I rely on the extroverts of the world – they keep the conversation going.

It’s the extroverts out of this world that may become the real problem. It seems the ebulliently sociable are on the verge of being excluded from any mission to Mars.

The tiresome effect of introverts and extroverts being in close confines for an extended period of time is a topic we have already explored here. And all indicators suggest the charm of upbeat, chatty people will wear thin during more than a half-year with nothing to comment on but the same black-and-star-speckled scenery.

When desperate to end a conversation, my fall-back is the generic “Well, I gotta go now.” But locked inside a Mars-bound capsule, there’s really nowhere else to “gotta go” to.

Even short trips can seem endless if there’s someone in the car who needs to manufacture conversation. And anyone who has tried to make small talk can recognize the peril here – in the vacuum of space there’s not much to say about the weather after you agree that you shouldn’t open a window because it sucks outside.

Rather than immediately rule out the extroverted for a Mars launch, I wonder if NASA will consider forming an all-extrovert crew. Yes it would be a talkative seven month journey, but perhaps a TV channel could arrange to broadcast the whole thing live. Some outlets don’t have exceptionally high standards – a group of people saying anything energetically is good enough for basic cable.

But here’s the other problem – what happens after arriving on Mars? Introverts will gain back their strength while quietly pondering the alien landscape, but the likelihood is high that extroverts will feel absolutely lost because there’s no one new to meet.

I’m not one to make iron-clad rules and I certainly don’t want to rob people of opportunity based on personal characteristics over which they have no control, but I wonder if space exploration will ever be a good place for extroverts. Yes, they have many positive and endearing qualities and no one can deny that extroverts are wonderful for loosening things up at a party, but as we’ve seen in countless Hollywood movies, aliens may not be open to the kind of congenial welcome we seek.

So dispatching a landing party that’s skilled in glad-handing and back-slapping could backfire in a cataclysmic way. And after all, there’s no guarantee the extraterrestrials will have backs to slap or hands to receive the gladness.

But even if alien forms of life do have these things, why would they accept our overtures? If they are extroverts they would have already come here and introduced themselves.

And if they are introverts, beware! Nothing is more unpredictable than a moody alien, and everybody knows we can come on a little strong.

What sort of road trip companion are you?