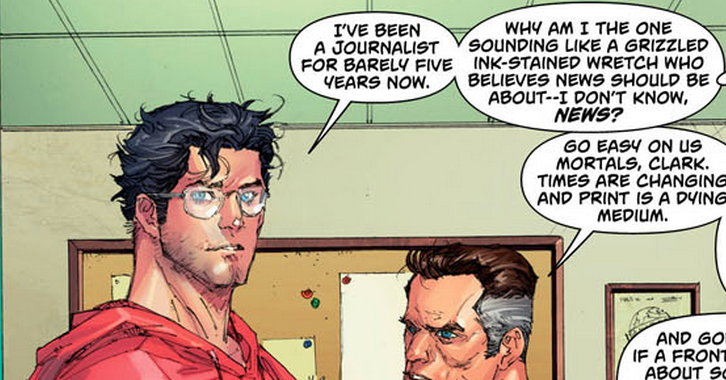 Buy October 23 edition and get the whole story — online or at your local comic store, like the Source Comics and Games in Roseville.

In this week’s Marvel Comics Superman edition, Clark Kent quit the Daily Planet. Superman writer Scott Lobdell told USA Today: “Rather than Clark be this clownish suit that Superman puts on, we’re going to really see Clark come into his own in the next few years as far as being a guy who takes to the Internet and to the airwaves and starts speaking an unvarnished truth.”

I’m a little worried about the competition, but, hey — there’s room on the internet for everybody.

And OUR Daily Planet has been online from the beginning. One difference: we have citizen journalists, not Supermen and women. We still share Clark’s passion for journalism (and maybe for truth, justice and the American way):

“The truth is that somewhere along the way, the business of news became the news. Growing up in Smallville, I believed that journalism was an ideal, as worthy and important as being a cop, a fireman — a teacher or a doctor. I was taught to believe you could use words to change the course of rivers — that even the darkest secrets would fall under the harsh light of the sun.”

Being a cop, a fireman, a teacher — that’s worthy and important? Even if you’re on the public payroll?

And “using words to change the course of rivers?” Calling Molly Priesmeyer!

The Twin Cities Daily Planet is happy to see that Clark will be joining the ranks of online journalism. If he ever gets to this pat of the universe, we hope he’ll stop in.