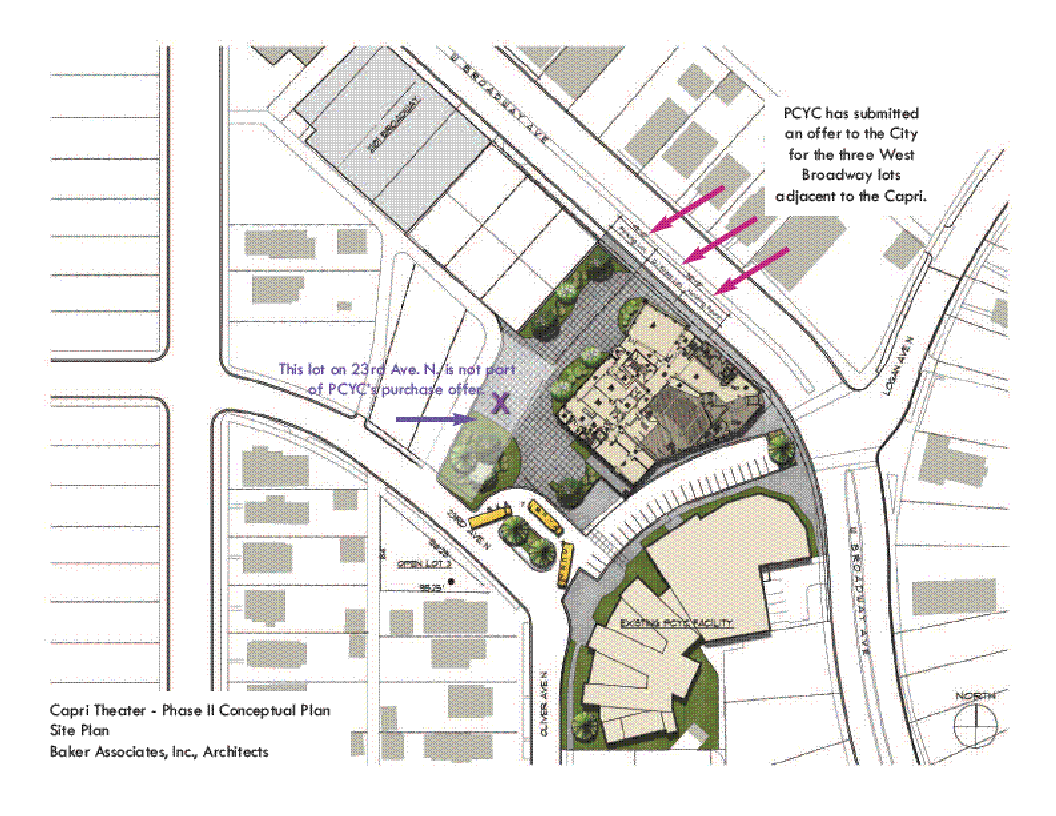 Imagine the Twin Cities’ best jazz venue, the Capri Theater, somewhat upstaged by a two-story addition that’s mostly windows, facing west. A courtyard, and then a new commercial building further west, with a sit-down restaurant a half block away. In our neighborhood.

In two separate sets of actions, the City of Minneapolis and the Capri owner, Plymouth Christian Youth Center, will likely be inching closer to that reality Dec. 12. That’s the day PCYC’s part of the deal comes before the City Council, and the day responses are due to a city request for proposals on the commercial property.

For as long as we can remember, the Capri, built in 1927 as a movie theater, has lacked safe and sanitary “green room” space in the logical places. Play productions rely on actors standing outside the building backstage or running through the audience aisles after preparing in the nearby dance room or upstairs classrooms. A basement space under the stage is off-limits, a nasty pit at the bottom of narrow stairs.

In 2009 the lobby was reclaimed for patrons (a previous remodel blocked up most of the windows and made it a music classroom). Most important for production quality, that $700,000 remodel also installed new lighting and sound systems which started attracting even more rentals. Minnesota Monthly dubbed it the “best jazz venue” as local musicians honored jazz legends in this new professional space.

At the latest Legends Series concert, PCYC executive director Anne Long announced the plans; a presentation board in the lobby showed the new space—the two story addition housing a new flexible performance space on the land that used to be Holding Forth the Word of Life. It was foreclosed, the City bought it. Two buildings, which the Capri would have expanded into, were irreparably damaged in the 2011 tornado and torn down.

The new plan, with projected cost about $5.8 million, shows new construction surrounding the old building to the west and south. Long explained it will take a couple of years to raise the funds. The city’s community development committee Nov. 19 approved selling the land for $161,650 and noted the Capri is in the “soft” stage of a capital campaign. City Council approval is the last step in the land sale, expected Dec. 12 this year.

“And we may even get a restaurant,” Long forecasted to the almost sold-out Legends house. That’s a separate deal. When 2101 West Broadway, the former Broadway Rental building and former grocery store, perished due to the tornado, it, too became blank city-owned land. There is one more parcel the city’s working on acquiring, tangential to the key parcels on what they are calling the Capri Block. The city issued a request for proposals (RFP) for a multi-story apartment building and commercial space on the first floor, “preferably including a restaurant,” according to the RFP.

The RFP asks applicants to consider how a taller building or buildings will relate to the shorter structures in the surrounding neighborhood. Rentals should be market rate, and marketed to the general public.

The RFP packet notes the other apartment buildings soon to be built on Broadway, the Penn Avenue planning process for bus rapid transit underway, and other positive indicators for successful commerce in the area. The RFP responses are due Dec. 12. It’s expected the developers will be reviewed with neighborhood organizations Feb. 14, 2014, and for the city council to choose a developer April 11, 2014.

At the other end of the block

Coincidentally, Nov. 19 the Community Development Committee approved a request to issue $1,850,000 in Tax-exempt 501(c)(3) Bank Qualified Bank Direct Minneapolis Community Development Agency Revenue Bonds, Series 2013 for Catalyst Five Points, LLC (pending full council approval). This bond issue helps refinance the debt remaining on the $2.5 million 2010 Broadway and Penn building renovation, replacing two bank loans that are coming due and resulting in a lower interest rate. Catalyst is current on its payments, and puts up equity in other buildings as part of the collateral on this financing.

Catalyst kept the first floor of the building open trying to attract a sit-down restaurant but eventually filled the building with the Northside Achievement Zone offices. Many hope that with the other developments of the last few years, including the pop-up restaurant Umami’s success and Anytime Fitness opening across the street from the Capri, that “this time’s a charm” to get the kind of restaurant theater patrons look for.