Throughout his youth, Darrail Hughes attended various Saint Paul Public Schools. Now, as an adult, he returns to give that same school district something he believes they’ve been lacking: an African American male who students can relate to as he relates to them.

“I would say something’s wrong with [traditional learning]. That’s why we are changing it,” says Hughes, believing that the current education system is getting ‘boring.’ Currently working with a division of the St. Paul Public Schools entitled Focus Beyond Traditional Services, Hughes credits his current position to his belief in the Arts Literacy Movement.

According to Hughes, the movement is “a creative substitute” for the flawed traditional learning he described as ‘boring.’ The combination of Arts Literacy mixed with a mentoring component is what Hughes believes could make the connection between African American male students and the “broken” education system.

This “broken system” is nothing new, he says. Just a few months ago, the city of St. Paul witnessed what would have been the first teacher’s strike in nearly 70 years. “No teacher really wanted to strike, from those I talked to,” says Hughes. “So you know, things must have been really getting bad to where [St. Paul] teachers are, like, we’re getting tired of it, too. We’ll go to these limits if we have to… I think it woke up the system.” 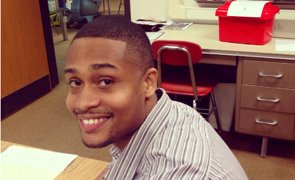 While it may have taken a strike to wake up the system, the alarm clock for Hughes (right) came from an indirect source. He has no problem admitting that in his youth he partook to a certain extent in the street life. It’s nothing that he’s proud of, but it’s also nothing he’s ashamed of and probably the reason why he can relate to the kids he works with so well.

According to Hughes, one day his older brother came home and told him that he had been robbed by some of the guys they hung with. When Hughes heard the news, he was in disbelief, and it led him to have his own wakeup call and open his eyes.

“If you can know somebody and hang with them that many years, every day and all day, and still turn around for a second and betray somebody like that, what loyalty is [there in] street life? What is that?” asks Hughes.

For him the change didn’t happen overnight; it took some time. Likewise, he understands that the school system’s change will take some time.

Accompanying his reality check came a passion for acting that reeled him in during his transformation. It is his dream to start a program where he can utilize his friends and others to branch out to different high schools and sit in classrooms all day in order to assist the teachers and support the students. At the age of 24, he knows that it’s not as easy to reach the youth after school anymore, and he feels that with a little extra community effort students can feel like more people than just their parents care about them.

As he gets closer to fulfilling his vision, Hughes may feel that he’s making a difference: “I’d say I’m making steps, and if that makes a difference along the way, then yeah, right now I would like to believe I’m making strides.” It’s his belief he won’t really know until one of his students reaches a crossroads in their life and they have to make a decision — hopefully the right one.

Khymyle Mims recently graduated from Normandale Community College and a summer journalism intern at the MSR. He welcomes reader comments to mimsk@my.normandale.edu.