What I’ll tell you at the bar: Evil Dead will thrill splatter hounds old and new, as it dishes out levels of gore unseen in theaters for some time. Don’t expect many surprises, though, as the plot never strays from the known or expected. 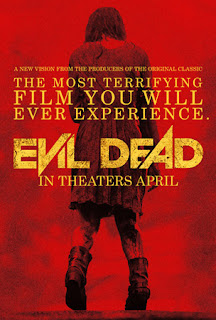 First of all, let me make it clear that this isn’t a zombie movie, okay? A long, long time ago, before the dark cloud of the undead trend swept across the suburban shopping malls and sports bars of America, there was an elite cadre of occultists who understood that walking whilst deceased was only a symptom for any number of unholy conditions, the very least of which was that of being an undead servant. To be fair, Romero himself muddied this up a bit with his kind of walking dead. With the odd exception of  films like Plan 9 From Outer Space, before Romero the walking undead were made by all manner of dark incantations and workings. They had no singular will and they were usually the tools of a profoundly dark master. Zombies were enslaved by evil masters, and corpses possessed by demonic forces were another matter entirely. The dark spirits which possess and transform the hapless living in Evil Dead are far more spirited than the shambling rot of zombies old and new.

Evil Dead is, of course, a remake of The Evil Dead (1981), the low-budget sensation which launched the careers of Sam Raimi, Bruce Campbell and may have given a boost to a young filmmaker by the name of Joel Coen. Both films concern a group of five friends who uncover an arcane leather-bound book while visiting an isolated cabin in the woods. This book, written using human blood and skin, summons a horde of demons when its contents are verbalized. The original summoning is slightly more innocent, as the voice which raises the demons is a recorded section of the cabin’s original resident reciting the satanic passages. In this updated version, a school teacher with an interest in arcana willfully reads the text out loud, despite all the bloody warnings to the contrary.

There’s more gravitas to the remake, too. While the original film fueled the emergent genre of stupid kids doing dumb things in the face of supernatural horror, this remake gives them real problems to deal with before they take on their own small squad of darkness. The group of friends isn’t there to party naked in the woods, they’re going to get David’s (Shiloh Fernandez) drug addicted sister Mia (Jane Levy) sober by turning the cabin into a rehab clinic. So when Mia starts acting possessed, her bizarre actions are seen as no more than detox side effects. I expect this is something co-writer Diablo Cody added to the project.

One by one the demons consume the visitors, leaving the others to fend them off and try to find a way to contain the evil. Unlike the original, the creatures in this version are just as content to finish off their host’s body as they are to kill the others. They just need five souls to finish the ritual, and it doesn’t matter how they get them. Because of this, the dynamic in the cabin is a little more complicated than the “Tom and Jerry” style antics of the original film. The horror is two-fold as the decision to help their friends is weighed against self-preservation. With the realization that the only way to save their friends is to destroy their bodies, Eric (Lou Taylor Pucci) and David are forced to weigh future repercussions against immediate survival. A few moments of oblique dialogue and performance are all it takes to show this, a level of performance which is higher than most of what genre films offer. This kind of subtlety was not even in the same part of the woods as the original The Evil Dead.

Overall, the performances are a cut above the standard for theatrical horror films. Relative newcomer Fede Alvarez allows the actors to invest a little more humanity into the roles, without making them bog down in dramatics which would only distract from the real tension in the story. Actors in a film like this have to walk a fine line between playing it for laughs and playing it straight; a balance that the original didn’t completely achieve, but this version gets a little closer to the right equilibrium. David scrambles to cover yet another wound with duct tape, it is supposed to be funny and is delivered as a joke.

Pure expression of unquestionable terror is another hallmark of the better fright films which preceded The Evil Dead. Those late seventies films were sold as much on the merits of the screams as the threat itself. Evil Dead carries this forward, as the horrified reaction of the trapped cabin dwellers undercuts any sense that this is being played all for laughs. There is no doubt that when the monsters come, there will be blood and no one will be unscathed. They know it, and they let the audience know it.

The Evil Dead was the standard for low-budget practical effects for some time. Not Hollywood low-budget, but DIY-make-it-in-your-basement really low-budget. Hundreds of Super-8mm and 16mm filmmakers took it as proof that you didn’t need to have Dick Smith on your crew to make a good fright flick. Sadly, most of these filmmakers also missed the other things you need to make a good film, but the doors were opened to directors who were a full decade ahead of the indie boom of the early nineties. Executive Producers Raimi, Tapert and Campbell wisely chose to honor this by avoiding CGI gore effects and going all-in for old-fashioned latex and blood tubes. While some of the innovative charm of the animated bits from The Evil Dead is missing, the no-holds barred visceral mayhem is improved by the thirty years between the films. Like an adult who finally gets to play with the toys they were denied as a child, these filmmakers had lots of fun with their grown-up budget. Fans of the original will share their maniacal glee.

The bigger budget also allows for more camera angles, more close-ups and better blocked scenes. Sam Raimi did a whole lot with not much in 1981, but modern audiences want more visual stimulation than a single roaming wide shot. Lighting for horror film has grown up too, most audiences aren’t impressed by the one or two light set-ups which Raimi and Tapert made work in the original. Cinematographer Aaron Morton benefits very much from the larger investment, and the atmospherics of the cabin is made more potent. Likewise for production design, make-up and wardrobe. You can see the effort was made to not just remake The Evil Dead, but to renovate and update it.

Some things are missing, though. The raw low-budget energy is absent, of course, but so is the sense of occult discovery which made The Evil Dead work. The “evil book” device certainly wasn’t original at the time, but it was fairly dormant. With the growth of the movies’ cult status, the nearly zombie-like interest in Cthulu, and the many imitations over the years; the Necronomicon isn’t as creepy as it once might have been. Likewise, while the possessed demons look really cool, they also look really Linda Blair-Pazuzu. This makes it pleasantly clear they are not zombies, but misses an opportunity to dazzle and shock audiences even more. For fans of the original, Evil Dead 2 and Army of Darkness, there may be few surprises and the film suffers from being too faithful to the original. Viewers new to the world of Evil Dead will likely enjoy it more.

Unfortunately, the Evil Dead soundtrack is completely overwrought. Gone is the plain but effective instrumental hints of the The Evil Dead‘s score. The soundscape of Evil Dead is unfortunately dominated by an inappropriate and ill-timed orchestral sound. Soaring strings, epic chants and driving percussion make this sound like an overblown religious horror film and not the claustrophobic trap it is meant to be. This isn’t a world-shaking battle of good vs. evil, really, it’s about trying to survive a satanic onslaught with your soul intact. Ash survived The Evil Dead by getting down, dirty and mean, there were no angels on his side. His character arc was closer to that of a noir hero, or maybe even Travis Bickle. While the arc in Evil Dead is less maniacal, it still ends in a bloody, wet, and fiery mess. Lavish and distracting music only deflates the danger and doom which circles around this cabin in the woods. Sadly, the score pushes the scale of the film’s tone closer to camp than it should be.

All but the most canonical horror fans will enjoy Evil Dead. Audiences looking for a gory thrill ride will be rewarded by everything hiding in this backwoods cabin. Those of us who were hoping for a film which would fully develop the scary parts of the franchise will have to keep looking. While the shock and tensions was ramped up for this “re-boot”, the omnipresent sense of occult prescence is mostly absent. Perhaps the filmmakers thought audiences wouldn’t buy that kind of spook story, as inundated as they are by soulless zombies and mechanistic serial killers.

There is a saying that the Devil will fool you into believing it doesn’t exist. Maybe the Devil has been too successful in this regard, maybe it is time to open that cellar door and take a long look at what waits in the lower chambers of our isolated homes. Evil Dead doesn’t make it all the way down, but it points a failing flashlight towards the bottom, shines just enough light to make you wonder if what you saw is worse than what waits unseen.