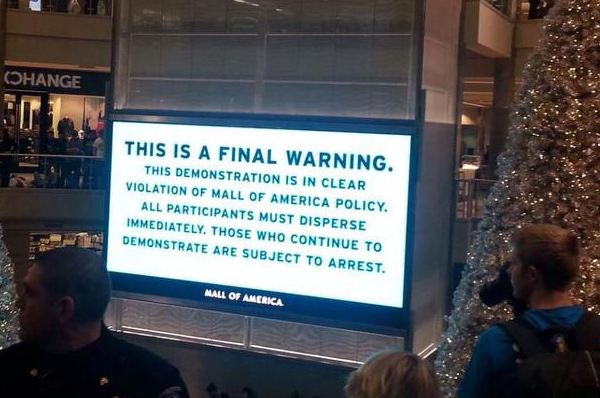 Starting this week, the ongoing trial of Black Lives Matter protestors for allegedly organizing a December demonstration at the Mall of America will place a spotlight on free speech, racial inequality, and whether or not our shopping spaces shoudl be considered public space. A few weeks ago, we chatted with Teresa Nelson, the legal director of the American Citivl Liberties Unoin, about how these issues have played out in Minnesota. In a series of ways — privatization, design, legal challenges, and policing — free speech and the public realm has been under attack in the Twin Cities. As we think about protests, demonstrations, and how to raise awareness of issues like racial inequality or police brutality, pubic space has emerged as a central issue.

We talked with Teresa Nelson and found out just where the ACLU, and the ongoing court case at the City of Bloomington, sits today.

Bill Lindeke, for the TC Daily Planet (BL):: How is the ACLU involved in the Mall of America case?

Teresa Nelson (TN:) The history is that the ACLU participated by amicus cure, a friend of the court brief, arguing that the state constitution should extend to public squares like malls.

BL:: I think I read about that case once. What was it about?

TN: Freeman Wickland was arrested for protesting fur sales outside Nortstrom, arrested for handing out leaflets. He was arrested and charged, and in the decision the District Court held that our state constitution does protect free speech at places like malls. Especially, at a place like the Mall of America, given the public money that went into building. Then the case went up on appeal, and the dist court decision was reversed, and both the district court and the Minnesota supreme court declined to extend our state constitutional speech rights to private property, such as malls.

So that’s where the law stands right now. And I’m not going to comment specifically on the current case, because we are gong to be representing some folks involved.

BL:: So what’s the ACLU’s position on what should and shoulnd’t be public space? Why is this an important issue?

TN: We need to think about how certain places are becoming the new public squares. For example, malls and other shopping spaces really need to be places that speech is allowed, because as our communities change, and we have freeways and other infrastructures like that, and as parks become more and more commercialized, places like malls really are where people go to be together. It is natural, if you want to reach people, to go to a mall as opposed to other places. And that’s what the court in the California court in the [Pruneyard Shopping Center case] recognized, where the court essentially found that malls really are public space. When you think about where to reach people, we think about malls. And especially the Mall Of America given its size and its iconic place, and they hold their selves out as serving that role.

BL:: I think more and more these days in our cities, free speech is under attack at privatized spaces. One example is the skyway system, but there are others.

TN: As they’re building the Viking’s Stadium, there’s going to be this public space as part of it. But a lot of it is going to be public space that doesn’t get to be used by the public. Control of the park goes to the stadium, and the Vikings will have specific days when they get to have complete access to this park.  Now you have the city and the park board talking about privatizing the whole thing. It’ll be really interesting to see how it plays out, but it’s another case where you have a lot more restrictions on our public spaces, and that’s a troubling trend.

There’s a case in Utah where Salt Lake City has given a big plaza to the Mormon church, and but it retained a pedestrian easement. The church was given compete authority to decide what happened on that property, and so there was a lawsuit that claimed the sidewalk was still a public sidewalk and should be treated as a traditional public forum. It was successful, and that’s the kind of thing that we see: privatizing public space.

Coupled with that, you have communities that are not using public space any more but rather going to private companies and malls to gather and for events. If you look at any mall events page, you’ll see community events that would have otherwise taken place in a public park: fundraisers, walks, things like that…

BL: : Can you tell me about this particular case, and the Black Lives Matter situation at the Mall of America? Where do we stand right now?

TN: Almost everyone who was arrested or cited or charged has had their first appearance in the case. Only one person has pled guilty. They just entered a plea, and there is still one 1st appearance coming up on march 31st Gustavo Mencilla.

After that, the next hearing is set for May 1. It’ll be a pre-trial hearing, and most of the cases are set for pre-trial on that day. Nothing’s going to happen; it’s basically scheduling.

Going from there, there will be pretrial motions and discovery issues. The discrete issues …

B: : What would the ACLU like to see happen in this situation?

TN: We absolutely think that Bloomington prosecutor should drop the cases. A lot of it seems like retribution. It seems very personal, like a vendetta for an event that really had no violence. It was a peaceful demonstration, and certainly it wasn’t more people than the mall could handle. They have had even more people gather in the rotunda for events that they’ve welcomed, and it does seem like this is political persecution for these folks,