I don’t know how to start my critique of the play “Clybourne Park,” but I want to make sure to point out that it tricks you into talking about race–and that’s a good thing. I’ve had a bit of a case of writer’s block about this review, so I borrowed a tip from a high school English teacher of mine. “When you can’t think of how to start,” she would say, “just write down ‘I don’t know how to start, but what I really want to say is…’ and then write from there. Then go back and delete the first phrase, and you have your story.” In a manner of speaking, “Clybourne Park” does just that.

The play, currently being performed at the Guthrie, tells the story of a neighborhood, through the point of view of a house, and spans multiple generations. It opens with a White family in the middle of last century, packing up and preparing for a move. Their African-American maid is, in many ways, the glue that has held this couple together through a deep personal tragedy, although she is often treated as if she would be incapable of performing the simplest tasks without being reminded by the wife to do things right.

Other friends and neighbors, and even a local pastor who acts as a confidante, are shocked to find that the house is being sold to a Black family. Fears of “white flight” and losing property value remind us of the rampant discrimination of the era. And even the most progressive viewpoints expressed still have trouble imagining Blacks and Whites shopping at the same grocery store. (We eat different food, don’tcha know? And it’s best to keep collard greens and lutefisk in separate stores. Well, it’s best to keep lutefisk separate from EVERYTHING, but that’s a different topic entirely.) Even the husband’s motives for selling to African Americans are not entirely pure or as progressive as we’d like them to be.

While poignant, the first act lulls the audience into a false sense of comfort. After all, that was generations ago and we like to tell ourselves we’ve evolved past such social ills. That comfort is stripped away in Act II, along with the features of the Mayfield-esque house that once was. The home has been abandoned for years, and now a White family wants to purchase it from its Black owners, tear it down, and build new. The proximity to downtown is repeated as a main factor in the home’s desirability. The neighborhood has been a predominantly Black neighborhood for quite some time, although the new family reminds everyone that before that it was actually a German community.

The White family moving in sees themselves as part of revitalization, while the Black couple fears that such improvements will cost the community its soul. Does any of this sound familiar to our daily lives on the northside yet?

Although the new owners claim to eschew the suburban lifestyle, their new home will be fifteen feet taller than anything else around it and begin to encroach on property setbacks that city and community guidelines prohibit. Did I just bore you with obscure housing details? Well, “Clybourne Park” manages to make that scene realistic to wonks like me without slowing its pace in the least. The new home will have a koi pond. That tells us all we need to know.

The wife of the African American couple tries to impress upon everyone the importance of this home and what it and the community have meant to her. I thought she was tiptoeing around racial issues, while my companion thought the others brought it up. In any case, once “the r word” gets brought into the conversation everything goes off the rails pretty darned fast. All it takes is one off-color racial joke to send the whole dialogue into a cascade of multiple offenses that bother everyone equally. Although given the inherent power differentials between straight, White, affluent people and, well everyone else, some are more equally offended than others.

“Clybourne Park” ends in a way that made me expect a third act that never comes. I don’t know what your lives are like, but if they’re anything like mine, they’re full of stories with multiple unresolved loose ends. So I don’t mind when a play or a movie finishes in that fashion either. The non-ending is also a perfect touch for the intended result of the play, in that it tricks the brain into wanting to talk about and digest what was just experienced. 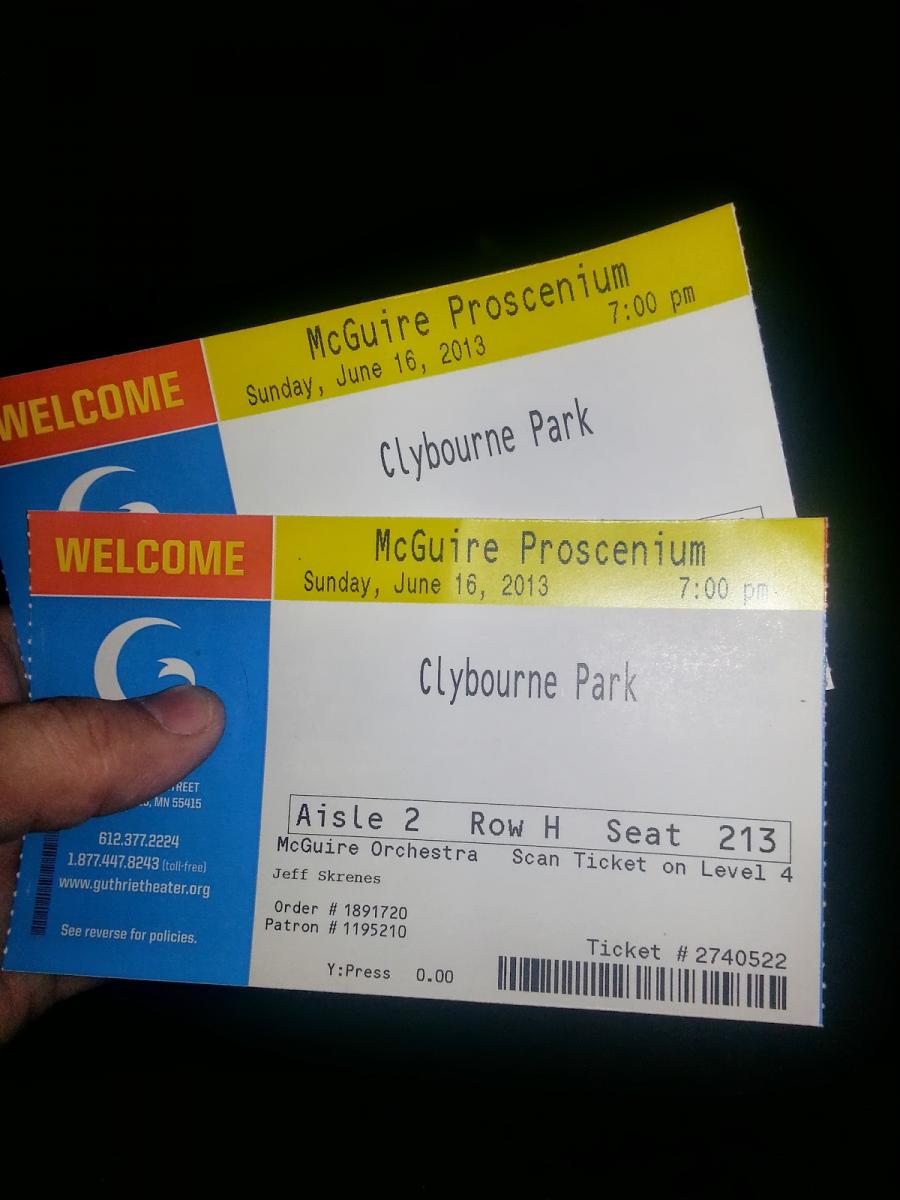 Admittedly, my companion for the evening was White as well, so who knows whether the play would have sparked a similar discussion if I saw it with someone of a different background? There certainly have been worse–and really worse–attempts though.

“I liked how the conversation was almost an exaggeration of some of the racial discussion and misfires we see on North Talk,” I said. “Are you kidding me?” was the response. “Their conversation was EXACTLY like what’s on that page. If anything, North Talk is the caricature.” From there we discussed how the White family claims not to identify with their suburban compatriots, yet their plans for a new home involve a koi pond for God’s sake, and their desires for moving into the neighborhood were not too different than our own. It gave us a fresh perspective on being viewed almost as interlopers into the community we both live in–even though like the characters in the play, we at least THINK we want to improve the neighborhood. And the area was struggling and in need of some kind of new energy. Are we bringing that new energy to an established community or simply taking it over and fooling ourselves into feeling good about it? And who benefits, exactly, anyway?

Even if our motivations are pure, how do we act in such a way that truly respects the fabric of our community? How do we affect the fundamentally imbalanced power structure that exists around us? The Act I, ’50’s-era dialogue ridicules the notion that somehow Blacks and Whites can’t even shop at the same grocery store, but if we can’t talk frankly about race today, have we really advanced much beyond that point?

The last question is where “Clybourne Park” succeeds in tricking the brain into (hopefully) a constructive discussion about race. You will leave the performance saying to each other, “It sure was hard for them to talk about race because…” And then the real dialogue begins.

THEATER REVIEW | “Clybourne Park” at the Guthrie Theater: A play about “the American dilemma” and other euphemisms (Jay Gabler, 2013)