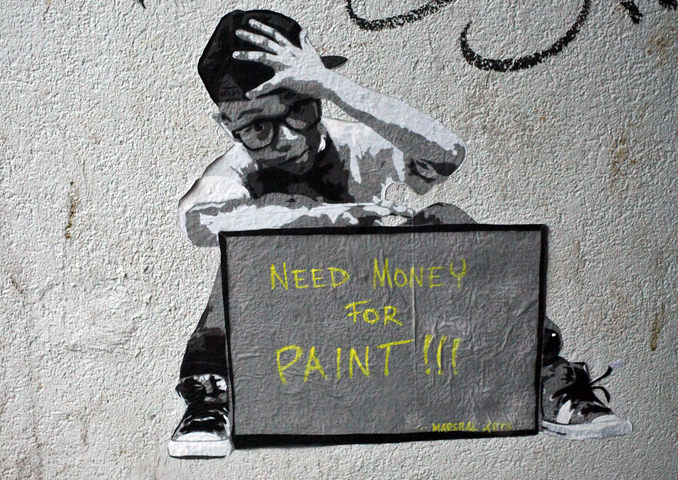 I first heard the term “sellout” while in art school during a discussion on the subject; I’m not entirely sure why we were having this discussion, but it seemed everyone was in agreement that the one thing that guaranteed sellout status was a shift in values that alienated anyone who admired you as an artist.

When someone calls an artist a sellout, what they’re actually saying is, “I’m bitter and resentful that you’re gaining success and recognition and I’m not, so I’m going to try to make you feel bad in order to make myself feel better.” One might also refer to this as bullying, but I won’t for the sake of the argument. This is the definition I have more experience with.

Remember this equation because you will need it later.

If someone has ever called me a sellout I wouldn’t know it, because they don’t have the stones to say it to my face. From the very second I knew that I could be an artist, I wanted to make money at it—because if I want to do the things I love for the rest of my life then I have to make a living doing them or else I’ll have to survive by eating oil paints. The romantic notion of the starving artist living only on his inspiration is total B.S. and is completely unrealistic; poverty does not equal purity (another equation I would like you to remember). Because of this, wanting to make money as an artist is perfectly sensible.

However, most people are well aware that art isn’t something you get into if you’re looking to strike it rich. And when someone gives me a cocky smile and says, “I’m just trying to make some money,” I understand that they have no idea that the long road they’re headed down is paved with empty pockets and penniless piggy banks. Sure, money may come somewhere down the line, but in the beginning you spend most of your time being dirt poor. The psychopath in me finds it amusing because I know that if I tell them how much work it is they probably won’t believe me. They’re the people who are the quickest to let the word “sellout” drop from their mouths.

Never let someone make you feel bad because the art world kicked their ass and you’re still standing. Standing is hard when you’re a working artist, so it’s great when someone notices and is happy to acknowledge what you do. What I don’t get is why, if art is so innate to human civilization, are we discouraged from doing it on every level? If we “fail” then we have to contend with all the alcoholic, drug-addicted stereotypes; if we “succeed,” we are made to feel like we have sold our souls for money. The fluctuation between failure and success can change within the hour, and I only feel like a success when I don’t go to bed crying about it.

So, here’s what I want you to do the next time someone tries to judge how you go about your business in this manner. You look them straight in the eye and ask them to “do it better.” Because if they could do it better, than that’s what they would be doing instead of trying to make you feel bad for what they can’t accomplish. Because ART + SUCCESS = AWESOME.