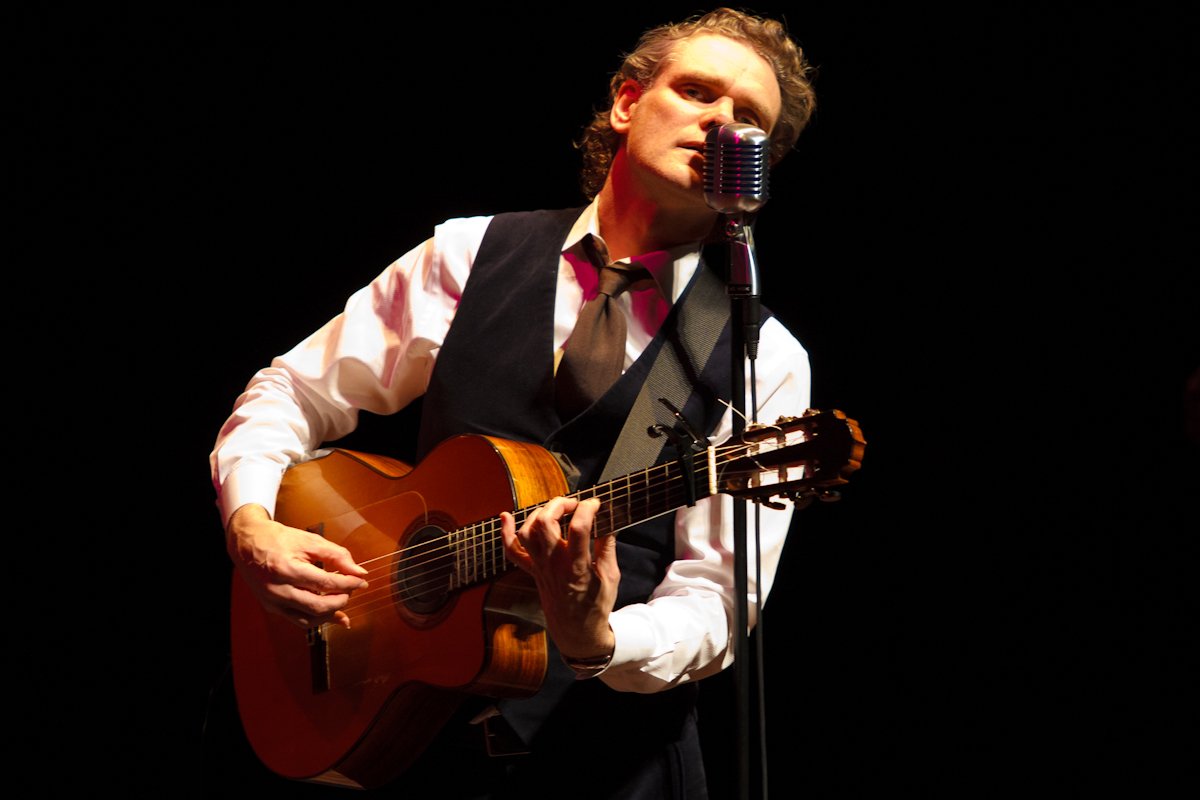 When flamenco guitarist Jesse Cook appeared on stage at the historic Pantages Theatre Saturday, May 3rd, he acted surprised at the sizable crowd as he jokingly commented, “Are you all sure you came to the right show?” Although his culturally rich blend of instrumental music is not main-stream, it is plenty well known to fans of Smooth Jazz, Nuevo Flamenco and World music. It can be challenging for a band with no singer to keep an audience interested, however Cook has cleverly crafted an entertaining live show to combat that. One of the key components is his cast of versatile players who switch off between multiple instruments interacting with each other at different parts of the stage, clearly having fun as they feed of each other’s creativity. It’s infectious!

The performance began with percussion driven melodies that inspired the listeners to clap along creating a mood that would in Cook’s master plan ultimately build into what he refers to as a Rumba Party. Switching things up early, the band sat in chairs at the edge of the stage and performed in a more acoustic style that enabled them to connect with the people in the front rows. The song “Baghdad” was a standout with a full sound that filled the room perfectly. The mix was dialed in just right so you could hear the snap of nylon strings as Cook and Nicholas Hernandez dueled back and forth trading lighting fast licks. The star performance on the tune came from Chris Church as his phrasing on the violin really delivered a middle-eastern feel. Church charmed an accordion on another crowd favorite “Bogota by Bus” as he joined Hernandez on his riser and traded spirited solos. Percussionist Art Avalos wore a large silver drum and had a tambourine strapped to his leg to accomplish his sound on “Incantation”, which concluded the first set and featured Church on possibly his most challenging instrument of the night, an Armenian Duduk flute.

After giving each player a chance to shine during the first set, Cook took back the reigns and began the second part of the evening on his own. He skillfully built a song and played over the top using looping technology artfully hidden on stage in an old travel suitcase. Hernandez returned to demonstrate his mastery with some beautiful chording as Cook effortlessly laid down a melody over the top showing how in-synch the two are from 11 years of performing together. Many of the evenings best moments were the result of their interaction. Slowing things down one last time, Cook played “Fields of Blue” one of the prettiest melodies of the evening from his current release he describes as a collection of melancholy tunes, “The Blue Sessions.” It was all fun from there on out as Cook finally got his Rumba Party. The crowd rose to their feet as the band cycled through several tracks that had people clapping and dancing in the aisles. The crowd was feeling it and encouraged the band back for a multi-song encore performance that included their cover of “Cecilia,” which has become a fan favorite. It all made for a fun, classy and culturally rich night of worthwhile entertainment that should ensure we will see Jesse Cook back in Minneapolis on his next tour.