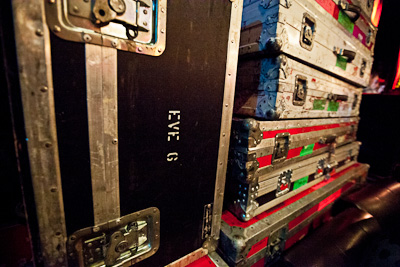 The crowd at the Varsity on Thursday, May 24 looked young, almost too young to have been Eve 6 fans before the band broke up in 2004. That only made them more excited about their first chance to see the band in person.

Seattle’s Fall From Grace did everything they needed to do to successfully open the show. They sweated all over the stage, and they got the crowd dancing to unfamiliar music. The task was all the more impressive because their nicely complicated music isn’t easy to dance to. It’s strong and energetic, but the rhythms and tempo change frequently throughout a song. That requires a dedicated crowd, and the band had that after just a song or two.

Fall From Grace was tight and professional. Three guitars, a bass, and drums were always together with no visible effort. Lead singer Tryg Littlefield pulled the tidiest maneuver I’ve ever seen to get his beer bottle out of the way (and into his back pocket) when it was time to play. They were having a party on stage, and they made it very inviting for us to join them.

Then it was time. The curtain came up, the audience cheered…and we waited a few more minutes. Eve 6’s stage presence, and particularly Max Collins’, was not your standard rock star fare. Collins came across as an overgrown geeky kid trying to keep up with his own racing thoughts. Jon Siebels was about as mellow as they come as he moved around the stage.

Still, it somehow all worked. Awkward turned into endearing. When Collins asked the crowd to be vulnerable and give into the slight cheesiness of “Here’s to the Night,” they did, happily. When he told people to pogo during “Tongue Tied” (but not until the right part of the song, because no one wanted to be the only person pogoing) even those of us who think pogoing is an abomination went along for the ride.

The music itself was the strongest part of the show. With four diverse albums under their belt, Eve 6 had plenty of great songs to choose from. They went well beyond the singles even for their older albums and never pulled out a dud. They mixed things up, rearranging “Amphetamines” as a slower song. Collins played “At Least We’re Dreaming” as a solo on acoustic guitar. Still, the singles were played straight, much to the delight of the audience.

Eve 6 really came alive when they played tunes off their new album, Speak in Code. Some of that was an effect of the music itself, which is more dance-oriented than their prior work. Some of it, though, seemed to be sheer excitement over the new material. Tony Fagenson wasn’t content to sit behind his drums and keep the songs moving. He had to dance while he was doing it. Even Siebels was downright animated.

The new material kept the audience moving too. From “Situation Infatuation” to “B.F.G.F.” (Best Friend’s Girlfriend) to “Victoria,” the crowd was dancing (not pogoing). Even those guys in the crowd who were almost too cool to be there gave in now and again.

If there was one complaint to be had about the evening, it’s that it was too short. Don’t get me wrong. Eve 6 didn’t short the audience on music. It just went by all too quickly. Hopefully they’ll record another album and be back soon.