The Star Tribune is seriously misleading people when they credit Chief Dolan with the drop in crime rate.

“With little doubt, the key accomplishment of Dolan’s years has been the steady drop in the crime rate.”

What would be better measures of a police chiefs performance?

1) Arrest rates – where the arrests are upheld in court as having a good case.

The calculations, based on MN BCA 2005 and 2010 Uniform Crime Reports: 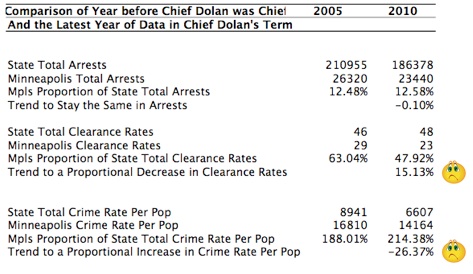 2) Clearance rates – where cases are solved or cleared not merely shelved. 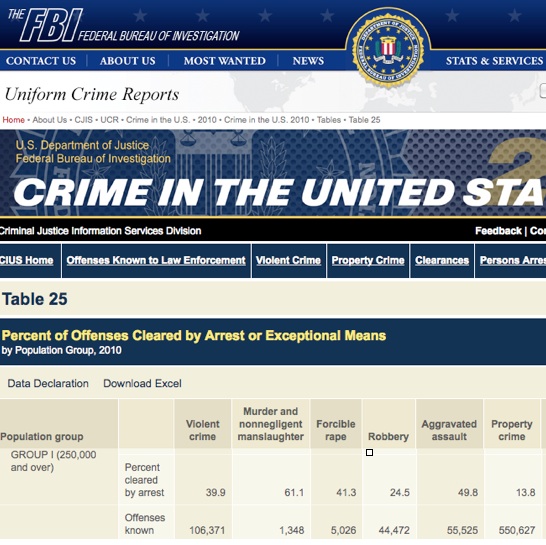 Grade: Poorer than Average Big Cities and the State

3) Misconduct rates – where we count all the instances of police conduct.

A high rating in this category is bad. The National Police Misconduct Statistics and Reporting Project ranks Minneapolis as fourth in misconduct rates for police agencies of a similar size in 2010. Minneapolis is even the ranked higher than the notorious Oakland who almost killed a protestor with its misuse of force. One might argue the details, like maybe the incidents are really not that bad. So here is the listing of what the project collected in just 2010. 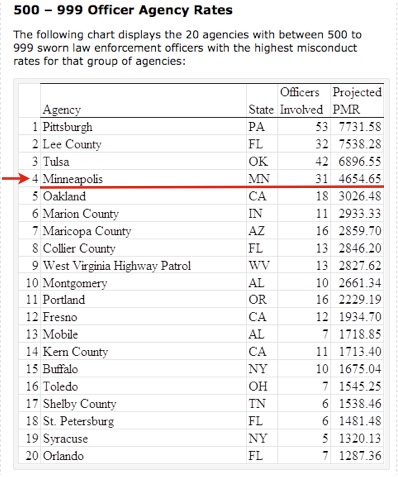 Grade: Horrible, only three cities of the same type are worst.

4) Attitudes of community policing not military policing – where the police have respect for community, where neither victims nor arrestees complain of harsh treatment and where there are few civil lawsuits.

Derryl Jenkins ended up beaten and bloodied after a traffic stop in North Minneapolis almost two years ago, when he peaceably complied with officers. Luckily it was captured by the dash video cam. The City of Minneapolis paid $235,000 in a settlement. Yet what was clear to the public was not so clear to Lt Mike Sauro, 4th Precinct, who still said :

“As a supervisor at the 4th Pct. I am writing this in response to the request that supervisors discuss use of force with officers under their command, I will start this discussion by telling you that I have worked for the MPD for thirty five years and have attended many, many training sessions on force and been involved in many, many use of force incidents…If the suspect does not produce his drivers license when requested he than dictates that force be used, not the officer….In ending I will repeat that the Jenkins’s arrest incident is a classic applied use of force by highly trained professional police officers”

No one has kept score on the numbers or amounts of civil lawsuits, which is too bad. For if we kept score, then maybe we would have more cause to change the Minneapolis police force. Under Tim Dolan, Minneapolis has paid 1.8 million dollars in lawsuits in just a couple of years.

Legendarily, this police force has beaten up the victim (not the attacker) who called for help.

Grade: Horrible, the police consider us all to be bad people.

Here are some changes that need to happen beyond the police chief:

The real question is – does this matter enough to you to make it an issue in every city election? Only if you demand change, will change happen. Do you have to wait until a family member or friend is a victim of Minneapolis policing before you act or can you act now?