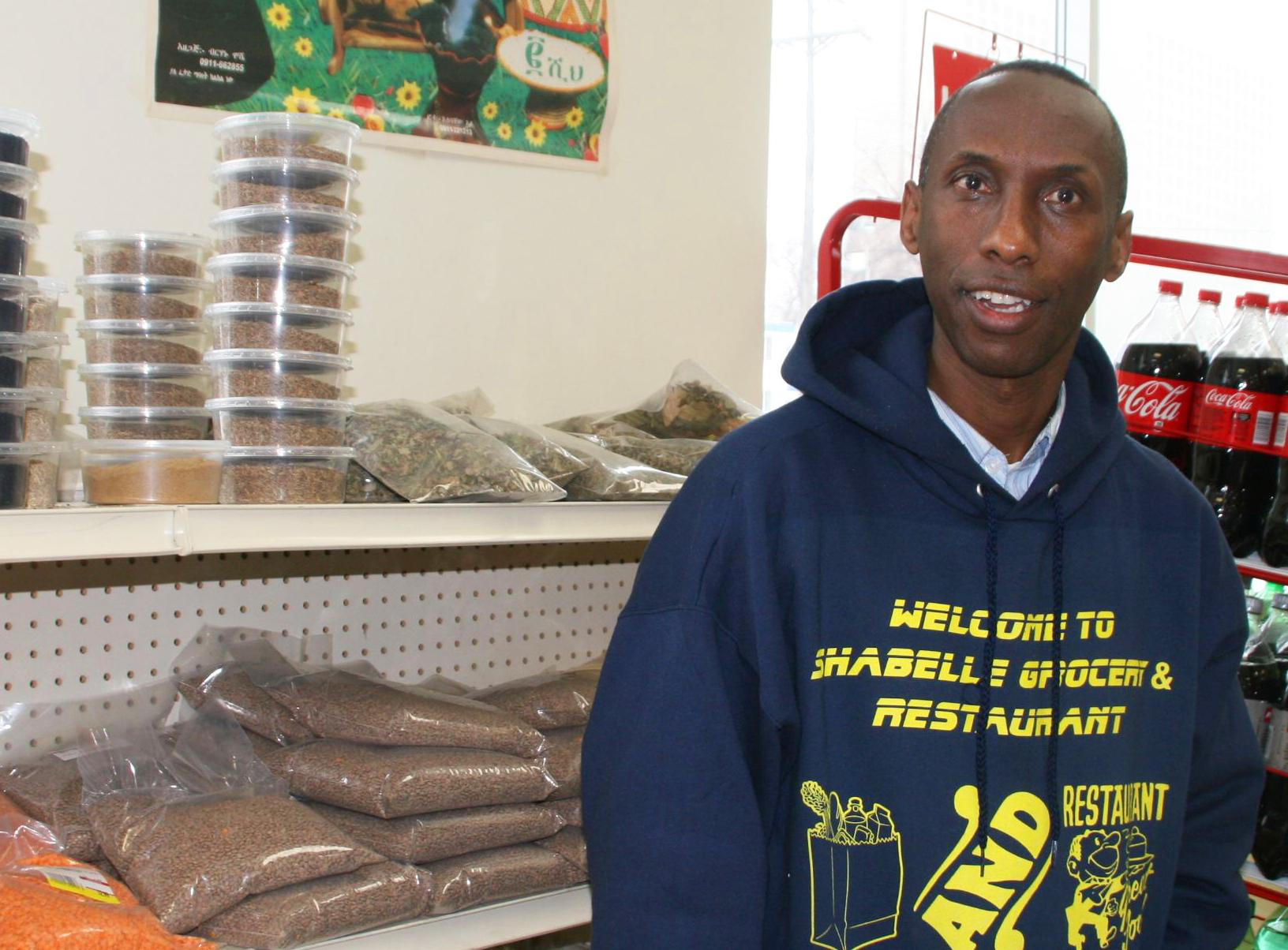 Abdur Omer, co-owner of Shabelle, the little Ethiopian grocery store and restaurant on Franklin Avenue, opened his store 13 years ago after moving to Minnesota to be near friends. He first moved to Washington, D.C. from Ethiopia in the 1980s and it was there, just a couple of years before he arrived, where I first became aware of Ethiopian cuisine. The city’s many Ethiopian restaurants were popular with the many Ethiopian cab drivers, and although I was only an Iowan cabdriver, I’d grab the same take-out as my fellow cabbies, nibbling on dinner as I trolled for fares. I loved the fragrant stews and the bread it was served on. They were unlike any cuisine I’d tried.

Omer is still passionate about the food of his home country. Since the store opened, he’s been helping customers find what they need, especially those who don’t know their kitfo from their gomen or their teff from their millet. Confused by dozens of spices lined up on the far wall, the foods with with unusual names, the brightly colored powders packaged in plain plastic wrappers with no explanation or directions? Just ask Omer. He’s here to help.

On the recent day when I visited Shabelle, Abdur steered customer Ismael Yusuf away from the packets of orange colored powder called shiro (a chickpea flour) advising him instead to buy the white shiro.

The orange powder is the spicy version, made into a dish of the same name, a kind of gravy into which injera (more on that later) is dipped. It’s good stuff, says Yusuf. “You chop up onions and fry them and add the shiro and water.” He likes the hot version, he says, but the shiro he’s buying today is for his child. “Kids don’t like hot food,” he tells me. “But, I like spicy. I crave spicy and I’ve got to have it. Sometimes I just say to myself, I want something spicy hot, something that burns my mouth.” 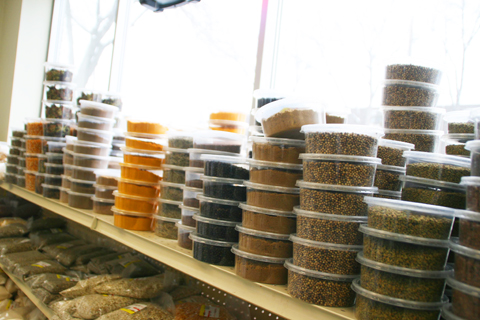 If you’re looking for spicy and authentic, start with Ethiopia’s favorite spice, berbere (the word means “hot” in Amharic), a brightly colored chili powder-like mix of various hot peppers, garlic, ginger, basil, rue, allspice, cloves, black pepper and other spices. Berbere is a key ingredient in many dishes, both meat and vegetarian. Every cook, it seems, has his or her own version. 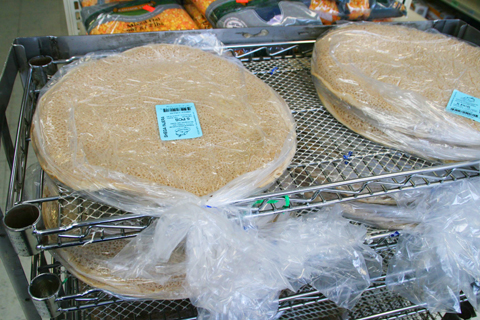 Teff is one of the most popular grains, used primarily to make injera, the sensual fermented batter-bread that acts as plate and utensil for Ethiopian stews. It’s for sale in 25-pound bags. But, injera recipes are byzantine. You need a starter. The batter needs to ferment for several days. During fermentation, a mold forms (not dangerous but it affects the texture) which needs to be removed. There’s more. So, why not buy it ready-made from Shabelle’s injera racks, cooked up fresh daily at Shega Foods right down the street?

Coffee is one of the chief exports of Ethiopia and has deep cultural connections. Local legends say it originated there. The ornate Ethiopian coffee ceremony (called Bunna by Ethiopians) is a way to honor friends or show respect. Shabelle sells the green coffee beans, the roasters and grinders, the tiny cups, and the black pitcher-like coffee server used in the ceremony. 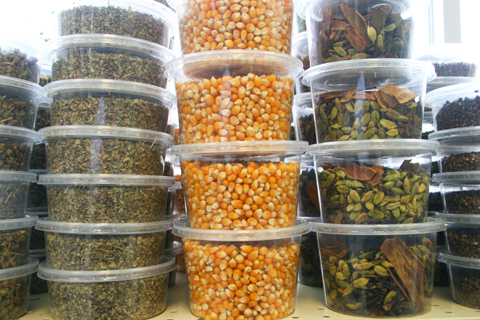 “In Ethiopia,” says Omer, “coffee beans are for people who can afford it.” For those who can’t, or perhaps, for those who have a taste for a milder beverage, Omer recommends coffee shells (hashara) and coffee leaf (kuti) to make what’s essentially a coffee tea. It’s very mild, like Minnesotan church-basement coffee. “We let nothing go to waste,” he says.

He also sells popcorn to eat with coffee. “Popcorn is international,” he claims. If you’d rather not drink coffee, ask him to show you what you need to brew your own T’ej, a kind of honey-based beer that’s popular in Ethiopia. 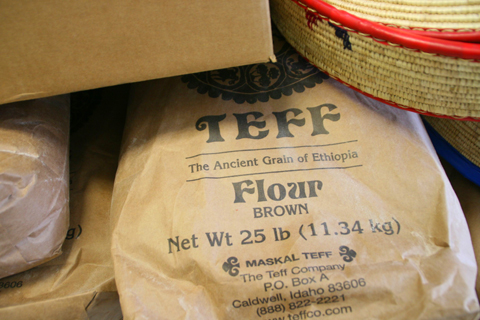 There are other products that make a special trip to Shabelle worth the time. Bukri’s brand sauces (key kulet, alecha kulet, pasta sauce, and Ethiopian salsa) are perfect if you want to add an Ethiopian flavor to a meal. And, there’s locally made Lucy’s Hot Sauce in an eight-ounce squeeze bottle. Its inventor, known as Ambo, says his sauce came in second in a hot sauce contest in Texas. I believe it. It’s richly flavored, earthy, and not too hot. Each bottle has a batch number written on it, by hand (mine is 10013) and the slogan “It is not just any hot sauce, it has health benefits.” For now Lucy’s Hot Sauce is available only locally, in small stores like Shabelle.

If you want to try some of these unique dishes before you try to cook them, order something from the small restaurant attached to the store. “In Ethiopia,” says Omer, “there used to be a cultural taboo on women eating alone at restaurants—but that’s changed. Women have jobs, there’s a new living standard. And, here in America, it’s not a problem. Everyone is welcome here.”