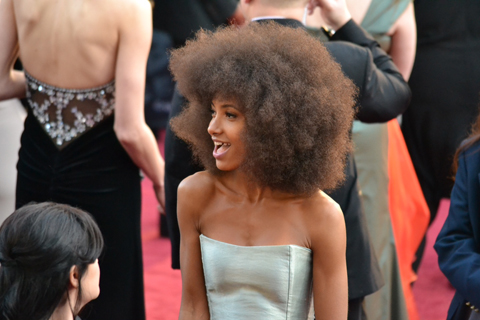 Esperanza Spalding at the 2012 Academy Awards. Photo by Jamie Millard.

“Hey, are you gonna go see Esperanza Spalding?”, Bobbi Miller asked me with considerably more than idle curiosity. All I knew about anyone or anything named Spalding was the company that made baseball gloves. So, no, I hadn’t any such intention. Miller, though, herself a marvelous vocalist, was brightly animated in anticipation of catching the concert, attesting that this Spalding woman can sing her hind parts off. Well, if said so by Bobbi Miller it was good enough for me. Accordingly, I made plans to see Spalding on September 30 at the State Theatre in downtown Minneapolis.

Turned out to be something of a mixed blessing, but one that, bottom line, I do not regret. The show start out on a gimmicky note, which I never particualry appreciate. If you’re there to make music, make music, not some quirky statement. The evening billed as Esperanza Spalding’s Music Radio Society, about a dozen instrumentalists took the stage that featured a prop on it, a huge (cardboard, I guess) boom box. The lights went to black. And stayed there. Too long. Then, there was a fake radio broadcast, complete with the sound of a dial switching from station to station. This also went on too long. At last, the lights came back up and the band began playing avant-garde jazz. After another drawn-out delay, Esperanza Spalding, a pretty, tiny little thing wearing an Angela Davis afro, strolled in from the wings sporting a Fender bass, plucking at the strings, nodding to the upbeat, and took center stage.

Not only don’t I like gimmicks, ain’t especially fond of showboats. So the night was not exactly off to the best of starts. To make matters worse, the sound of Spalding’s bass was buried in the mix. Unless she’s wearing the thing as an accessory, that is not the most effective means of putting her talent across. I had to do some deductive reasoning. Before the lights had gone down, spied a few impressive folk in the crowd. Monster bassist Yohannes Tona was there. As was, if I’m not mistaken, pianist Nachito Herrera. So was the spoken-word frontman for Junkyard Empire. Hell, had reliable word that His Royal Purpleness was backstage and, well, Prince don’t come out to see hardly nobody. It stood to reason that gimmick or no gimmick, buried bass or not, this lady could cut it.

Sure enugh, the minute she opened her mouth all doubt was dispelled. Miller had called it: Spalding is steeped in traditional jazz—including some sweet scatting—with a flawless ear for freewheeling, not so traditional improv. Hers is one of those rare voices that hops up and down the scale, unpredictably landing here and there with one thing you can count on: incredible quality.

She does not, however, know when to keep her mouth shut. Spalding really needs to leave witty repartee to those who do it well. For that matter, she doesn’t even do a decent public service announcement. She tried doing a bit about a former lover who has found a new flame and it fell flat on its face. She detracted from a fine number—for which she was joined on vocals by a remarkable Philip Bailey soundalike—by interjecting a line of pretentious pap about ancestors and self-worth. Not that ancestors and self-worth don’t merit mentioning. They do, however, call for wording of at least minimal skill. Toward the end, there was a cut dedicated to a man who spent 30 years locked up for a crime he didn’t commit. Bad as you have to feel for him, by this time, my prevailing wish was that’s Spalding would just shut up and sing. And play. For some reason, each time she switched from bass guitar to an acoustic stand-up, the sound on her playing distinctly improved. Clarifying that, while she’ll never eclipse Charles Mingus, she definitely has chops.

Not for nothing. I’d love to know what rocket scientist, seeing as how the the Hennepin Theatre Trust runs four Minneapolis venues, didn’t book this artist into the Pantages Theater, a house affording such intimacy as is called for to showcase jazz—in the Twin Cities, anyway, where that genre isn’t a big ticket.

Highlights were a weird, wonderful rendition of Stevie Wonder’s “Heaven In Your Eyes,” the gorgeous original “Cinnamon Tree,” and the title cut from her first album Endangered Species (one has to highly recommend, even without hearing, both that and the new joint, Radio Music Society). And stage presence. She is, bopping about, working the bass and killing at the mic, a fascinating image. Think adorable. Halle Berry transformed as a pixie with a thousand-watt smile. Who sings and plays bass like nobody’s business.

Okay. Yours truly now knows a new reference for the name Spalding.