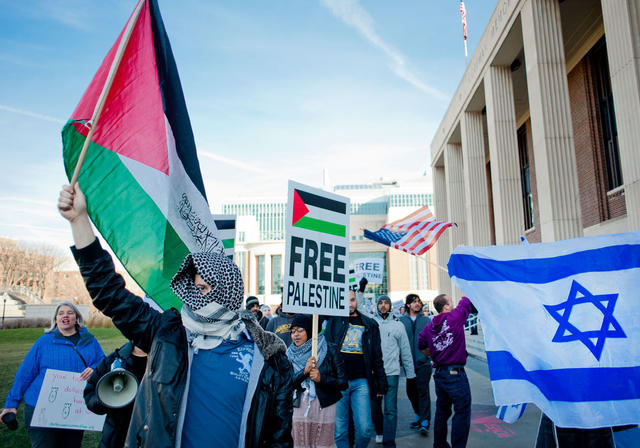 Physiology freshman Ashraf Abuhadid and other pro-Palestinian protesters march past a contingent of pro-Israel demonstrators Friday in front of Coffman Union. (Photos by Mark Vancleave)

Amid violence in the Middle East, pro-Palestinian and Israeli groups held demonstrations in front of Coffman Memorial Union Friday — at one point nearing confrontation.

The event, held by Students for Justice in Palestine, was an emergency demonstration in response to Israel’s military action in the Gaza Strip.

The large group, equipped with flags and signs, marched around the mall chanting “Palestine will be free.”

Students supporting Israel assembled in response to the pro-Palestinian demonstration. They waved American flags and sang “The Star Spangled Banner” to emphasize the historical bond between Israel and the United States.

Global studies junior Natalie Miller said she came to support the pro-Palestinian group because she is tired of the United States supporting Israel.

“I’m here because as a U.S. citizen my tax dollars are being spent on killing innocent civilians in Gaza,” she said. “I feel a moral imperative to take a stand.”

Metropolitan State University professor Manuel Barrera said he came to the rally to support the students rallying against Israel.

“The people of Gaza have done nothing but try to maintain their dignity and to stay in control of whatever little land they’ve been ceded by the thugs of Israel,” Barrera said.

Kinesiology sophomore Ilan Sinelnikov is from Israel, and waved an American flag while rallying the pro-Israel group. He said Hamas is the problem keeping peace negotiations from happening between Palestinians and Israelis.

“[Hamas’] charter says they’re going to destroy Israel,” Sinelnikov said. “When you have a government that will and kill its own people just for its agenda, that’s a problem.

Political science senior David Axelrod, an officer for Students Supporting Israel, said he came to the rally to speak against the idea that Israelis are killing Palestinians for no reason.

“We’re here to show that Israelis want peace, regardless of what’s going on,” Axelrod said. “We’ve made numerous gestures towards peace.”

Despite wishes for peace, the event nearly escalated into violence when the groups were in close proximity chanting at each other in front of Coffman. Demonstrators were inches away from each other at one point.

Mechanical engineering senior Omar Alamy, who’s on the Muslim Student Association board, had a mega-phone and diffused the situation by telling the crowd to separate.

Alamy said he thought the event was successful in raising awareness for what’s going on in the Middle East.

“That’s our main point [to raise awareness], just to get it out there,” he said.

Pro-Palestinian and pro-Israeli demonstrators rally Friday afternoon in front of Coffman Union. The event was organized by Students for Justice in Palestine in response to Israeli military action in the Gaza Strip, which itself prompted a counter-protest by Students Supporting Israel.