The majority of Americans will be people of color by 2040, according to Policy Link’s brand-new National Equity Atlas. Through interactive maps, figures and charts, the Atlas illustrates the country’s current and projected racial demographics, and inequalities. But most importantly, this new online tool reveals the economic benefits of including diverse populations in the labor market. Minnesota, and the nation, cannot afford their exclusion.

Visitors to the National Equity Atlas website can browse data at a national, state, or regional level in a matter of clicks. The data for Minnesota, and the Minneapolis-St. Paul-Bloomington MN-WI metro area mirrors national trends. By 2040, 28.3 percent of Minnesotans will be people of color, including 33.6 percent of the Twin Cities region. (In contrast, the white population has just a 1.6 percent growth rate.)

So where will all these people work? In Minnesota, over fifty percent of jobs will require an AA degree or higher in less than ten years. But just twenty five percent of blacks attained those qualifications in 2012. 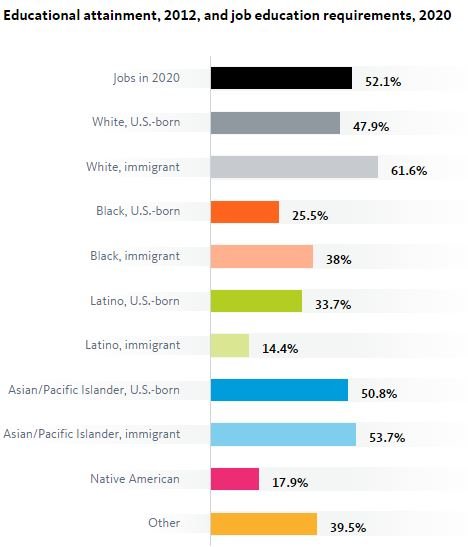 These gaps can be seen in income levels as well. Minnesota workers of color earn $5-$7 less than the average wage for white workers. This data paints a stark picture of individual inequality, but the National Equity Atlas reminds us of the larger economic consequences as well. The racial gap in income prevented Minnesota’s economy from increasing by 17 billion dollars.

While drastic, the National Equity Atlas’s projections come as no surprise to Growth & Justice. We know that the best way for Minnesota’s economy to grow is by purposely including all people. Aligning workforce training, job development, and racial equity will produce a competitive and inclusive economy. Please visit the National Equity Atlas yourself and let their superior graphics speak for themselves. And then, join Growth & Justice in speaking for racial equity in our wages, workforce development, and hiring practices.