Much as Minneapolis has turned back to the Mississippi River, different cities and groups are turning back towards Minnehaha Creek, gathering up land that would have fallen prey to developers. I’ve had a fantasy that a new regional park could be cobbled together from this patchwork to make the first regional park in the inner ring suburbs out of open space along the Minnehaha Creek in Hopkins, St. Louis Park and a tiny piece of Edina. All strung through the future light rail transit (LRT) corridor near two stations with the greatest potential for transit-oriented development (TOD) of what’s currently light industrial land. My imaginary regional park would also involve linking the trails being built by—and proposed by—various governmental agencies.

Having a regional park like this one would increase the desirability of the TOD development anticipated to appear around the Blake Station and the Louisiana Avenue Station. Having a recreational park three blocks from Edina’s Grandview district could support the proposals for an urban-like village there. Wishful thinking, maybe.

We might call it the Meadowbrook Marshes Regional Park (or the Impossible Park?). Realization of such a park would require coordination from various government agencies, including the Minneapolis Parks and Recreation Board, Three Rivers Park District,Minnehaha Creek Watershed District (MCWD), Hennepin County, Metropolitan Council,City of Hopkins, City of Edina, and City of St. Louis Park. I wouldn’t be surprised if I missed other federal or state agencies who advocate and offer funding for trails and parks. This wouldn’t need to be a single park; an archipelago of adjacent but directly connected parks and trails would be just about perfect. 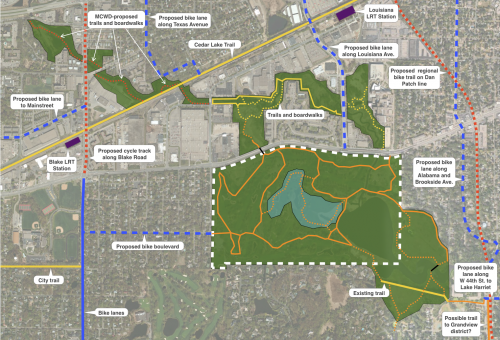 Notes about the map

All blue lines and dotted lines are proposed bike lanes from bike plan documents of the cities of Hopkins and St. Louis Park [SLP link to .pdf]. 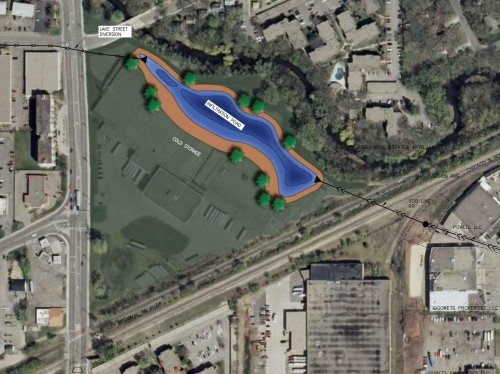 My hope is that the Minneapolis Parks and Recreation Board would willingly part with the Meadowbrook Golf Course intact and not sell it in pieces for development—with the flood damage of the past year shutting the course down for nearly the entire year. Public courses are also expensive to maintain and can be a drain to finances as the popularity of golf declines. The Park Board hired a consultant recently to come up with ideas to return the city golf courses to profitability. 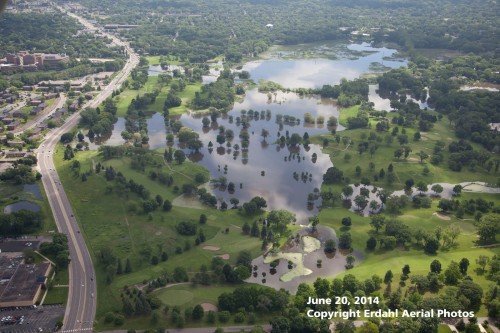 The Minnehaha Creek Watershed District would continue its acquisition of land as fits the MCWD’s mission to improve the quality of the creek, like its Reach 20 rehabilitation. The cities of Hopkins, Edina, and St. Louis Park could cobble together their patches of open space along the creek and stitch them into a singular cohesive preserve. The MCWD deserves great praise for acquiring the land, funding the remeandering of the creek, and installing the trails and boardwalks along the creek north of the golf course. The string of green space north of the creek wouldn’t be coming together without their push. Cleaning up Lake Hiawatha downstream led to all this upstream here being set aside. 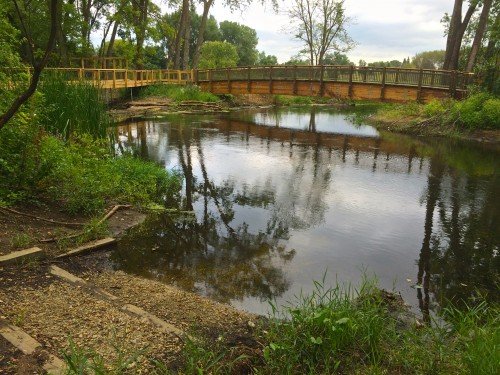 The Metropolitan Council has a role in the metro area helping regional park agencies acquire land, as well as disbursing state funds for some of the costs of operations and maintenance, and could apply funds to something like this. Maybe it involves the Metropolitan Council paying the Minneapolis Park Board a nominal amount for the developable land of the golf course.

Three Rivers would have primary park operations as I imagine this park being added to its constellation of regional parks. New boardwalks and trails would be constructed to run around the Meadowbrook Lake as have been done along the creek north of Excelsior. Just scanning the list of usual activities sponsored at the Three Rivers parks I can see biking, disc golf, off-leash dog parks and dog trails, hiking, mountain biking, nature education, paddling, picnic areas, play areas, cross-country skiing, sledding, and snow shoeing all operating in this space. I spent many winters of my childhood sledding and cross country skiing Meadowbrook’s slopes.

Hennepin County’s bike plan [link to .pdf] has proposed bike accommodations along West 44th Street from Lake Harriet to Brookside Avenue through Minneapolis to Edina. I would love to see it connected across the existing park trail into the proposed boardwalk ring around the lake, then run to the future bike boulevard in Interlachan Park. I’ve sketched out some helpful examples of how some trails and boardwalks could be built through the open space of the park, plus there are some opportunities to link the southeast portion with Edina’s Grandview area. But for some slight zig-zagging, the bike route would follow the historic Lake Harriet to Hopkins streetcar line! The Hennepin County and St. Louis Park bike plans have a proposed regional bike trail replacing the freight railroad on the Dan Patch line.

Some of the Challenges

The Minneapolis Parks Board “granting” land it owns to another park board feels like a high burden. Even though operating the course in this golfing slump is a financial drain, they might not be pleased to jettison this extremely prime real estate along the creek. The course also abuts the Interlachan Park and Rolling Green neighborhoods, two of the most “exclusive” neighborhoods in Edina. Selling this land to developers could earn a nice one-time windfall. Both the cities of Hopkins and St. Louis Park would conceivably welcome the added tax revenue development would bring.

Three Rivers may not wish to operate any part of this, whether it becomes a single regional park or a chain of adjacent parks run by different agencies. Three Rivers has some trails running through the inner suburbs (like right through this proposed park), but they don’t have any recreational park land there. Just because there is a gap in their coverage doesn’t mean it fits their budget to expand this way.

The Minnehaha Creek Watershed District has been accumulating open space along the creek for improving the creek water quality because this stretch of the creek has had some of the most impaired waters entering their watershed. This part of the creek functioned as an industrial storm sewer for decades. Now they are re-meandering the creek back to its original winding flow. Returning Meadowbrook Lake to its original marshy expanse would need their involvement which would likely impact them financially. Another agency involved with restoring urban water flows and habitats might also contribute. Besides, you don’t just flood a golf course and call it done while it washes downstream. Reverting a golf course that has been fertilized for years into a part of a riparian ecosystem needs to be done cleanly.

It would be nice to have all this park space contiguous under one umbrella. However, some of the area is already claimed by different cities that may not wish to part with their park space, no matter how underutilized. I included the space that is becoming Cottageville Park in Hopkins because it fills in a link in the chain of green space along the creek. Hopkins is in the process of redeveloping Cottageville Park and would be unwilling to part with it. Though the MCWD is picking up a huge part of the redevelopment cost since the plans involve an underground filter for stormwater serving 22 acres, this will be a city park operated by Hopkins. Again, nice to have a singular agency over all the space, but not necessary if all well linked.

The small portion of the Meadowbrook Lake marshes that crosses into Edina are necessary to build the trail to the West 44th Street bike lanes, and it is very possible the Edina neighborhoods would push back hard against creating these connections. Edina residents have shown hesitance, for instance, while discussing plans for the Edina segments of the Nine Mile Creek Regional Trail.

The founders of Minneapolis understood this concept early and built one of the best park systems in North America. The Metropolitan Council’s 2040 plan includes Hopkins and St. Louis Park as part of the “Urban Core.” This could be a perfect convergence of opportunities to create a new regional park in the “urban core” near two future TOD areas at stations along the SWLRT–heck, Wooddale Station is extremely close, too.

I figure if enough eyes see the potential here…maybe it could happen?