In today’s high-tech, hustle and bustle society, it is hard to imagine anyone taking the time to consider the impact their lifestyles have on the planet we all live on. It is even less likely for those in challenging economic situations, who spend most of their time dealing with immediate burdens such as making sure their family has enough food to eat and the rent is paid, to take a moment and think about how their decisions on what to eat and how they live affect the earth. 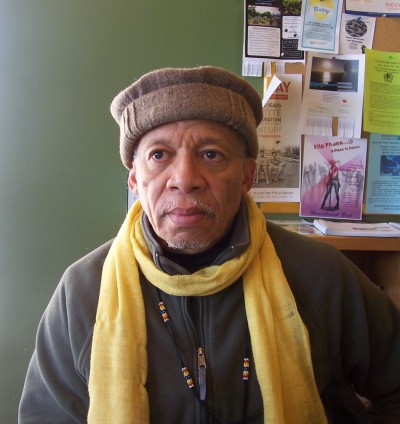 According to Louis Alemayehu and the philosophy of the organization Environmental Justice Advocates of Minnesota (EJAM), more effort should be put into preserving the earth. Its is important that people start to make themselves more aware of how decisions — such as how energy is produced, the types of food we purchase and consume, what materials are used to build homes, and the contents of cleaning supplies — impacts the health of the environment and its inhabitants.

Right: Louis Alemayehu is a community organizer for EJAM (Photo by Jamal Denman)

Local people of color who were heavily involved in the environmental movement came together in 2002 to assess the impact their work was having on communities of color. “As we looked at the situation [concerning environmental issues] that was going on in the world and going on locally, there was this acknowledgement that our work hasn’t been as powerful as it could be because of the whole strategy of divide and conquer. And we realized that if we were going to [be] effective in our environmental work, in terms of preserving Mother Earth and leaving something of value to our children, grandchildren, and whomever comes after, that we needed to figure out how to work together,” Alemayehu recalls.

With the support of the Headwaters Fund, Alemayehu and his fellow environmentalists began to meet with each other on a regular basis to talk strategy and exchange ideas. One of the ideas that came out of those meetings was an event called Earth Summit: The Making of Family, which was a day-long conference held at Metropolitan State University.

Alemayehu says that the event was rewarding in many ways, but there was also “some tension and conflict amongst some of the people who were sitting around the table together.” The conflicts came as no surprise; in fact, they were expected, and something the collective intended to address.

After the conference, and in response to the conflict, Alemayehu says the group “left with the question of: What does environmental justice organizing look like in our respective communities?” In an effort to develop an answer, they began to invite each other to get involved with one another’s organizations. They were also inviting each other to sit on the boards of their respective organizations, and the more experienced activists were mentoring younger, less experienced activists.

“Today, you would find that there are a number of us that are a part of multiple organizations of color… We’re sitting on boards of communities that are not our primary community. And the result of that was that our work kind of stepped up to another level,” says Alemayehu.

The increased interaction among them led to new organizations being formed and relationships being built. It was during a Minneapolis Urban League meeting in 2003 focused on health disparities in communities of color when the idea of EJAM was born.

The meeting is described in an EJAM brochure as “the foundation for a coalition of community members and organizations coming together to focus on environmental justice and health disparities.” Keith Ellison, who at the time was a member of the Minnesota House of Representatives, is described by Alemayehu as being the “catalyst for” EJAM. “Some of us gave support to him because we saw that there would be some value to having a person like him in a higher office.”

The initial focus of EJAM was on getting legislation passed that had an impact on mercury emissions and coal-fired power plants, areas in which they had some success in. Alemayehu says that the organization has evolved since then, and still continues to do so to this day.

“We’ve been trying to evolve into a group that really listens to people and community. [We want EJAM to be an organization that not only] shares information with them; but also helps them voice their concerns around how the environment affects their health, [and] how we can also produce jobs that — in response to the environmental crisis — also employs us where we live,” Alemayehu explains.

“If we want to have any chance of being successful [in] reclaiming our lives, we actually have to reclaim our cultures. Basically we come from cultures that figured out how to live in harmony with the environment; how to respect the water, how to respect the soil, the vegetation, [and] the animals. Our ancestors realized it was a living system, and that if we didn’t respect all the parts of the system, it would negatively impact us. The western world is just beginning to figure that out, or relearn it again.

“I look at this environmental movement as actually reclamation of our cultures, our traditional cultures. Not that we’re going to go back to exactly how we lived, but there’s a whole lot of cultural wisdom that comes out of that, that can be combined with contemporary realities and necessities,” offers Alemayehu.

Alemayehu feels that a new culture needs to be created, one that “is in harmony with the environment. The most effective solution is likely to come from utilizing the wisdom of all cultures, something EJAM can take advantage of since the organization is comprised of “an incredible intersection amongst a lot of people [from] different cultural backgrounds.”

To get involved with EJAM or to get more information about environmental justice or tips on what you can do to help create a healthier environment; visit the EJAM website at www.ejam.org, call 651-260-9787 or email mneumann@ejam.org.

From the Minnesota Spokesman-Recorder: Welcome, MSR readers, to a new section you will see appear regularly in these pages, something we call Green2Green. Most of you by now have heard of the green movement to clean up our planet, stop the waste of precious natural resources, and get climate change under control. What is not always clear is just what this movement means to each one of us in our everyday lives. Nor is it always clear how this movement includes environmental justice issues of particular concern to communities of color. And finally, it is not always clear how the green movement can also save us green, as in Benjamin green, and is creating new opportunities for productive careers. We hope to clarify much of this for our readers in the stories that will appear in Green2Green in the months ahead. So slip on your green-tinted glasses and learn what this movement means to you and your family today as we make the world safe and healthy for the generations of tomorrow.