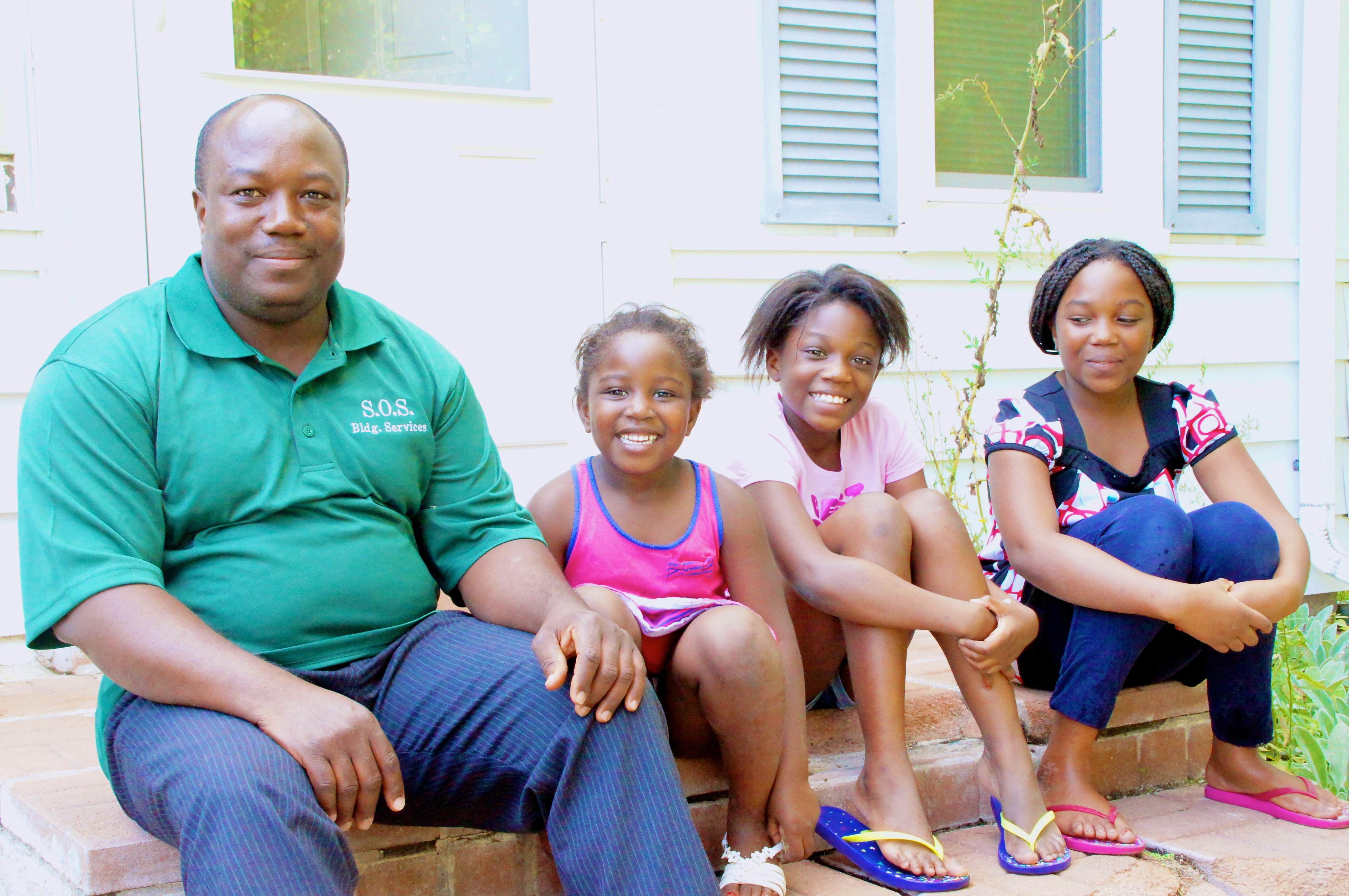 Frank Dogbe and his daughters Joyce, Christa and Stella at their North Minneapolis home

Dogbe, founder and owner of SOS Cleaning, a business that cleans commercial and office buildings, hires immigrants fresh from Africa and gives them one year to show him that they’re well on their way to learning English or that they’re working toward their GED.

“I want them to be inspired by my journey. I say to them: ‘I started out like you when I came to this country, even worse. I didn’t have someone who spoke my language and was there to push me.’”

Dogbe is from Togo, a long, narrow country on the bottom side of Western Africa. There are far fewer Togolese than Somalis or Ethiopians who have settled in Minnesota, but those who have surely have heard of Dogbe. In addition to hiring and mentoring new arrivals, he is president of the American Togolese Community in the state.

Dogbe arrived in the U.S. with a green card and a fervent desire to stay. His first job was on the cleaning team at the St. Louis Park Target in 1999. He knew that hard work, an education, and English fluency were the best places to start on that goal. He joined the local chapter of Toastmasters International, where he learned to speak in front of people and get feedback on his grammar and syntax. Later, he got his Master’s degree in accounting from Metro State.

“I had a goal. I wanted to own my own business.”

In the actual running of a business, things are rarely simple. Dogbe started SOS in 2009. Five years later, business was booming, but some of the new accounts were huge buildings – more than 100,000 square feet, and he needed to get a loan for bigger, more powerful equipment to keep up. Dogbe approached his local US Bank, but his poor credit rating made a loan impossible. Though their hands were tied, the banker knew Dogbe was a credible candidate and so made a call to Neighborhood Development Center’s Director of Lending, Brian Singer.

In partnership with the Black Chamber of Commerce, NDC was able to offer Frank Dogbe a $25,000 loan to purchase equipment, and later another $20,000 for working capital and payroll. His NDC loan officer Perla Mayo says he’s ahead of schedule on his payments and his credit score has improved considerably.

Dogbe and SOS Cleaning were the perfect candidates to receive assistance from NDC’s newly launched Business Expansion Program— an initiative to expand its business assistance services, including loan capital offerings to better meet the particular needs of existing businesses poised for growth.

Business has been very good. Working mostly in the Minneapolis Uptown area, glowing word of mouth references have kept him busy and allowed him to hire more employees. NDC’s Business Lab is in the process of providing him with a new logo and website and advice on how to attract and manage more business opportunities.

Sitting behind his desk, monitoring three computers at his home in North Minneapolis, Dogbe manages the SOS payroll, pays invoices and oversees his 24 employees. But when a hire is just starting out, or there’s a new building to clean, Dogbe is there— collecting trash, vacuuming, cleaning toilets— alongside his staff, and speaking English.

“I work to motivate them. By working hard and doing it right, we have a job. If we don’t do it right, we don’t work. It’s simple,” he said.

Neighborhood Development Center is a nonprofit organization that believes in the power drive and daring of local entrepreneurs to transform lives and revitalize neighborhoods. In its 21-year history, NDC has provided business training to more than 4,500 potential entrepreneurs and nearly 500 loans totaling more than $10 million in financing. For more information: call 651-291-2480 or www.NDC-mn.org.