Logo on the side of a maroon and orange Milwaukee passenger train. Photos by Bill Huntzicker.

Steve Sandberg, who used to follow his grandfather to work at the Milwaukee Railroad roundhouse in South Minneapolis, today supervises his own train and crew on a 1944 steam locomotive he helped to rebuild over the past four years.

Sandberg also rode in diesel locomotives with his grandfather who worked at the roundhouse from 1917 until it closed in 1970. The Milwaukee Railway yard was near Hiawatha Avenue and Lake Street where Target and Cub stores stand today.

As a child, Sandberg admits, he never had a toy train.

The engine, Milwaukee Road No. 261, was built for the Chicago, Milwaukee, St. Paul and Pacific Railroad during World War II by the American Locomotive Company in Schenectady, N.Y. 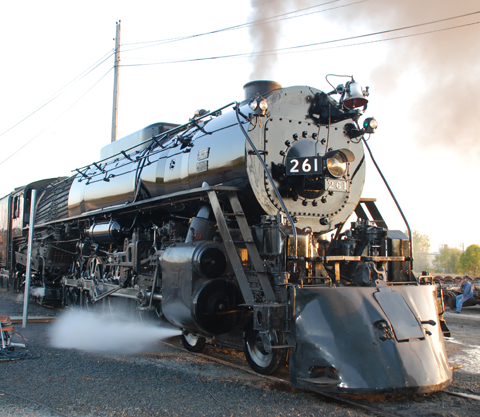 Engine No. 261 was retired in 1954 after diesels had replaced steam engines. The locomotive went into a Green Bay museum, received a second life as an excursion train in 1993, and will embark on another new life again in May 2013 after a four-year complete restoration in a train shed in Northeast Minneapolis.

And last September, Steve Sandberg rolled out the locomotive he rebuilt with the help of 1,000 volunteers and donors and $1 million in contributions. Sandberg, the chief operating officer of the nonprofit Friends of the 261, estimated that about 30,000 volunteers hours were involved. 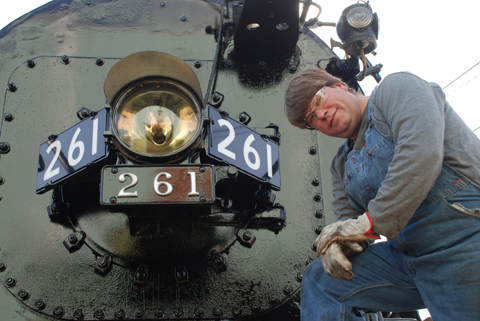 “This engine is so modern and so new, coming at the end of World War II—but it also represents the history of steam,” Sandberg said in July 2012 as he prepared it for a federal inspection. “This represents the best of two worlds: the tradition of steam and modern technology.”

The 1940s design makes the locomotive compatible with modern trains, while giving a nostalgic experience to passengers. It pulls vintage Milwaukee Railroad passenger cars that have also been updated for use on Amtrak trains and tracks. 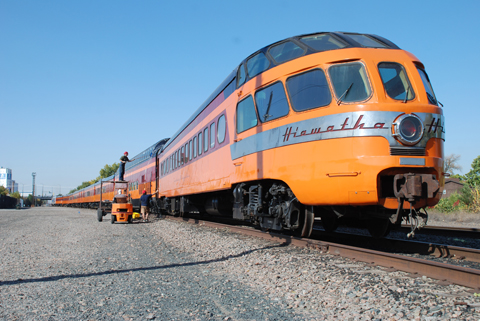 “This is a club,” Sandberg said. “The train is a novelty for the neighbors.” He accurately predicted that the engine would be running in time for annual excursion last fall but not yet ready to pull the train.

While No. 261 was being rebuilt over the past four years, Amtrak supplied engines for the railroad group’s annual excursions. Attendance on the annual excursion along the Mississippi River to La Crosse to see fall colors in 2012, for example, exceeded Sandberg’s expectation of about 750 passengers in the classic cars pulled behind two Amtrak engines.

While the excursion was gone on September 29, several people spent about 15 hours working with the steam engine, beginning at 6 a.m. before taking it out of the shed about 6:30 a.m. On that day, Sandburg drove the nearly completed No. 261 outside the shed for the first time since September 2008.

The engine was outside only twice in the interim when cranes lifted it from the wheels and then a second time when the wheels were reinstalled.

Removing the wheels and axles was a huge project.

“Two wheels, the axle, and a bearing box together weigh 18,000 pounds,” said Brent Amsden, a machinist (below). One semi-truck was required to haul each pair of wheels weighing 12,000 pounds to Chattanooga, Tenn., for maintenance grinding and smoothing, he said. 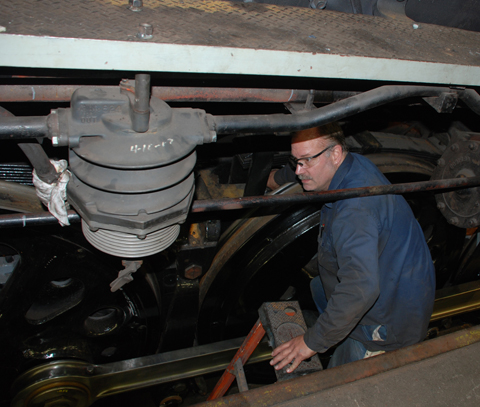 Many of the volunteers who rebuilt and maintain the train are railroad men and retired railroad men.

Don Crimmin, from Chicago, who has been a volunteer since 1996, is a retired trainmaster who worked in a Chicago yard for 30 years. When he works here, he stays with a friend in a railroad parlor car on a siding in St. Paul.

By contrast, Ed Selinsky, a mechanic for the 261, is a retired choir director from a church in Green Bay, Wis. He worked for the Chicago Northwestern Railroad five summers while going to college, and his father had worked for the railroad in Wisconsin. (Below, Ed Selinsky inspects staybolts around the firebox before the cover went on the engine. Note the two types of fiberglass insulation behind him between the engine cover and the boiler. Originally, asbestos was used for insulation.) 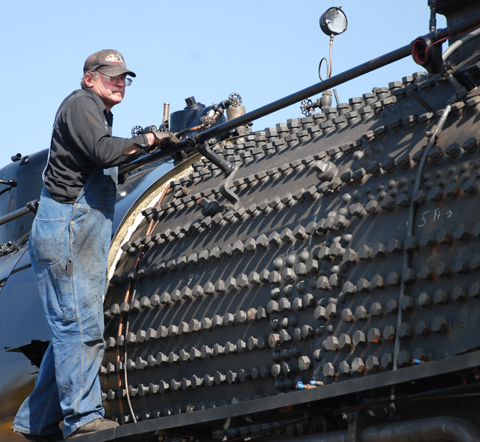 Most volunteers are from the Midwest, including Wisconsin, Minnesota and Illinois—mainly places served by the Milwaukee Road—but some members are from England, Japan, Germany, and Australia, Sandberg said.

About a half dozen men worked on the engine last July 25 to prepare a boiler test for a federal railroad inspector coming the following day. Their dedication was tested as the late-afternoon heat reached almost 90 degrees outside with 60 percent humidity. To create the required 250 pounds of pressure, the firebox had to reach 406 degrees, said machinist Tim O’Neill, a retired earthmoving equipment operator.

Volunteer Tom Ambrose, a retired Northwest Airline pilot, worked at a variety of tasks during the restoration. (Below, Tom Ambrose poses inside the smoke box at the front of the engine, showing the openings through which the crew had begun threading 255 pipes in March 2012.) 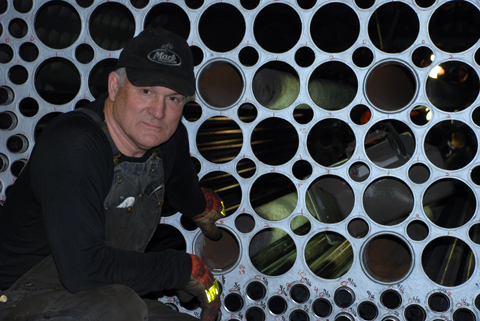 With the engine apart, he helped install the 255 tubes that carry hot gasses from the firebox through the boiler to heat the water that becomes the steam with enough pressure to move the huge pistons that move the wheels, Ambrose explained.

The horizontal pipes carry hot gasses back and forth through the entire length of the boiler to maximize the exposed surface area to heat the water. 58 large tubes and 197 smaller ones maximize the surface area in which the water is exposed to the hot metal heated with gasses from the firebox.

O’Neill, a machinist working on March 23, said that four one-inch pipes run back and forth through the flues to increase the heat and pressure to a level called superheat with pressure at 321 psi. All these pipes running through the water-filled 20-foot boiler create a heating surface of 1,438 square feet, according to the 261 website.

A pipe from the boiler transfers steam to a valve above a large horizontal piston on each side of the train in front of the wheels. The valve pushes steam into the front of the piston pushing it back as a connecting rod turns the wheel. At the end of the “push and pull” cycle, the valve pushes steam into the other side of the piston forcing it forward, pulling the connecting rods to complete the wheels’ rotation. 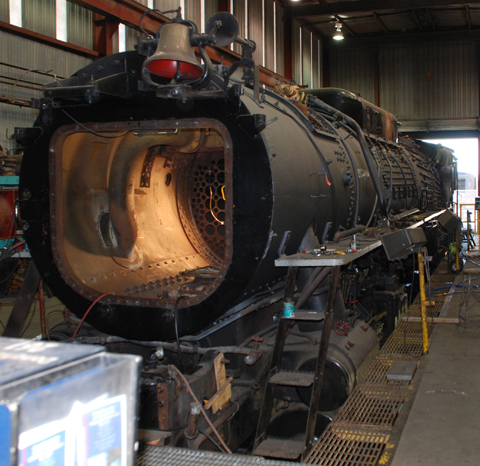 As fireman with Sandberg as engineer in September, Ambrose shoveled coal into the firebox. Normally, the fireman controls valves that regulate the coal from a stoker or conveyor that feeds coal to the firebox from the tender, the black car that carries both coal and water to power the locomotive.

About 3,400 staybolts separate the firebox from the outside cover of the locomotive. “Every one of them had to be checked and replaced if needed,” O’Neill said. The bolts provide space for water to circulate around the firebox and stabilize the exterior of the firebox so that it doesn’t collapse from heat and pressure. 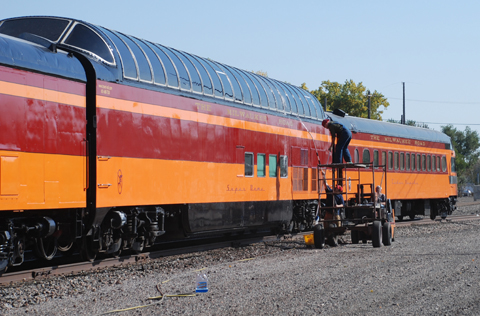 Besides coal and water, sand is also necessary to operative the locomotive. A sandbox on top of the locomotive feeds sand through tubes that spray it into the place where the wheels connect with the track when necessary for traction.

Sandberg, 47, was 23 years old when he started working on Milwaukee Road No. 261. Now he is part of a small paid staff, working mostly spring, summer and fall.

“This current restoration project has been full time for two years, after which it will be maintenance,” he said. He will then work on other projects like restoring railroad cars.

But, he said, Friends of the 261 has to pay certified, licensed machinists and welders for some projects.

He said the BNSF railroad also helps by contributing money, renting the yard, and allowing them to use the tracks. “BNSF has been very supportive. They’re interested in their history,” Sandberg said.

Most of the support comes through the non-profit Friends of the 261, also called Railroading Heritage of Midwest America.

Sandberg’s father and grandfather, both named Frank Sandberg, helped restore the streetcar line that runs between Lake Harriet and Lake Calhoun in Minneapolis. For the 261, Frank Sandberg Jr. designed and built a wheel press large enough to pry the main driving wheels from the axle to allow workmen to check the wheel bearings. The custom-made press was necessary because the design is different from other locomotives.

Steve Sandberg said he was impressed at the size by the massive roller bearings that were still in good condition. 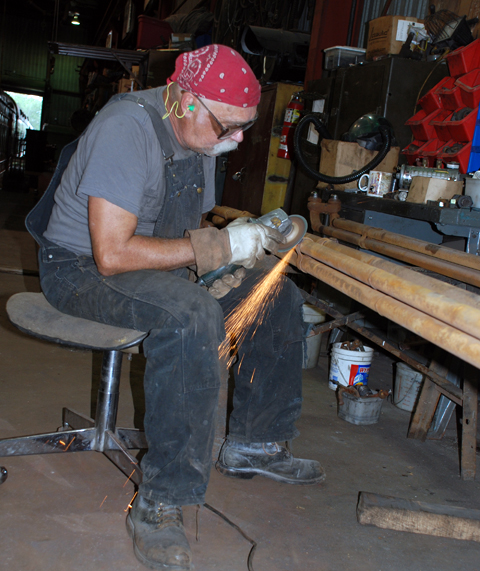 Sandberg considers his train “a traveling exhibit—like a moving museum. The idea behind it is that we can show people some history. We’ve been to Montana, Kansas, North Dakota, South Dakota, Missouri, New York and Pennsylvania. It’s traveled all over the country to festivals and educational experiences.”

Sandberg also says their presence in Northeast Minneapolis helps the neighborhood. “We’re a community,” he said. “We have an audience—kids, neighbors who stop by. We talk about safety and we’ve spent 15 years in this building that would have been an abandoned railroad yard.” They also contribute excursion tickets to charities for fundraising efforts.

New neighbors are sometimes surprised to see the smoke from the old coal-fired engine and call the fire department. Firefighters are compelled to respond and showed up twice on one July day.

The website www.261.com has galleries showing many scenic photos of the locomotive and the process of lifting the train off its wheels for restoration. A menu item called “stats and roster” lists many of the restored cars and illustrates their colorful histories.

One of the most interesting cars is the Cedar Rapids, which has a glass-covered dome for the rear of the train. It was built by the Milwaukee in its own shops in 1948 for the Hiawatha passenger train between Chicago and Minneapolis. It was retired in 1970, rebuilt in 1984 for use until 1990. Friends of the 261 acquired it in 1998 and returned it to service.

A signature Milwaukee passenger car was the car-length dome. The Friends has a Super Dome built by Pullman Standard in 1952 for the Milwaukee, sold to the Canadian National in 1964, sold to Chicago & North Western Railway in 1986 and named the Powder River. It went to North Carolina in 1996 and Friends of 261 acquired it in 2005 and remodeled it in 2010. 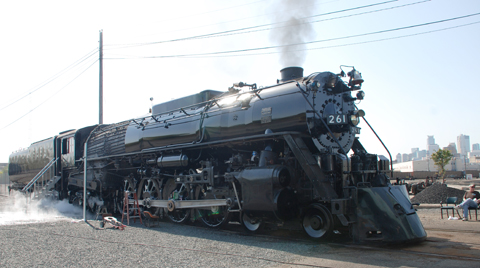 “Instead of a bottle of champagne, we will christen the engine with a bottle of water from Minnehaha Falls—a 100-year Milwaukee Road tradition,” Sandberg said.

The first steam excursion in four years will travel to Duluth to celebrate National Railroad Day on May 11, 2013. Travelers will visit the Lake Superior Railroad Museum in Duluth and leave Duluth at noon Sunday, May 12. The National Train Day is the first Saturday after May 10, the anniversary of the golden spike marking completion of the first transcontinental railroad in 1869.

The Duluth trip has sold out, but additional cars may be added.

Another excursion will visit National Restaurant Show May 17-19, 2013, in Chicago. Round trip is cost is $349. A third excursion is planned for July 2-7 to Whitefish, Mont., near Glacier Park. Excursion information and reservations are available at http://261.com/excursions/.

Correction: When initially published, this story featured a misspelling of Don Crimmin’s surname. The error has been corrected.