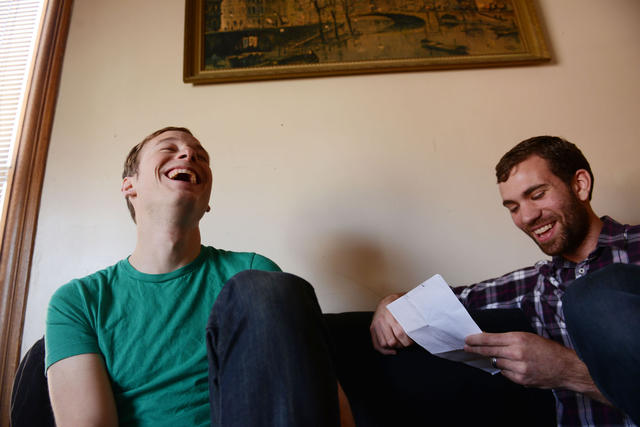 Biology senior Zach Flessert, right, reads the speech he wrote to his fiance, civil engineering senior Scott Miller, the day he proposed. The couple met their freshman year in a physics class and eventually learned they lived in Middlebrook together. They began dating soon after. (Photo by Amanda Snyder)

Nearly 40 years ago, two men, one a University of Minnesota law student, became the first to petition the U.S. Supreme Court that they had a constitutional right to marry.

Twenty years ago, graffiti painted on the Washington Avenue Bridge read “Faggots Die,” and students were frequently harassed for their sexual orientation.

Today, acceptance is higher on campus and nationally, and engaged seniors Zach Flessert and Scott Miller are more accepted now than they would’ve been decades ago.

They’ve been dating since freshman year, when they met in a physics class. After they graduate, they plan to have a small wedding ceremony and a big party.

But amid all the wedding planning, one question remains: whether their marriage will be recognized by law.

The clock is ticking for the same-sex marriage bills to clear at the state Capitol, and a final vote could happen as soon as this week.

That year, law student Jack Baker and his partner, Michael McConnell, tried to get a marriage license at the Hennepin County Courthouse in Minneapolis.

When denied, the couple took their case to the courts, culminating with the U.S. Supreme Court refusing to give it a hearing, saying it was a state issue.

Now the high court is tackling the issue with cases surrounding the Defense of Marriage Act and California’s Proposition 8 decades after the Minnesota couple made the country’s first same-sex marriage request.

The national attention surrounding the couple, whose request seemed radical at the time, caused the University’s Board of Regents to renege a job offer for McConnell at the St. Paul campus library.

Although it started out shaky, acceptance of same-sex couples is now higher than ever, and the push for recognizing same-sex marriages in Minnesota is strong.

Nearly two decades ago, an undergraduate’s dorm room door was spit on and damaged because of her pro-gay stickers, posters and magazine clippings.

A woman felt like she needed to lie about her sexual activity to physicians at Boynton Health Service’s Women’s Clinic because they assumed she was heterosexual.

A student veteran compared the University’s acceptance of gay people to the Navy. The University, they wrote, “doesn’t seem to be a whole lot different for me.”

In 1993, the Select Committee on Lesbian, Gay, and Bisexual Concerns published a report — “Breaking the Silence” — that outlined the University’s attitude toward non-heterosexual lifestyles. It was nearly 20 years after activists like Baker and McConnell fought for similar efforts.

Baker, who was student body president while attending the University, said in a 1972 article that the school wasn’t completely accepting but was making steps toward improving the climate.

There were some “outspoken folks” at the University and clear cases of homophobia despite non-discrimination policies, said alumnus John Gustav-Wrathall, who served on the committee.

Around the same time, Congress and the states strengthened their hate crime laws.

In an atmosphere paved by generations before him, Haslerud said he’s experiencing a different climate than his foster dad did.

“We hope that we have full marriage equality in the state by the time Will and Glen get married,” Gustav-Wrathall said.

Haslerud and Black plan to travel to Iowa to marry if the bill to repeal Minnesota’s 1997 statute banning same-sex marriage doesn’t pass in the Legislature.

“It would be very exciting for our own marriage to be recognized in our home state,” said Flessert, one of the engaged seniors.

Part of a national conversation

Baker and McConnell’s case came up this year at the Supreme Court — this time in arguments about overturning the federal Defense of Marriage Act and California’s Proposition 8.

Gustav-Wrathall married his partner in California in 2008, before the state’s same-sex marriage ban was passed.

Justices indicated they’re likely to strike down DOMA, which defines marriage as between a man and woman for federal benefits.

The court’s decision is due next month.

In the past decade, the nation’s approval of same-sex marriage has increased by 16 percentage points, according to the Pew Research Center. Now, two-thirds support it.

“The issue has been around for a while, and people have had a long time to think about it,” said Kathleen Hull, a sociology associate professor who specializes in social movements, gender and sexuality studies.

Even if DOMA is struck down, that would not allow same-sex couples in Minnesota to claim benefits because the state’s law stops them from legally marrying.

And by May 20, 201 state legislators will have to decide whether to change that and legally recognize unions like those of Flessert and Miller, and Haslerud and Black.

“I sometimes wish I was straight only because it would make my life easier,” Haslerud said. “I would have a hundred percent of my human rights.”

These engaged couples aren’t alone — they’re surrounded by more than 3,500 same-sex couples in Minneapolis, according to 2010 U.S. Census data, compiled by the Williams Institute, and Hennepin County has the highest number of same-sex couples in the state.

“Here in the Twin Cities, it’s largely not a big deal,” Gustav-Wrathall said. “There’s a lot of acceptance. In my day-to-day life, I’m not having to deal with homophobia.”

A February Star Tribune poll found 57 percent of people in the metro area think same-sex marriage should be legal.

“Every day I walk around, and I really feel like my life looks like everyone else’s,” alumna Amanda Tufano said of her fiancée.

“We garden together, watch the news, show up at work every day, pay our bills and taxes and we love each other. It’s totally the same to me. I forgot it was different until all this marriage discussion came up.”

Outside the Twin Cities, however, three-quarters of Minnesotans are against it.

“There are very strong feelings both ways,” he said.

Opponents have fought long and hard to keep traditional marriages in the state, often for religious reasons.

“When I hear it’s because of religious reasons that they’re against my lifestyle, it makes me angry,” Haslerud said. “I didn’t make a choice at this.”

He said it’s important for opponents of same-sex marriage to understand they don’t have to agree with his lifestyle but just have to see that he’s being denied rights.

“It’s not that I want holy matrimony,” Black said. “I want a legal marriage.”

Faust, an out-state Lutheran pastor, announced his support for the legislation Monday.

The House’s bill cleared a committee on Monday, and the Senate’s version is set to get a hearing in the Finance Committee on Tuesday.

Legislators are reviewing the state’s cost for the legalized marriages — estimated to be $678,000 annually.

“It’s kind of out of our hands right now,” Haslerud said.

University political science professor Kathryn Pearson said legislators are listening to what constituents are telling them but also thinking about how history will judge their vote.

“When women got the right to vote, that wasn’t the end of a movement — that was the start,” said Humphrey School alumna Laura McCarty, a board member for OutFront Minnesota. “It’s not over yet.”

The trends of growing acceptance will only continue, experts say, so legislators want to make sure they keep up with the changing public opinion.

“We’ve seen people grow to accept same-sex marriages at a much more rapid pace than any other public policy issue in the modern times,” Pearson said.

Gov. Mark Dayton said he will sign the bill if it makes it to him.

“I will put my wedding dress back on and go back and stand in line at the courthouse on August 1 if that’s what happens,” McCarty said. “I want to be recognized and legalize it as soon as I possibly can.”

Either way, McCarty and her fiancée, Tufano, are planning a wedding ceremony next month in the rotunda of Minneapolis City Hall.

“We’ll have a ceremony and a dance,” she said, “and it will look just like every other wedding ceremony.” 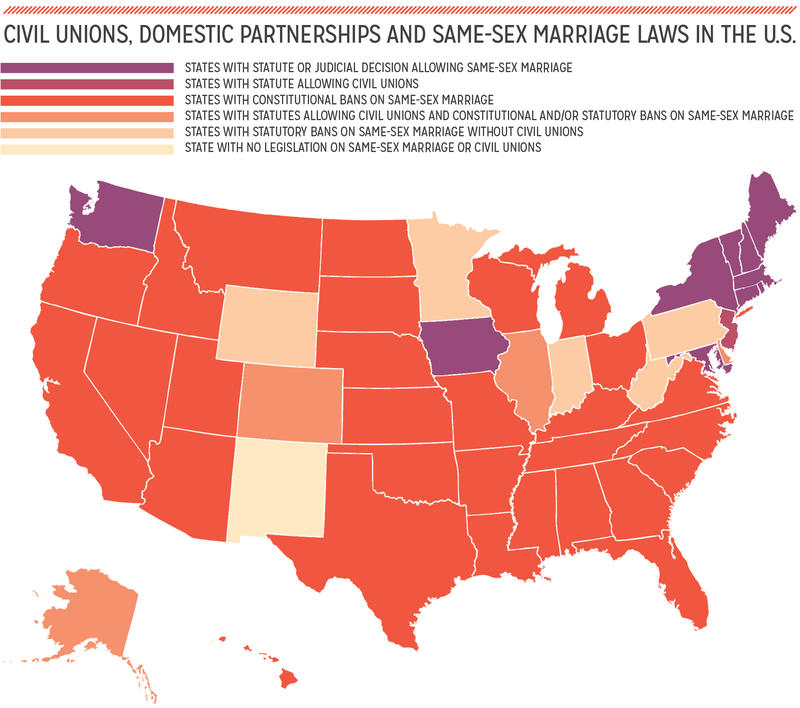 Flessert said he wants to get his teaching license from the University so he can teach high school students about LGBT rights and help those who face challenges because of their sexual orientation.

They’re students like Haslerud, who struggled growing up as a homosexual teen and had parents who didn’t fully accept homosexuality.

He said he felt uncomfortable about sharing his homosexuality in a home where his father disapproved of such relationships, calling them “disgusting.”

But his father passed away when Haslerud was 13 and never knew his son’s sexual orientation.

Haslerud was placed in foster care soon after, eventually living with the Gustav-Wrathalls, who used their own experiences to help him.

Flessert said it’s the everyday discrimination in society that makes the same-sex marriage conversation so important, and legalizing it in the state would be a milestone for LGBT people.

“It doesn’t stop at marriage,” he said. “In the whole grand scheme of things, marriage is just symbolic of legal things that make our life easier, but a lot of people can get by without marriage.”

Marriage is more than just a piece of paper, he said — it’s an equality issue.

At the time of Baker and McConnell’s union in 1970, McConnell predicted it would take 30 years for same-sex couples to legally marry.

Now both 70, the pair has stepped out of the public eye, and a new generation is fighting for same-sex marriage, which, by McConnell’s standards, is overdue.

“Working together, Minnesotans used the power of ideas to define the Modern Gay Movement,” Baker wrote in a 2012 blog post. “Michael McConnell and I remain proud to have ignited a dream that continues to transform an entire world.”