It is entirely possible for us to find alternative sources that will even out the market for our transportation fuels. It’s even possible for us to make that fuel from sustainable sources. But we would still be left with an incredible 140 billion gallons per year of gasoline, about 1,200 per household, consumed simply getting around. Nevermind that at the end of the day most of us end up exactly where we started off.

Any drive to long-term sustainability has to include conservation. Even if we can make a tremendous amount of fuel from cropland we need energy for electricity and heat as well. Consuming less will always be important, and as the price of fuel rises we are in fact using less of it all the time. But to really drop our consumption we need new technology. Fortunately, at least one is nearly ready for prime-time – the turbine electric hybrid. 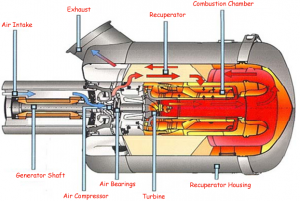 The most advanced small turbine suitable for use in transportation, among other things, come from Capstone company. They are called “microturbines” because they are as small as 30kW (40 hp). With only one moving part, an electric generator is built right into the system.

The main advantage of the Capstone system is that it operates at very high temperatures and pressures, giving it 36% efficiency at full throttle. That’s better than double what can ever be obtained by a conventional “Otto Cycle” piston engine.

The conventional car engine was first made practical in the 1880s, and despite some major improvements it remains very similar. It’s a big block of steel with heavy pistons that have to stop and change momentum twice per engine revolution. Between those inefficiencies and the limit set by temperature at which the metal melts, they can never get better than 16% efficiency.

What makes this microturbine technology possible is not just the ingenious Capstone design, but the advance of ceramic technology in the last 20 years.

Why hasn’t this powerplant been more widely implemented already? The Chrysler corporation worked very hard on a turbine powered car in the 1960s, even before advanced ceramics. The main problem is that a turbine is very slow to get up to speed, requiring it to remain at high idle even when sitting at a stoplight. The trade-off was always incredibly sluggish acceleration in city traffic or fuel consumption that showed no benefit for the more expensive technology at all. It was eventually abandoned.

With the advance of hybrid electric systems, however, the problem is solved. Batteries can store enough electricity to drive electric motors as the turbine brings itself up to speed gradually, replenishing the charge. The turbine electric engine needed two very new techs before it became practical for road transportation.

In the last six years, many road-ready vehicles have been made from Capstone microturbines in a hybrid system. The most prominent are the buses in New York, manufactured by DesignLine of New Zealand. At 7 miles per gallon they hardly seem fuel efficient, but that’s double what any piston-powered hybrid has been able to reach.

Cars are a bit trickier, but the Whisper Eco-Logic from the UK has shown it is possible. Achieving 80 miles per gallon in a decent sized minivan is no small achievement, especially given that this is the first generation. The CMT-380 “supercar” was designed to impress in a different way, reaching 60 miles per hour from a dead stop in 3.9 seconds – but still gets 45 MPG in turbine-only mode.

The improvements from a turbine electric hybrid are a doubling of fuel economy, considerably lower weight (about 500 pounds in a car) and dramatically lower maintenance. Cost will certainly be higher, but given that these have never been mass it is unclear exactly how much more expensive the system will be. Given the 1,200 gallons of gasoline per household per year, however, the potential savings from double the mileage is on the order of $2,400 per year, offsetting additional costs.

Given that the average over the entire US is still a shade over 20 miles per gallon as more efficient cars are still working their way into the system, our ever decreasing gasoline addiction has nowhere to go but down. Turbine electric hybrids have the potential to dramatically improve that trend. This technology, or really basket of technologies, is still being developed but we can expect it to be a major part of our transportation future. The best source of energy is not renewables, but not consuming it in the first place.

The 130 year old piston based technology that we all rely on to get around may soon be obsolete. What it will take, like all three of the proven techs discussed here, is a bit more development and investment. And that’s what we will talk about next.