There is nothing more fundamental to the health of economy than energy costs, particularly the price of gasoline. There are more important things in life, especially food, but that cost does not rise and fall as rapidly and unpredictably as the cost of the gasoline that keeps our whole system running.

This is the first in a small series on energy in the US, focusing on energy independence and renewables.

The cost of gasoline is determined by a very open market that is functioning about as well as it can. A critical analysis of this market shows that there are key trends that will constantly drive up the price in narrow bands. The largest problems with this market are barriers to entry, in particular the available refineries, and the single source of raw material in the form of crude. Opening up this system to new technologies and sources of energy is the only way it can be improved to produce more stable, reliable costs.

There is little doubt that the world is running low on crude oil. That is not to say that we will run out of it tomorrow, but it does mean that the price of it will increase with time as sources become more scarce and expensive – and demand in the developing world ratchets up. Here is the price of “West Texas Intermediate”, a benchmark oil price from the oil patch, since 1985: 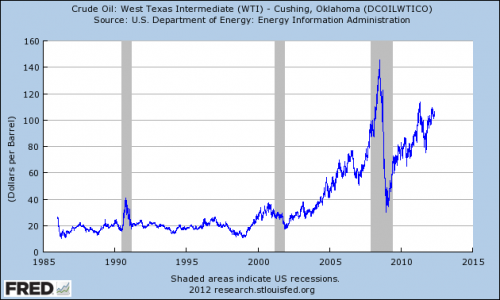 Note that the price was rather stable until about 1998, when it started to take off dramatically. The big rise has been since about 2005, which is worth highlighting in a separate chart: 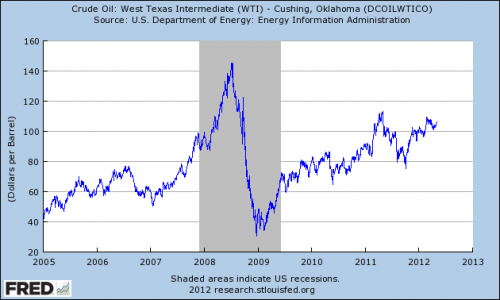 Here we can see that the price rise is not a constant slope upward, but a ragged series of spikes and sudden, steep drops. The peak, after the start of the official recession in 2007, is the brief “commodities bubble”. That was the last gasp of the stock bubble, credit bubble, housing bubble, and every other kind of bubble that worked through our economy. It was caused largely by speculation in oil futures, a big part of the spikes.

But there is much more to it than that. Note that recently the price has hit $110 per barrel in 2011, only to fall back to $80 before rising again. This is explained at least in part by the fact that there are many oil wells, especially around Texas, that have had the easy oil that bubbles right out of the ground taken out of them. What’s left behind requires advanced technology like angled drilling, high pressure steam, and so on – it’s a lot more expensive. When oil hits $110 a barrel it’s worth it to bring these wells online, slowly, and the price drops.

Crude oil production in the US is up 24% since Obama took office. The United States is now the third largest producer of crude oil, behind only Russia and Saudi Arabia.

Swings like this are supposed to be taken care of with oil futures, or the ability to buy tomorrow’s oil today with a long-term contract. The fact that we have such a huge cycle shows that the futures market is not functioning as it is supposed to. But the overall market for oil is operating about as well as can be expected, given the circumstances.

But that is not all there is to gasoline. Crude oil has to be refined, or broken down to a chemical form easily handled and burned. California keeps careful track of all these costs, and has found that of the $4.19 paid at the pump $2.85 is crude oil, with the refining process and profits, etc, adding about $0.68 to the cost. The rest is distribution, retailing, and taxes.

As gasoline consumption in the US keeps dropping, now at a 15 year low, we have found ourselves with excess refining capacity for the first time anyone can remember. Some of that is shutting down because it is not designed to handle higher sulfur oil, relying instead on more expensive grades of crude. Refineries in the Northeast in particular have to rely on “Brent” crude from the North Sea, and they can’t compete. Combined with sales of refined gasoline abroad, excess refinery capacity is being kept in check by market forces.

In total, the market for our motor vehicle fuel is defined by a few characteristics. The price is constantly increasing, but subject to spikes when the price gets to a level where new resources are added. Speculation appears to have over-run the potential evening out that the futures market should provide. Running against these trends is improved conservation.

The market for oil is functioning about as well as can be expected, given that it all comes from one diminishing resource whose cost of production and worldwide demand are rising constantly. The only thing that can fix this market are new sources of raw materials, provided by new technologies. That is what we will examine next.